Urges No On Millage 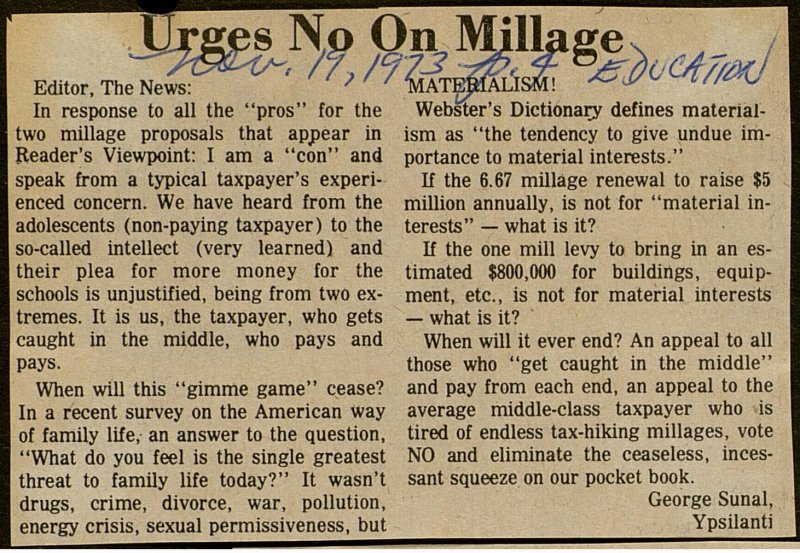 Editor, The News: In response to all the "pros" for the two millage proposals that appear in Reader's Viewpoint: I am a "con" and speak from a typical taxpayer's experienced concern. We have heard from the adolescents (non-paying taxpayer) to the so-called intellect (very learned) and their plea for more money for the schools is unjustified, being from two extremes. It is us, the taxpayer, who gets caught in the middle, who pays and pays. When will this "gimme game" cease? In a recent survey on the American way of family life, an answer to the question, "What do you feel is the single greatest threat to family life today?" It wasn't drugs, crime, divorce, war, pollution, energy crisis, sexual permissiveness, but faÁTEÍALIStá! JlyfPV Webster's Dictionary defines matenalism as "the tendency to give undue importance to material interests." If the 6.67 millage renewal to raise $5 million annually, is not for "material interests" - what is it? If the one mili levy to bring in an estimated $800,000 for buildings, equipment, etc., is not for material interests - what is it? When will it ever end? An appeal to all those who "get caught in the middle" and pay f rom each end, an appeal to the average middle-class taxpayer who is tired of endless tax-hiking millages, vote NO and elimínate the ceaseless, incessant squeeze on our pocket book.