Will Vote 'No' On Center 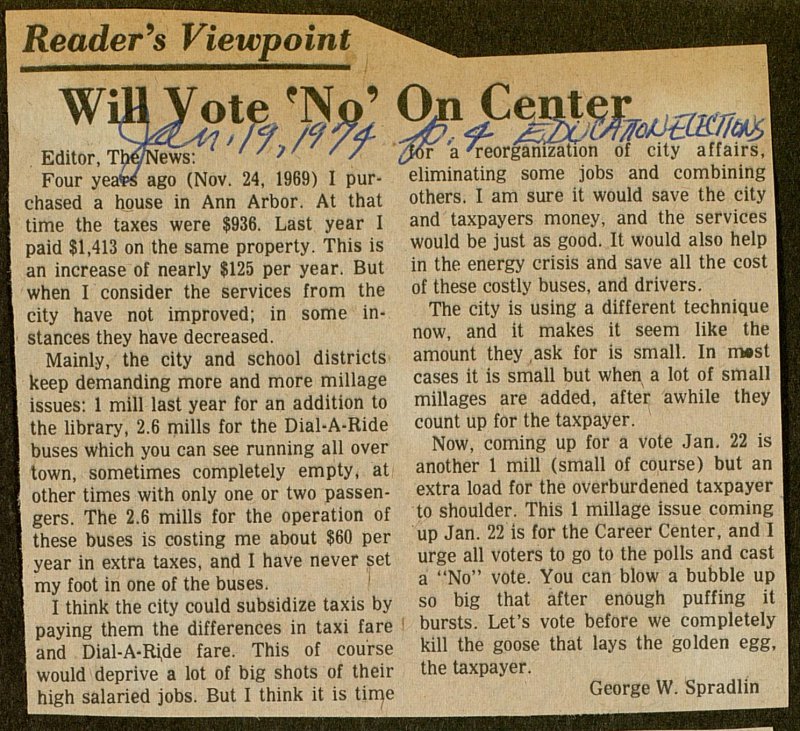 Editor, ThNews: ' ' ' Four yeaw ago (Nov. 24, 1969) I purchased a house in Ann Arbor. At that time the taxes were $936. Last year I paid $1,413 on the same property. This is an increase of nearly $125 per year. But when I consider the services from the city have not improved; in some instances they have decreased. I Mainly, the city and school districts I keep demanding more and more millage I issues: 1 mili last year for an addition to I the library, 2.6 milis for the Dial-A-Ride I buses which you can see running all over I town, sometimes completely empty, at I other times with only one or two passenI gers. The 2.6 milis for the operation of I these buses is costing me about $60 per I year in extra taxes, and I have never set I my foot in one of the buses. I think the city could subsidize taxis by I paying them the differences in taxi fare I and Dial-A-Ride fare. This of course ■ would deprive a lot of big shots of their ■ high salaried jobs. But I think it is tirne ór 'a 'reorganization of city affairs, I eliminating some jobs and combining I others. I am sure it would save the city I and taxpayers money, and the services I would be just as good. It would also help I in the energy crisis and save all the cost I of these costly buses, and drivers. ; The city is using a different technique I now, and it makes it seem like the I amount they ,ask for is small. In mst I cases it is small but when a lot of small I millages are added, after awhile they count up for the taxpayer. Now, coming up for a vote Jan. 22 is another 1 mili (small of course) but an extra load for the overburdened taxpayer to shoulder. This 1 millage issue coming up Jan. 22 is for the Career Center, and I urge all voters to go to the polls and cast a "No" vote. You can blow a bubble up so big that after enough puffing it ! bursts. Let's vote before we completely kill the goose that lays the golden egg, the taxpayer.