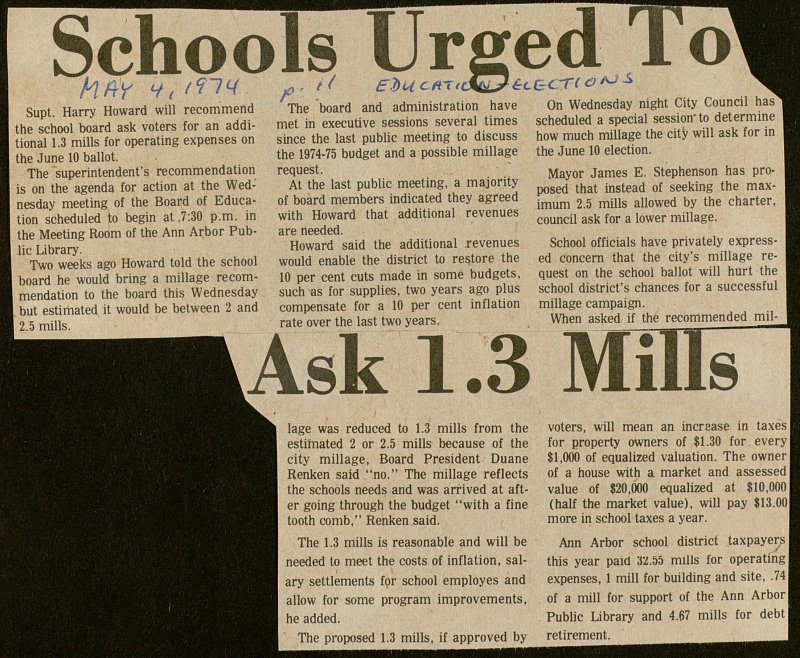 rtrtr y , ' ' -f Supt. Harry Howard will recommend the school board ask voters for an additional 1.3 milis for operating expenses on the June 10 ballot. The superintendent's recommendation is on the agenda for action at the Wednesday meeting of the Board of Education scheduled to begin at ,7:30 p.m. in I the Meeting Room of the Ann Arbor PubI lic Library. Two weeks ago Howard told the school I board he would bring a millage recomI mendation to the board this Wednesday I but estimated it would be between 2 and I 2.5 milis. The board and administration have met in executive sessions several times since the last public meeting to discuss the 1974-75 budget and a possible millage request. At the last public meeting, a majority of board members indicated they agreed with Howard that additional revenues are needed. Howard said the additional .revenues would enable the district to restore the 10 per cent cuts made in some budgets, such as for supplies, two years ago plus compénsate for a 10 per cent inflation ra te over the last two years. On Wednesday night City Council has scheduled a special session-to determine I how much millage the city will ask for in I the June 10 election. Mayor James E. Stephenson has proI posed that instead of seeking the maxI imum 2.5 milis allowed by the charter, I council ask for a lower millage. School officials have privately I ed concern that the city's millage I quest on the school ballot will hurt the I school district's chances for a successful I millage campaign. When asked if the recommended I ' lage was reduced to 1.3 milis f rom the I estimated 2 or 2.5 milis because of the I city millage, Board President Duane I Renken said "no." The millage reflects I the schools needs and was arrived at aftI er going through the budget "with a fine I tooth comb," Renken said. The 1.3 milis is reasonable and will be I needed to meet the costs of inflation, salI ary settlements for school employés and I allow for some program improvements, I he added. I " The proposed 1.3 milis, if approved by 1 m W MÉMMÍ voters, will mean an increase in taxes for property owners of $1.30 for every $1,000 of equalized valuation. The owner of a house with a market and assessed value of $20,000 equalized at $10,000 (half the market value), will pay $13.00 more in school taxes a year. Ann Arbor school district taxpayers this year paid 32.55 milis for operatingl expenses, I mili for building and site, .741 of a mili for support of the Ann Arbor I Public Library and 4.67 milis for debtl retirement.