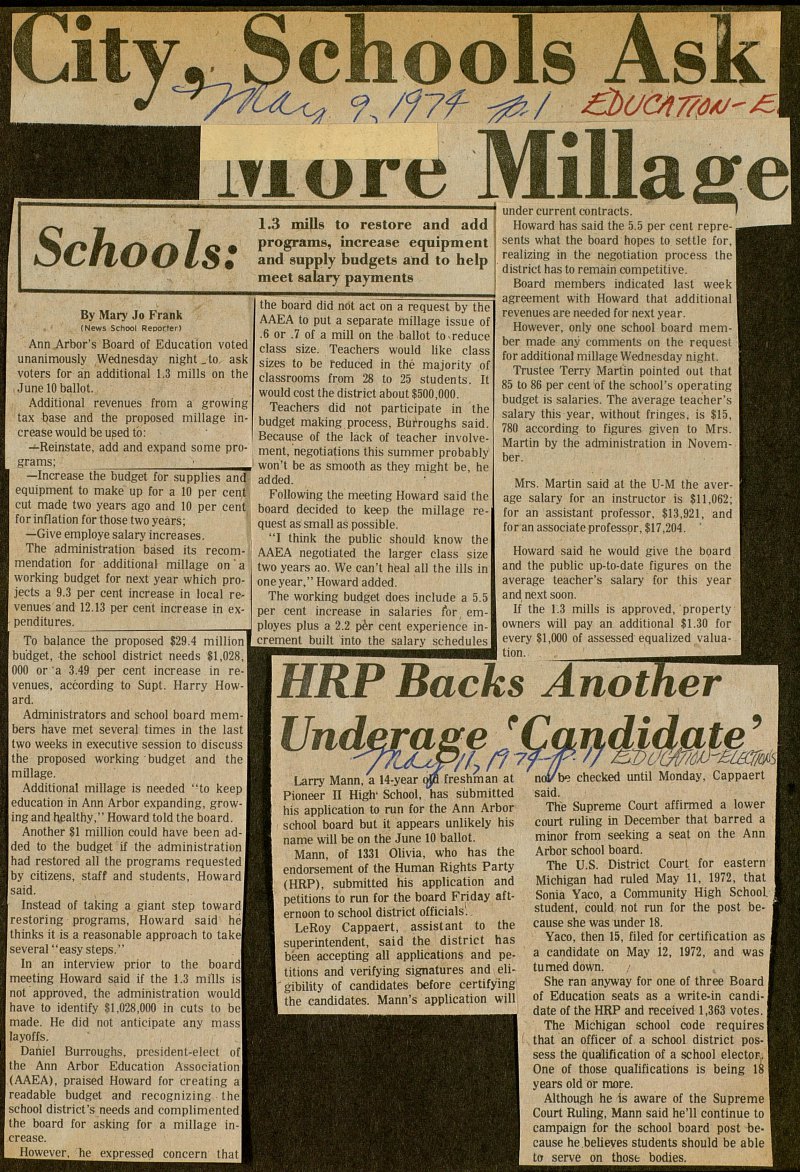 1.3 milis to restore and add programs, increase equipment and supply budgets and to help meet salary payments Ann Arbor's Board of Education voted unanimously Wednesday night_to, ask voters for an additional 1.3 milis on the , June 10 ballot. Additional revenues from a growing tax base and the proposed millage increase would be used tb: - Reinstate, add and expand some programs; ' I - Increase the budget for supplies and, equipment to make" up for a 10 per een? cut made two years ago and 10 per cent for inflation for those two years; - Give employé salary increases. The administration based its ! mendation for additional millage on ' a working budget for next year which projects a 9.3 per cent increase in local revenues and 12.13 per cent increase in exI penditures. To balance the proposed $29.4 million budget, the school district needs $1,028,1 000 or a 3.49 per cent increase in re-I venues, according to Supt. Harry 1 ard. Administrators and school board 1 bers have met several times in the last I two weeks in executive session to discuss I the proposed working budget and the I millage. Additional millage is needed "to keep I education in Ann Arbor expanding, 1 ing and healthy," Howard told the board, f Another $1 million could have been 1 ded to the budget if the administration I had restored all the programs requestedl by citizens, staff and students, Howardl said. l i Instead of taking a giant step towardl restoring programs, Howard said hél thinks it is a reasonable approach to takel several "easy steps." I In an interview prior to the boardl meeting Howard said if the 1.3 milis isl not approved, the administration wouldl have to identify $1.028,000 in cuts to bel made. He did not anticípate any massl layoffs. f Daniel Burroughs, president-elect ofl the Ann Arbor Education Associationl (AAEA), praised Howard for creating al readable budget and recognizing thel school district 's needs and complimentedl the board for asking for a millage in-I crease. However, he expressed concern that the board did not act on a request by the AAEA to put a separate millage issue of .6 or .7 of a mili on the ballot reduce class size. Teachers would like class sizes to be feduced in thé majority of classrooms from 28 to 25 students. It would cost the district about $500,000. Teachers did not particípate in the budget making process, Burroughs said. Because of the lack of teacher involvement, negotiations this summer probably won't be as smooth as they might be, he added. Following the meeting Howard said the board decided to keep the millage request as small as possible. "I think the public should know the AAEA negotiated the larger class size two years ao. We can't heal all the ills in oneyear," Howard added. The working budget does include a 5.5 per cent increase in salaries for employés plus a 2.2 pèr cent experience inLrernent built into the salary schedules I under current contracts. I Howard has said the 5.5 per cent m sents what the board hopes to settle for, I realizing in the negotiation process the ■ district has to remain competitive. Board members indicated last week ■ agreement with Howard that additional I revenues are needed for next year. However, only one school board I ber made any comments on the request I for additional millage Wednesday night. Trustee Terry Martin pointed out that I 85 to 86 per cent of the school's operating I budget is salaries. The average teacher's I salary this year, without fringes, is $15, I 780 according to figures given to Mrs. I Martin by the administration in I ber. Mrs. Martin said at the U-M the I age salary for an instructor is $11,062; I for an assistant professor, $13,921, and I for an associate professor, $17,204. Howard said he would give the board I and the public up-to-date figures on the I average teacher's salary for this year I and next soon. If the 1.3 milis is approved, property I owners will pay an additional $1.30 for I every $1,000 of assessed equalized valúaI tion. ' I