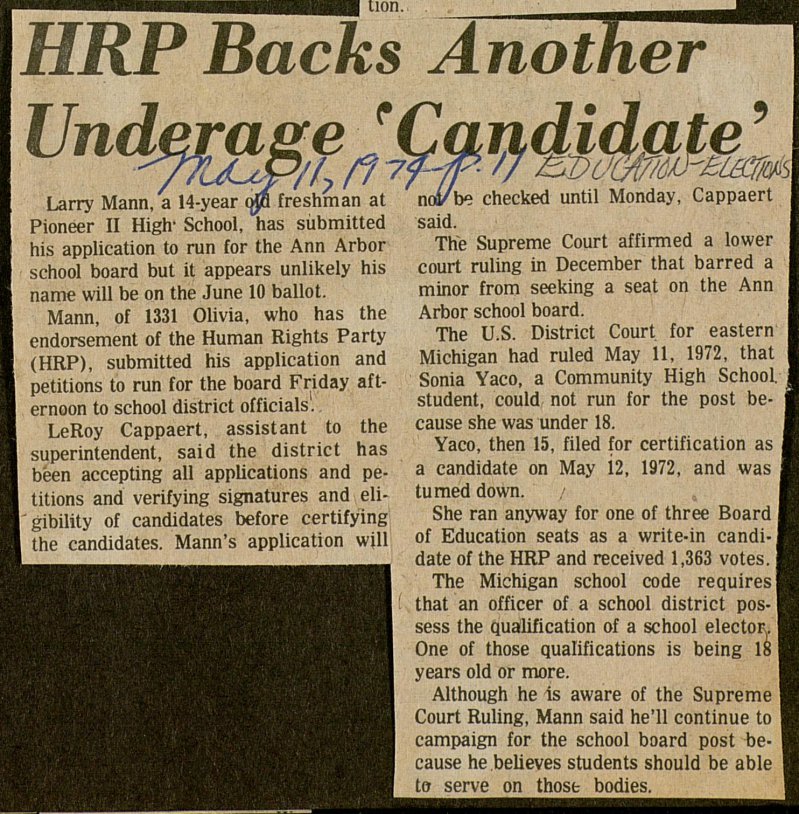 ■'uLtyiy n Larry Mann, a 14-year ojfl freshman at Pioneer II School, has siibmitted his application to run for the Ann Arbor school board but it appears unlikely his 1 name will be on the June 10 ballot. Mann, of 1331 Olivia, who has the endorsement of the Human Rights Party (HRP), submitted his application and i petitions to run for the board Friday aftI ernoon to school district officials. . LeRoy Cappaert, assistant to the I superintendent, said the district has I been accepting all applications and peI titions and verifying signatures and elil'gibility of candidates bef ore certifying I the candidates. Mann's application wjll 7rn ' ycyizoAjLÉCfm noíbe checked until Monday, Cappaert said. The Supreme Court affirmed a lower court ruling in December that barred a minor from seeking a seat on the Ann Arbor school board. The U.S. District Court for eastern Michigan had ruled May 11, 1972, that Sonia Yaco, a Community High School, student, could not run for the post I cause she was under 18. I Yaco, then 15, filed for certification as j a candidate on May Í2, 1972, and was j tumed down. I She ran anyway for one of three Board I of Education seats as a write-in 1 date of the HRP and received 1,363 votes. I The Michigan school code requiresl I that an officer of a school district pos-I sess the qualification of a school elector,. I One of those qualifications is being 18 I years old or more. Although he ds aware of the Supreme I Court Ruling, Mann said he'll continue to I campaign for the school board post I cause he believes students should be able I to serve on those bodies.