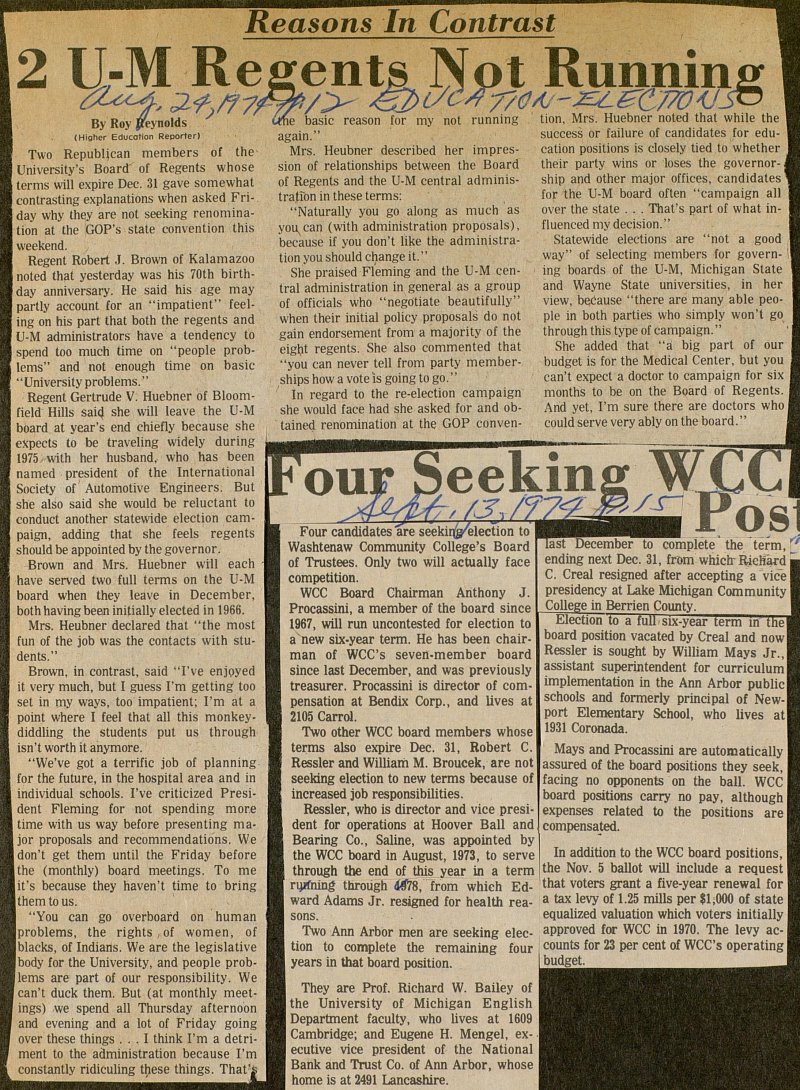 Two Republjcan members of theUniversity's Board' of Regents whose terms will expire Dec. 31 gave somewhat contrasting explanations when asked Friday why they are not seeking renomination at the GOP's state convention this weekend. Regent Robert J. Brown of Kalamazoo noted that yesterday was his 70th birthday anniversary. He said his age may partly account for an "impatient" feeling on his part that both the regents and lü-M administrators have a tendency to spend too much time on "people probI lems" and not enough time on basic "üniversity problems." Regent Gertrude V. Huebner of Bloomfield Hills said she will leave the U-M board at year's end chiefly because she expects to be traveling widely during L 1975 with her husband, who has been named president of the International I Society of Automotive Engineers. But I she also said she would be reluctant to I conduct another statewide election I paign, adding that she feels regents I should be appointed by the governor. Brown and Mrs. Huebner will each I have served two full terms on the U-M I board when they leave in December, I both having been initially elected in 1966. Mrs. Heubner declared that "the most I fun of the job was the contacts with I dents." Brown, in contrast, said 'Tve enjpyed I it very much, but I guess I'm getting too I set in my ways, too impatient; I'm at a I point where I feel that all this I diddling the students put us through ] isn't worth it anymore. "We've got a terriñc job of planning for the future, in the hospital área and in i individual schools. I've criticized President Fleming for not spending more I time with us way before presenting maI jor proposals and recommendations. We Idon't get them until the Friday before Ithe (monthly) board meetings. To me lit's because they haven't time to bring Ithemtous. I "You can go overboard on human j Iproblems, the rights , of women, of I Iblacks, of Indians. We are the legislative I Ibody for the Üniversity, and people I llems are part of our responsibility. We I [can't duck them. But (at monthly I I ings) we spend all Thursday afternoon I and evening and a lot of Friday going I over these things ... I think I'm a I ment to the administration because I'm I constantly ridiculing these things. That's I ■ %_J me basic reason for my not running again." Mrs. Heubner described her impression of relationships between the Board of Regents and the U-M central administration in these terms: "Naturally you go along as much as you, can (with administration proposals), because if you don't like the administration you should change it." She praised Fleming and the U-M central administration in general as a group of officials who "negötiate beautifully" when their initial policy proposals do not gain endorsement from a majority of the eight regents. She also commented that "you can never teil from party memberships how a vote ïs going to go." In regard to the re-election campaign she would face had she asked for and obtained renomination at the GOP tion, Mrs. Huebner noted that while the I success or failure of candidates for I catión posiüons is closely tied to whether I their party wins or loses the J ship and other major offices, candidates 1 for the U-M board often "campaign all 1 over the state . . . That's part of what I fluenced my decisión." Statewide elections are "not a good I way" of selecting members for ! ing boards of the U-M, Michigan State ! and Wayne State universities, in her view, beCause "there are many able people in both parties who simply won't go throughthis type of campaign." 'j She added that "a big part of our budget is for the Medical Center, but you can't expect a doctor to campaign for six I months to be on the Board of Regents. I And yet, I'm sure there are doctors who I could serve very ably on the board . ' ' - i ; I