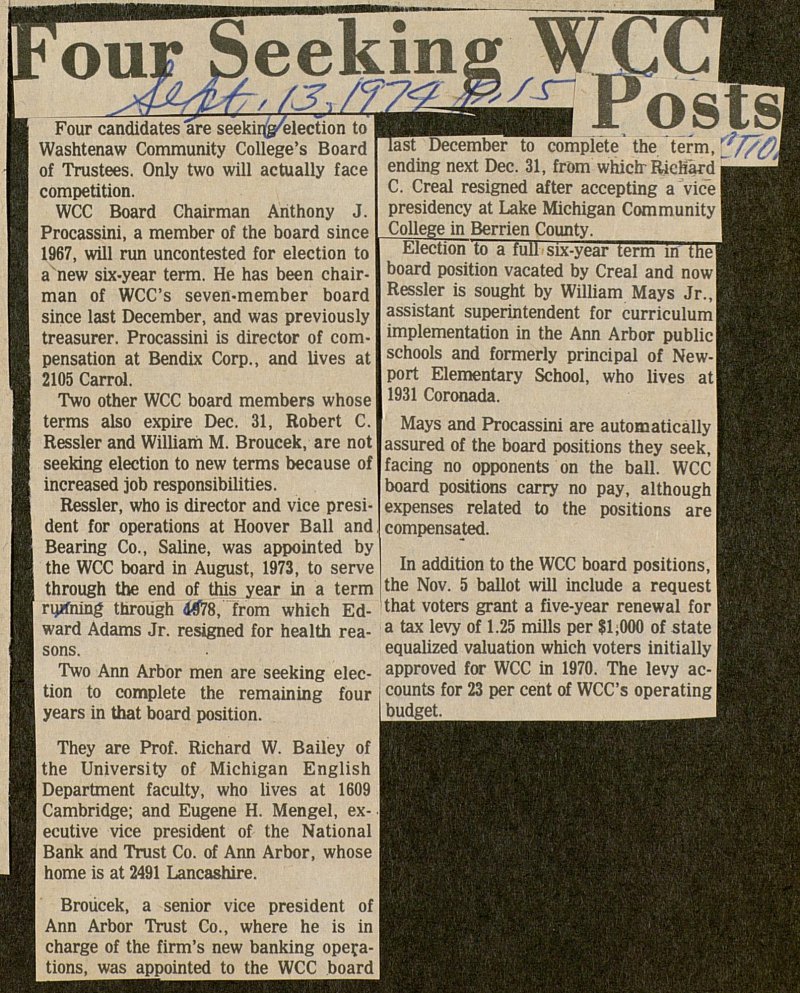 Four candidates "are seekinjj'élection to I Washtenaw Community College's Board of Trustees. Only two will actually face competition. WCC Board Ghairman Anthony J. Procassini, a member of the board since 1967, will run uncontested for election to a new six-year term. He has been chairman of WCC's seven-member board since last December, and was previously treasurer. Procassini is director of compensation at Bendix Corp., and Uves at 2105 Carrol. Two other WCC board members whose terms also expire Dec. 31, Robert C. Ressler and William M. Broucek, are not seeking election to new terms because of increased job responsibilities. Ressler, who is director and vice president for operations at Hoover Ball and Bearing Co., Saline, was appointed by the WCC board in August, 1973, to serve through the end of this year in a term ruiftüng through 4Í78, '"f rom which Edward Adams Jr. resigned for health reasons. Two Ann Arbor men are seeking election to complete the remaining four years in that board position. They are Prof. Richard W. Bailey of the University of Michigan English Department faculty, who lives at 1609 Cambridge; and Eugene H. Mengel, ■ ecutive vice president of the National Bank and Trust Co. of Ann Arbor, whose home is at 2491 Lancashire. Broúcek, a senior vice president of Ann Arbor Trust Co., where he is in charge of the firm's new banking oper. ations, was appointed to the WCC board last December to complete the term, ending next Dec. 31, from which: RicHard C. Creal resigned af ter accepting a vice presidency at Lake Michigan Community College in Berrien County. Election to a full six-year term m thel board position vacated by Creal and nowl Ressler is sought by William Mays Jr., assistant superintendent for curriculum implementation in the Ann Arbor public schools and formerly principal of Newport Elementary School, who lives at 1931 Coronada. Mays and Procassini are automaticálly assured of the board positions they seek, facing no opponents on the ball. WCC board positions carry no pay, although expenses related to the positions are compensated. In addition to the WCC board positions, the Nov. 5 ballot will include a request that voters grant a five-year renewal for a tax levy of 1.25 milis per $1;000 of state equalized valuation which voters initially approved for WCC in 1970. The levy aci counts for 23 per cent of WCC's operating budget. I