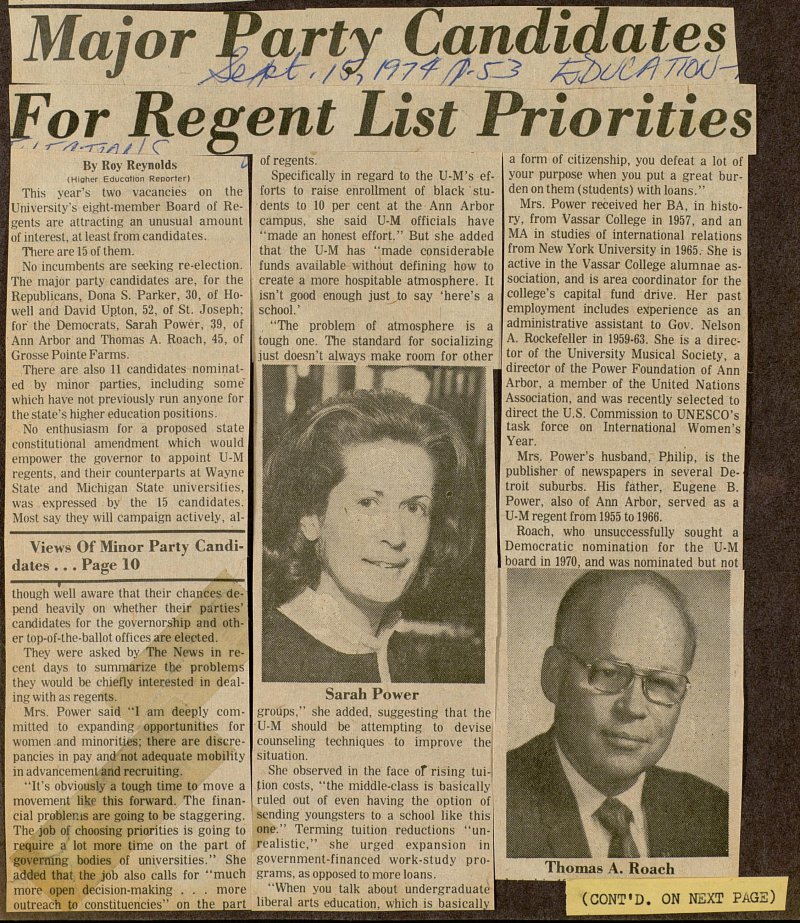 This year's two vacancies on the University's eight-member Board of Regents are attracting an unusual amount of interest, at least from candidates. Tliere are 15 of them. No incumbents are seeking re-election. The major party candidates are, for the Republicans, Dona S. Parker, 30, of Howell and David Upton, 52, of St. Joseph; for the Democrats, Sarah Power, 39, of Ann Arbor and Thomas A. Roach, 45, of Grosse Pointe Farms. There are also 11 candidates nominated by minor parties, including some" which have not previously run anyone for the state's higher education positions. No enthusiasm for a proposed state constitutional amendment which would empower the governor to appoint U-M regents, and their counterparts at Wayne State and Michigan State universities, was expressed by the 15 candidates. Most say they will campaign actively, alViews Of Minor Party Candidates . . . Page 10 though well aware that their chances depend heavily on whether their parties' candidates for the governorship and other top-of-the-ballot offices are elected. They were asked by The News in recent days to summarize the problems they would be chiefly interested in dealing with as regents. Mrs. Power said "I am deeply committed to expanding opportunities for women and minorities; there are discrepancies in pay and not adequate mobility in advancement and recruiting. "It's obviously a tough time to move a movement like this forward. The financial problems are going to be staggering. The job of choosing priorities is going to require a lot more time on the part of governing bodies of universities." She added that. the job also calis for "much more open decision-making . . . more outreach to constituencies'l_gn_the_p_art_ of regen ts. Specifically in regard to the U-M's efforts to raise enrollment of black students to 10 per cent at the Ann Arbor campus, she said U-M officials have "made an honest effort." But she added that the U-M has "made considerable funds available without defining how to créate a more hospitable atmosphere. It isn't good enough justjo say 'here's a school.' "The problem of atmosphere is a tough one. The standard for socializing just doesn't always make room for other ■; ww mam niiiii mi i groups," she added, suggesting that the U-M should be attempting to devise counseling techniques to improve thei situation. She observed in the face of rising tui-j (ion costs, "the middle-class is basically ruled out of even having the option of sending youngsters to a school like this one." Terming tuition reductions "unrealistic," she urged expansión in government-financed work-study programs, as opposed to more loans. "When you talk about undergraduatë I liberal arts education, which is basically I a form of citizenship, you defeat a lot of I your purpose when you put a great 1 denonthem (students) with loans." Mrs. Power received her BA, in 1 ry, from Vassar College in 1957, and an I MA in studies of international relations I from New York University in 1965. She is I active in the Vassar College alumnae I sociation, and is area coördinator for the I college's capital fund drive. Her past I employment includes experience as an I administrative assistant to Gov. Nelson I A. Rockefeller in 1959-63. She is a I tor of the University Musical Society, a I director of the Power Foundation of Ann j Arbor, a member of the United Nations I Association, and was recently selected to I direct the U.S. Commission to UNESCO's I task f orce on International Women's I Year. Mrs, Power's husband, Philip, is the I publisher of newspapers in several De-1 troit suburbs. His father, Eugene B. I Power, also of Ann Arbor, served as a I U-M regent from 1955 to 1966. Roach, who unsuccessfully sought a I Democratie nomination for the U-M I board in 1970, and was nominated but not I (CONT'D. ON NEXT PAG5) j