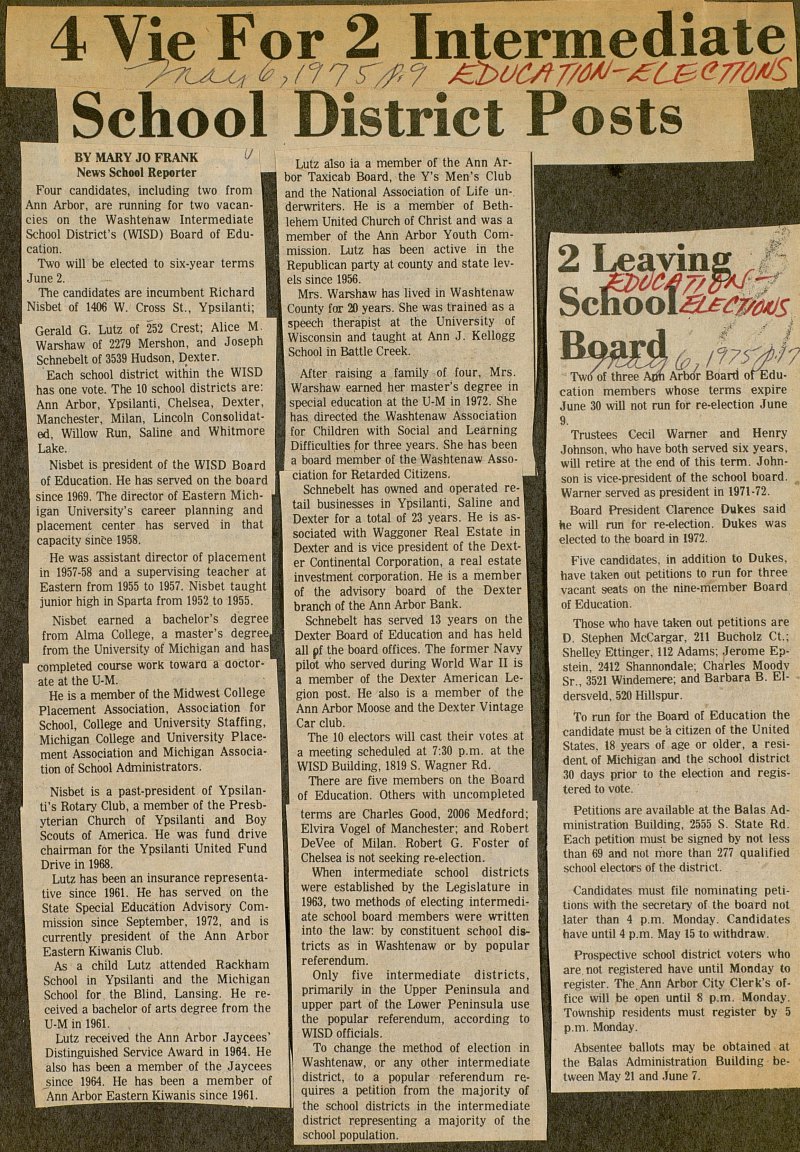 Four candidates, including two from ■ nn Arbor, are running for two vacanH :ies on the Washtenaw Intermedíate I School District's (WISD) Board of EduI catión. Í 1 Two will be elected to six-year terms I June 2. The candidates are incumbent Richard Nisbet of 1406 W. Cross St., Ypsilanti; ■ Gerald G. Lutz of 252 Crest; Alice M. Warshaw of 2279 Mershon, and Joseph Schnebelt of 3539 Hudson, Dexter. Each school district within the WISD has one vote. The 10 school districts are: Ann Arbor, Ypsilanti, Chelsea, Dexter, Manchester, Milan, Lincoln Consolidated, Willow Run, Saline and Whitmore Lake. Nisbet is president of the WISD Board of Education. He has served on the board since 1969. The director of Eastern Michigan University's career planning and placement center has served in that capacity since 1958. He was assistant director of placement in 1957-58 and a supervising teacher at Eastern from 1955 to 1957. Nisbet taught junior high in Sparta from 1952 to 1955. Nisbet earned a bachelor's degree from Alma College, a master's degree from the University of Michigan and has completed course work towara a doctórate at the U-M. He is a member of the Midwest College Placement Association, Association for School, College and University Staf f ing, Michigan College and University Placement Association and Michigan Association of School Administrators. Nisbet is a past-president of Ypsilanti's Rotary Club, a member of the Presbyterian Church of Ypsilanti and Boy Scouts of America. He was fund drive chairman for the Ypsilanti United Fund Drive in 1968. Lutz has been an insurance representative since 1961. He has served on the State Special Education Advisory Commission since September, 1972, and is currently president of the Ann Arbor Eastern Kiwanis Club. As a child Lutz attended Rackham School in Ypsilanti and the Michigan School for, the Blind, Lansing. He received a bachelor of arts degree from the U-M in 1961. Lutz received the Ann Arbor Jaycees' Distinguished Service Award in 1964. He I also has been a member of the Jaycees I since 1964. He has been a member of Ann Arbor Eastern Kiwanis since 1961. Lutz also ia a member of the Ann _ bor Taxicab Board, the Y's Men's Club and the National Association of Life un-. derwriters. He is a member of Bethlehem United Church of Christ and was a member of the Ann Arbor Youth Commission. Lutz has been active in the Republican party at county and state levels since 1956. Mrs. Warshaw has lived in Washtenaw County for 20 years. She was trained as a speech therapist at the University of Wisconsin and taught at Ann J. Kellogg School in Battle Creek. After raising a family of four, Mrs. Warshaw earned her master's degree in special education at the U-M in 1972. She has directed the Washtenaw Association for Children with Social and Learning Difficulties for three years. She has been I a board member of the Washtenaw 1 ciation for Retarded Citizens. J Schnebelt has owned and operated re-H tail businesses in Ypsilanti, Saline and ■ Dexter for a total of 23 years. He is 1 sociated with Waggoner Real Estáte in I Dexter and is vice president of the 1 er Continental Corporation, a real estáte I investment corporation. He is a member I of the advisory board of the Dexter I branch of the Ann Arbor Bank. Schnebelt has served 13 years on the I Dexter Board of Education and has held I all pf the board offices. The former Navy I pilot who served during World War II is I a member of the Dexter American I gion post. He also is a member of the I Ann Arbor Moose and the Dexter Vintage I Car club. The 10 electors will cast their votes at I a meeting scheduled at 7:30 p.m. at the I WISD Building, 1819 S. Wagner Rd. There are five members on the Board I of Education. Others with uncompleted I terms are Charles Good, 2006 Medford; Elvira Vogel of Manchester; and Robert DeVee of Milan. Robert G. Foster of Chelsea is not seeking re-election. When intermedíate school districts were established by the Legislature in 1963, two methods of electing intermedíate school board members were written into the law: by constituent school districts as in Washtenaw or by popular ! referendum. Only five intermedíate districts, primarily in the Upper Península and upper part of the Lower Península use the popular referendum, according to WISD officials. To change the method of election in Washtenaw, or any other intermedíate district, to a popular referendum re quires a petition from the majority of A the school districts in the intermedíate I district representing a majority of the I school population.