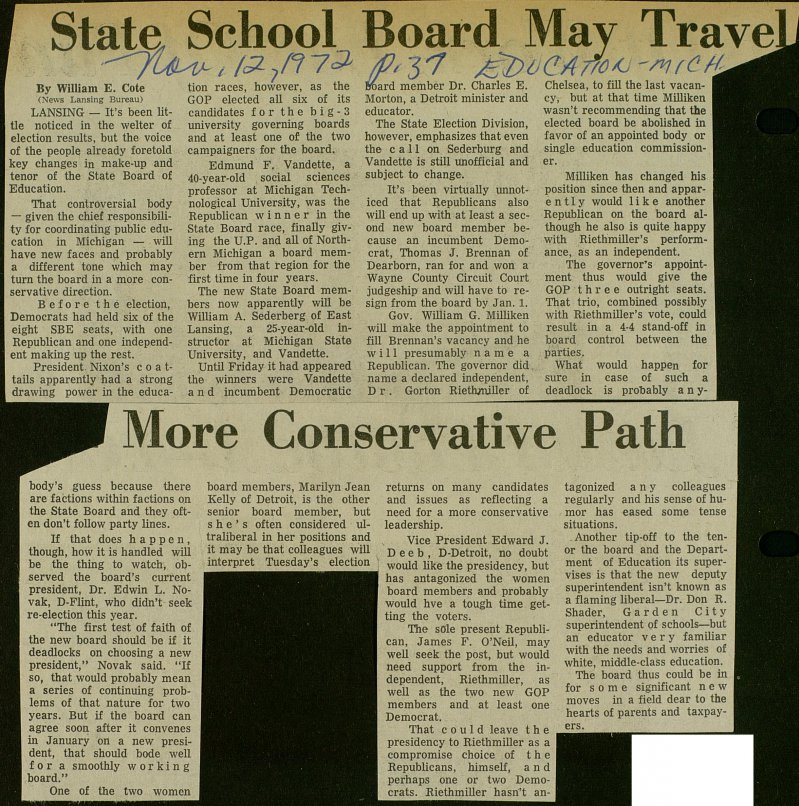 LANSING - It's been little noticed in the welter of election results, but the voice of the people already foretold key changes in make-up and tenor of the State Board of Education. That controversial body - given the chief responsibility for coordinating public education in Michigan - will have new faces and probably a different tone which may turn the board in a more conservative direction. Before thé election, Democrats had held six of the eight SBE seats, with one Republican and one independent making up the rest. President Nixon's coattails apparently had a strong drawing power in the tion races, however, as the GOP elected all six of its candidates for the big-3 university governing boards and at least one of the two campaigners for the board. Edmund F. Vandette, a 40-year-old social sciences professor at Michigan Technological University, was the Republican winner in the State Board race, finally giving the U.P. and all of Northern Michigan a board member from that región for the first time in four years. The new State Board members now apparently will be William A. Sederberg of East Lansing, a 25-year-old instructor at Michigan State University, and Vandette. Until Friday it had appeared the winners were Vandette and incumbent Democratie Board membér Dr. Charles E. Morton, a Detroit minister and educator. The State Election División, however, emphasizes that even the cali on Sederburg and Vandette is still unofficial and subject to change. It's been virtually unnoticed that Republicans also will end up with at least a second new board member because an incumbent Democrat, Thomas J. Brennan of Dearborn, ran for and won a Wayne County Circuit Court judgeship and will have to resign from the board by Jan. 1. Gov. William G. Milliken will make the appointment to fill Brennan's vacancy and he will presumably name a Republican. The governor did name a declared independent, D r . Gorton Riethniller of Chelsea, to fill the last vacancy, but at that time Milliken wasn't recommending that the elected board be abolished in favor of an appointed body or single education commissioner. Milliken has changed his position since then and appare n 1 1 y would 1 i k e another Republican on the board although he also is quite happy with Riethmiller's performance, as an independent. The governor's appointment thus would give the GOP three outright seats. That trio, combined possibly with Riethmiller's vote, could result in a 4-4 stand-off in board control between the parties. What would happen for sure in case of such a deadlock is protiably a n body's guess because there are factions within factions on the State Board and they often don't follow party lines. If that does happen, though, how it is handled will be the thing to watch, observed the board's current president, Dr. Edwin L. Novak, D-Flint, who didn't seek re-election this year. "The first test of faith of the new board should be if it deadlocks on choosing a new president," Novak said. "If so, that would probably mean a series of continuing problems of that nature for two years. But if the board can agree soon after it convenes in January on a new president, that should bode well fora smoothly w o r k i n g board." One of the two women board members, Marilyn Jean Kelly of Detroit, is the other senior board member, but s h e ' s often considered ultraliberal in her positions and it may be that colleagues will interpret Tuesday's election returns on many candidates and issues as reflecting a need for a more conservative leadership. Vice President Edward J. D e e b , D-Detroit, no doubt would like the presidency, but has antagonized the vromen board members and probably would hve a tough time getting the voters. The söle present Republican, James F. O'Neil, may well seek the post, but would need support from the independent, Riethmiller, as well as the two new GOP members and at least one Democrat. That c o u 1 d leave the presidency to Riethmiller as a compromise choice of the Republicans, himself, and perhaps one or two Democrats. Riethmiller hasn't tagonized a n y colleagues regularly and his sense of humor has eased some tense situations. Another tip-off to the tenor the board and the Department of Education its supervises is that the new deputy superintendent isn't known as a flaming liberal- Dr. Don R. Shader, Garden City superintendent of schools- but an educator v e r y familiar with the needs and worries of white, middle-class education. The board thus could be in for some significant new moves in a field dear to the hearts of parents and taxpayers.