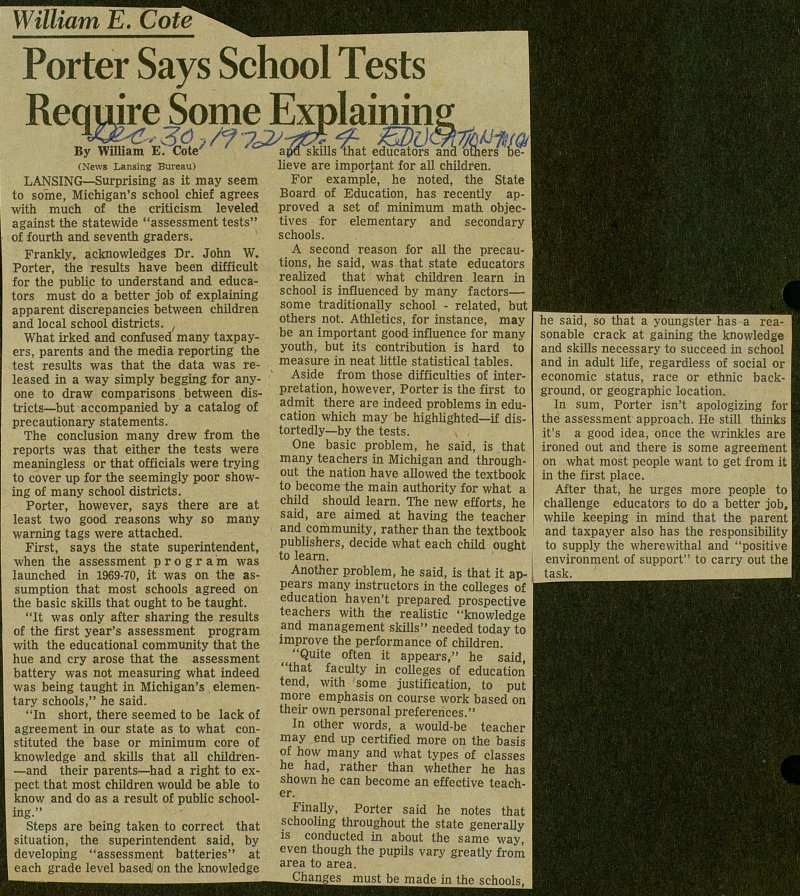 William E. Cote LANSING - Surprising as it may seem to some, Michigan's school chief agrees with much of the criücism leveled against the statewide "assessment tests" of fourth and seventh graders. Frankly, acknowledges Dr. John W. Porter, the results have been difficult for the public to understand and educators must do a better job of explaining apparent discrepancies between children and local school districts. , What irked and confused many taxpayers, parents and the media reporting the test results was that the data was released in a way simply begging for anyone to draw comparisons between districts- but accompanied by a catalog of precautionary statements. The conclusión many drew from the reports was that either the tests were meaningless or that officials were trying to cover up for the seemingly poor showing of many school districts. Porter, however, says there are at least two good reasons why so many warning tags were attached. First, says the state superintendent, when the assessment program was launched in 1969-70, it was on the assumption that most schools agreed on the basic skills that ought to be taught. "It was only after sharing the results of the first year's assessment program with the educational community that the hue and cry arose that the assessment battery was not measuring what indeed was being taught in Michigan's elementary schools," he said. "In short, there seemed to be lack of agreement in our state as to what constituted the base or minimum core of knowledge and skills that all children- and their parents- had a right to expect that most children would be able to know and do as a result of public schooling." Steps are being taken to correct that situation, the superintendent said, by developing "assessment batteries" at each grade level based on the knowledge ajíd skills that educators and bfhers believe are important for all children. For example, he noted, the State Board of Education, has recently approved a set of minimum math objectives for elementary and secondary schools. A second reason for all the precautions, he said, was that state educators realized that what children learn in school is influenced by many factors - some traditionally school - related, but others not. Athletics, for instance, may be an important good influence for many youth, but its contribution is hard to measure in neat little statistical tables. 1 Aside from those difficulties of interpretation, however, Porter is the first to admit there are indeed problems in education which may be highlighted- if distortedly- by the tests. One basic problem, he said, is that many teachers in Michigan and throughout the nation have allowed the textbook to become the main authority for what a child should learn. The new efforts, he said, are aimed at having the teacher and community, rather than the textbook publishers, decide what each child ought to learn. Another problem, he said, is that it appears many instructors in the colleges of education haven't prepared prospective teachers with the realistic "knowledge and management skills" needed today to improve the performance of children. "Quite often it appears," he said, "that faculty in colleges of education tend, with 'some justificaron, to put more emphasis on course work based on their own personal preferences." In other words, a would-be teacher may end up certified more on the basis of how many and what types of classes he had, rather than whether he has shown he can become an effective teacher. Finally, Porter said he notes that schooling throughout the state generally is conducted in about the same way, even though the pupils vary greatly from area to area. __Changes must be made in the schools. he said, so that a youngster has a reasonable crack at gaining the knowledge and skills necessary to succeed in school and in adult life, regardless of social or economie status, race or ethnic background, or geographic location. In sum, Porter isn't apologizing for the assessment approach. He still thinks it's a good idea, once the wrinkles are ironed out and there is some agreeínent on what most people want to get from it in the first place. After that, he urges more people to challenge educators to do a better job, while keeping in mind that the parent and taxpayer also has the responsibility to supply the wherewithal and "positive environment of support" to carry out the I task.