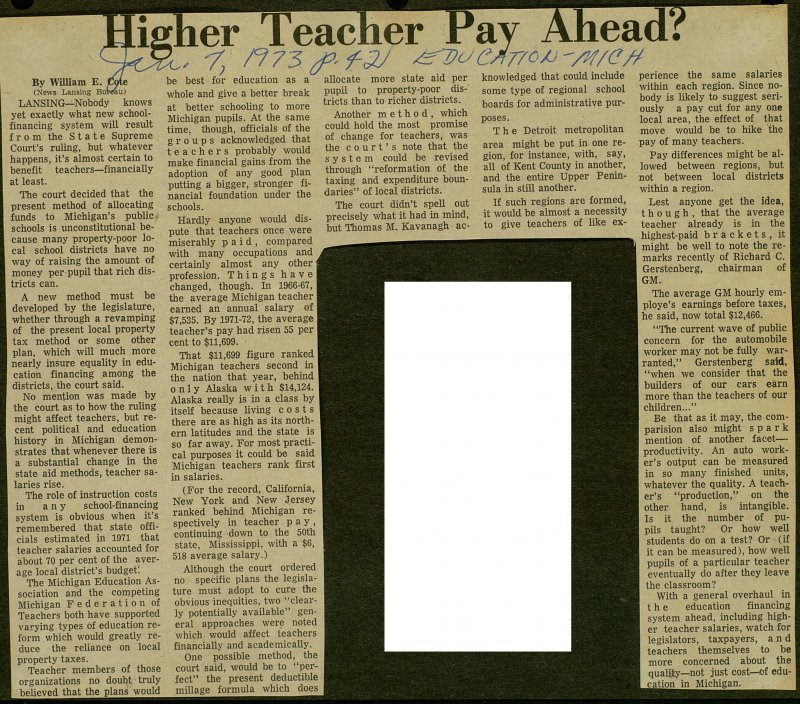 LANSING- Nobody knows yet exactly what new schoolfinancing system will result from the State Supreme Court's ruling, but whatever happens, it's almost certain to benefit teachers- financially at least. The court decided that the present method of allocating funds to Michigan's public schools is unconstitutional because many property-poor local school districts have no way of raising the amount of money per pupil that rich districts can. A new method must be developed by the legislature, whether through a revamping of the present local property tax method or some other plan, which will much more nearly insure equality in education financing among the districts, the court said. No mention was made by the court as to how the ruling might affect teachers, but recent political and education history in Michigan demonstrates that whenever there is a substantial change in the state aid methods, teacher salaries rise. The role of instruction costs in a n y school-financing system is obvious when it's remembered that state officials estimated in 1971 that teacher salaries accounted for about 70 per cent of the average local district's budget'. The Michigan Education Association and the competing Michigan Federation of Teachers both have supported varying types of education reform which would greatly reI duce the reliance on local nroperty taxes. Teacher members of those organizations no doubt truly believed that the plans would be best for education as a whole and give a better break at better schooling to more Michigan pupils. At the same time, though, officials of the g r o u p s acknowledged that teachers probably would make financial gains from the adoption of any good plan putting a bigger, stronger financial foundation under the schools. Hardly anyone would dispute that teachers once were miserably p a i d , compared with many occupations and certainly almost any otherj profession. Things have changed, though. ín 1966-67, the average Michigan teacher earned an annual salary of $7,535. By 1971-72, the average teacher's pay had risen 55 per cent to $11,699. That $11,699 figure ranked Michigan teachers second in the nation that year, behind o ni y Alaska with $14,124. Alaska really is in a class by itself because living c o s t s there are as high as its northern latitudes and the state is so far away. For most practical purposes it could be said Michigan teachers rank first in salaries. (For the record, California, New York and New Jersey ranked behind Michigan respectively in teacher pay, continuing down to the 50th state, Mississippi, with a $6, 518 average salary.) Although the court ordered no specific plans the legislature must adopt to cure the obvious inequities, two "clearly potentially available" general approaches were noted which would affect teachers financially and academically. One possible method, the court said, would be to "perfect" the present deductible millage formula which does allocate more state aid per pupil to property-poor districts than to richer districts. Another method, which could hold the most promise of change for teachers, was the c o u r t ' s note that the s y s t e m could be revised through "reformation of the taxing and expenditure boundaries" of local districts. The court didn't spell out precisely what it had in mind, but Thomas M. Kavanagh knowledged that could include some type of regional school boards for administrative purposes. The Detroit metropolitan área might be put in one region, for instance, with, say, all of Kent County in another, and the entire Upper Peninsula in still another. If such regions are formed, it would be almost a necessity to give teachers of like perience the same salaries within each región. Since nobody is likely to suggest seriously a pay cut for any one local área, the effect of that move would be to hike the pay of many teachers. Pay differences might be allowed between regions, but not between local districts within a región. Lest anyone get the idea, t h o u g h , that the average teacher already is in the highest-paid brackets, it might be well to note the remarks recently of Richard C. Gerstenberg, chairman of GM. The average GM hourly employe's earnings before taxes, he said, now total $12,466. "The current wave of public concern for the automobile worker may not be fully warranted," Gerstenberg said, I "when we consider that the builders of our cars earn more than the teachers of our children..." Be that as it may, the comparision also might s p a r k mention of another facet - productivity. An auto worker's output can be measured in so many finished units, whatever the quality. A teacher's "production," on the other hand, is intangible. Is it the number of pupils taught? Or how well students do on a test? Or (if it can be measured), how well pupils of a particular teacher eventually do after they leave the classroom? With a general overhaul in the education financing system ahead, including higher teacher salaries, watch for legislators, taxpayers, and teachers themselves to be more concerned about the qualijty- not just cost- of education in Michigan.