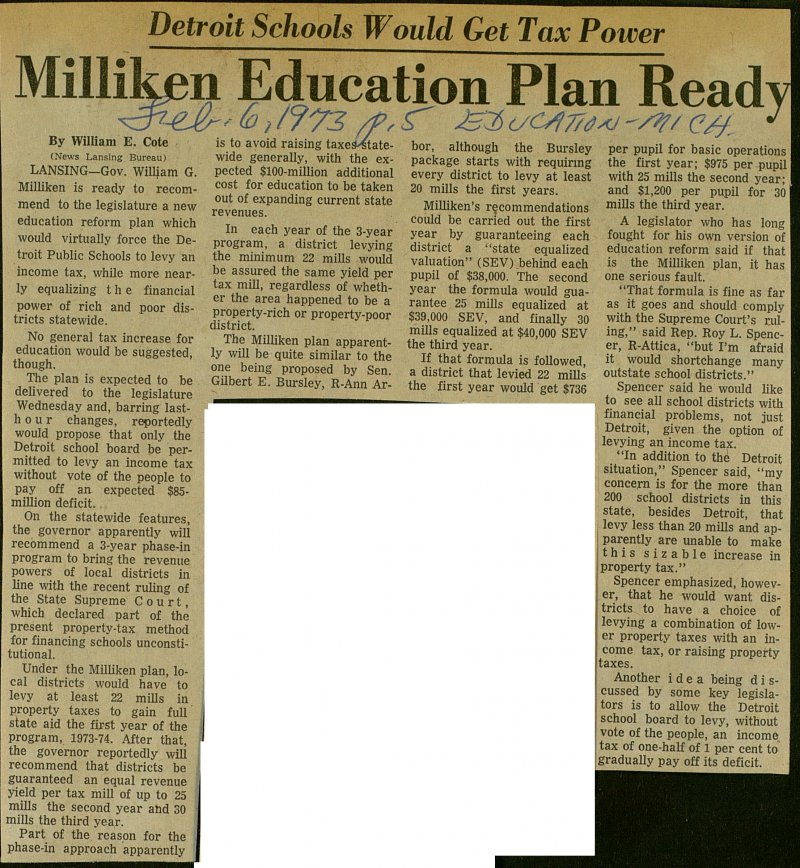 LANSING- Gov. William G. Milliken is ready to recommend to the legislature a new education reform plan which would virtually force the Detroit Public Schools to levy an income tax, while more nearly equalizing the financial power of rich and poor districts statewide. No general tax increase for education would be suggested, though. The plan is expected to be delivered to the legislature Wednesday and, barring lasth o u r changes, reportedly would propose that only the Detroit school board be permitted to levy an income tax without vote of the people to pay off an. expected $85million deficit. On the statewide features, the governor apparently will recommend a 3-year phase-in program to bring the revenue powers of local districts in line with the recent ruling of the State Supreme C o u r t , which declared part of the present property-tax method for financing schools unconstitutional. Under the Milliken plan, local districts would have to levy at least 22 milis in property taxes to gain full state aid the first year of the program, 1973-74. After that, the governor reportedly will recommend that districts be guaranteed an equal revenue yield per tax mili of up to 25 milis the second year and 30 milis the third year. Part of the reaspn for the phase-in approach apparently is to avoid raising taxeá4tatewide generally, with the expected $100-million additional cost for education to be taken out of expanding current state revenues. In each year of the 3-year program, a district levying the minimum 22 milis would be assured the same yield per tax mili, regardless of whether the área happened to be a property-rich or property-poor district. The Milliken plan apparently will be quite similar to the one being proposed by Sen. Gübert E. Bursley, R-Ann bor, although the Bursley package starts with requinng every district to levy at least 20 milis the first years. Milüken's re.commendations could be carried out the first year by guaranteeing each district a "state equalized valuation" (SEV) behind each pupil of $38,000. The second year the formula would guarantee 25 milis equalized at $39,000 SEV, and finally 30 milis equalized at $40,000 SEV the third year. If that formula is followed, a district that levied 22 milis the first year would get $736 per pupil for basic operations the first year; $975 per pupil with 25 milis the second year; and $1,200 per pupil for 30 milis the third year. A legislator who has long fought for his own version of education reform said if that is the Milliken plan, it has one serious fault. "That formula is fine as far as it goes and should comply with the Supreme Court's ruling," said Rep. Roy L. Spencer, R-Attica, "but I'm afraid it would shortchange many outstate school districts." Spencer said he would like to see all school districts with financial problems, not just Detroit, given the option of levying an income tax. "In addition to the Detroit situation," Spencer said, "my concern is for the more than 200 school districts in this state, besides Detroit, that levy less than 20 milis and apparently are unable to make this sizable increase in property tax." Spencer emphasized, however, that he would want districts to have a choice of levying a combination of lower property taxes with an income tax, or raising property taxes. Another idea being d i scussed by some key legislators is to allow the Detroit school board to levy, without vote of the people, an income tax of one-half of 1 per cent to ïradually pay off its deficit.