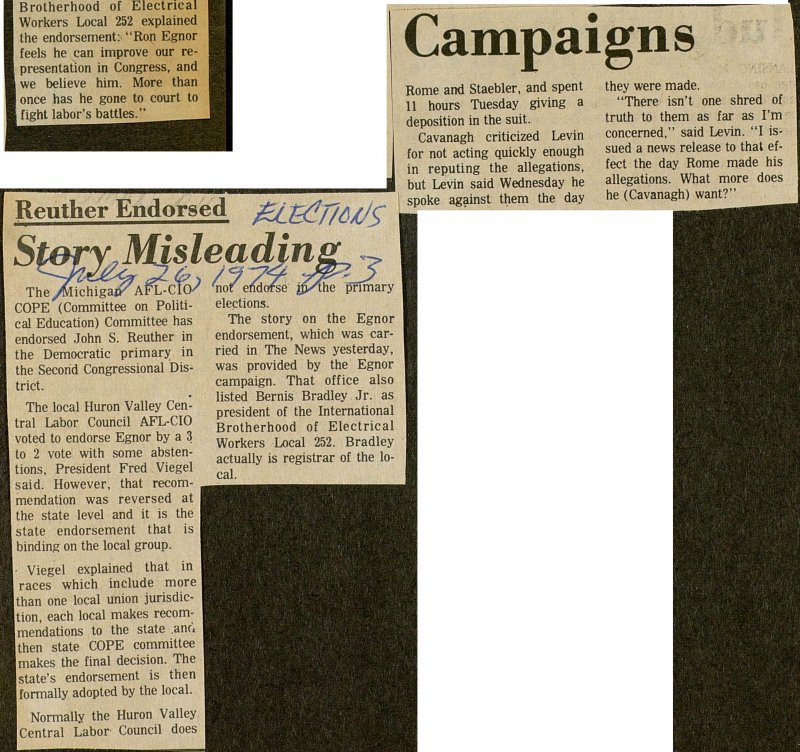 TheichigaiK AFL-CIO' COPE (Committee on Political Education) Committee has endorsed John S. Reuther in the Democratie primary in the Secorid Congressional District. The local Hurón Valley Central Labor Council AFL-CIO voted to endorse Egnor by a 3 to 2 vote with some abstentions, President Fred Viegel said. However, that recommendation was reversed at the state level and it is the state endorsement that is binding on the local group. Viegel explained that in races which include more than one local unión jurisdiction, each local makes recommendations to the state .anc. then state COPE committee makes the final decisión. The state's endorsement is then formally adopted by the local. Normally the Huron Valley Central Labor Council does 'noiemorse jípíhe pnmary elections. The story on the Egnor endorsement, which was carried in The News yesterday, was provided by the Egnor campaign. That office also Usted Bernis Bradley Jr. as president of the International Brotherhood of Electrical Workers Local 252. Bradley actually is registrar of the local. Rome and Staebler, and spent 11 hours Tuesday giving a deposition in the suit. Cavanagh criticized Levin for not acting quickly enough in reputing the allegations, but Levin said Wednesday he spoke against them the day they were made. "There isn't one shred of truth to them as far as I'm concerned," said Levin. "I issued a news release to that effect the day Rome made his allegations. What more does he (Cavanagh) want?"