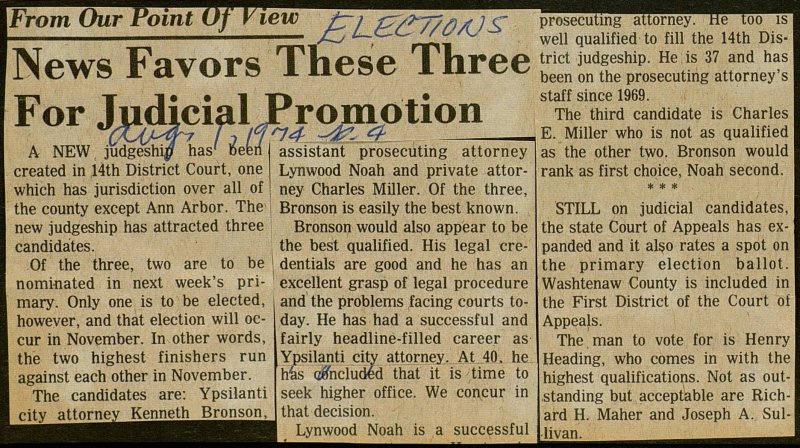 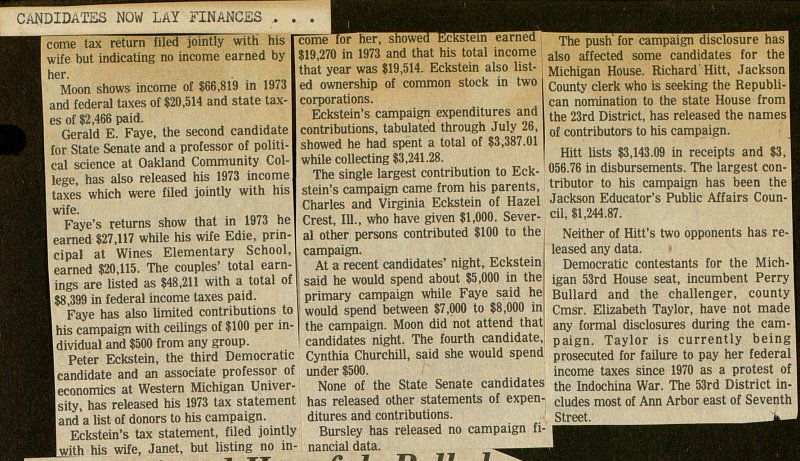 A NEW, judgeshij has' ttefeii created in I4th District Court, one which has jurisdiction over all of the county except Ann Arbor. The new judgeship has attracted three candidátes. Of the three, two are to be nomi-nated in next week's primary. Only one is to be elected, howeyer, and that election will occur in November. In other words, the two highest finishers run against each other in November. The candidates are: Ypsilanti ritv attornev Kenneth Bronson, assistant prosecuting attorney Lynwood Noah and private attorney Charles Miller. Of the three, Bronson is easily the best known. Bronson would also appear to be the best qualified. His legal credentials are good and he has an excellent grasp of legal procedure and the problems facing courts today. He has had a successful and fairly headline-filled career as Ypsilanti city áttorney. At 40, he h&s oêfacluded that it is time to seek higher office. We concur in that decisión. Lynwood Noah is a successful prosecuting attorney. He too is well qualified to fill the 14th District judgeship. He is 37 and has been on the prosecuting attorney 's staf f since 1969. The third candidate is Charles E. Miller who is not as qualified as the other two. Bronson would rank as first choice, Noah second. STILL on judicial candidates, the state Court of Appeals has expanded and it alo rates a spot on the primary election ballot. Washtenaw County is included in the First District of the Court of Appeals. The, man to vote for is Henry Heading, who comes in with the highest qualifications. Not as outstanding but acceptable are Richard H. Maher and Joseph A. Sullivan. ■'"■■ ■'■ -'- " CANDIDATOS NOW LAY FINANCES .. . . come tax return filed jomtly with his wife but indicating no income earned by her. Moon shows income of $66,819 in 1973 and federal taxes of $20,514 and state taxes of $2,466 paid. Gerald E. Faye, the second candidate for State Senate and a professor of political science at Oakland Community College, has also released his 1973 income taxes which were filed jointly with his wife. Faye's returns show that in 197.5 ne earned $27,117 wMle his wife Edie, principal at Wines Elementary School, earned $20,115. The couples' total earnings are listed as $48,211 with a total of $8,399 in federal income taxes paid. Faye has also limited contributions to his campaign with ceilings of $100 per individual and $500 from any group. Peter Eckstein, the third Democratie candidate and an associate professor of economics at Western Michigan University, has released his 1973 tax statement I and a hst of donors to his campaign. Eckstein's tax statement, filed jointly Iwith his wife. Janet, but listing no come for lier, showed Eckstem earnea $19,270 in 1973 and that his total income that year was $19,514. Eckstein also Usted ownership of common stock in two corporations. Eckstein's campaign expenditures and contributions, tabulate'd through July 26, showed he had spent a total of $3,387.01 while coUecting $3,241.28. The single largest contribution to Eckstein's campaign carne from his parents, Charles and Virginia Eckstein of Hazel Crest, 111., who have given $1,000. Several other persons contributed $100 to the campaign. At a recent candidates night, bcksteinj said he would spend about $5,000 in the; primary campaign while Faye said he' would spend between $7,000 to $8,000 irii the campaign. Moon did not attend thatj candidates night. The fourth candidate, Cynthia Churchill, said she would spend under $500. None of the State Senate candidates has released other statements of expenditures and contributions. Bursley has released no campaign finanpial data. - The push for campaign disclosure has I liso affected some candidates for the I Michigan House. Richard' Hitt, Jacksonl County clerk who is seeking the 1 can nomination to the state House from I the 23rd District, has released the ñames I of contributors to his campaign. I Hitt lists $3,143.09 in receipts and $3, 056.76 in disbursements. The largest contributor to his campaign has been the Jackson Educator's Public Affairs Council, $1,244.87. Neither of Hitt's two opponents has released any data. t Democratie contestants for the Michigan 53rd House seat, incumbent Perry Bullard and the challenger, county Cmsr. Elizabeth Taylor, have not made any formal disclosures during the campaign. Taylor is currently being prosecuted for failure to pay her federal income taxes since 1970 as a protest of the Indochina War. The 53rd District includes most of Ann Arbor east of Seventh Street. Jt-