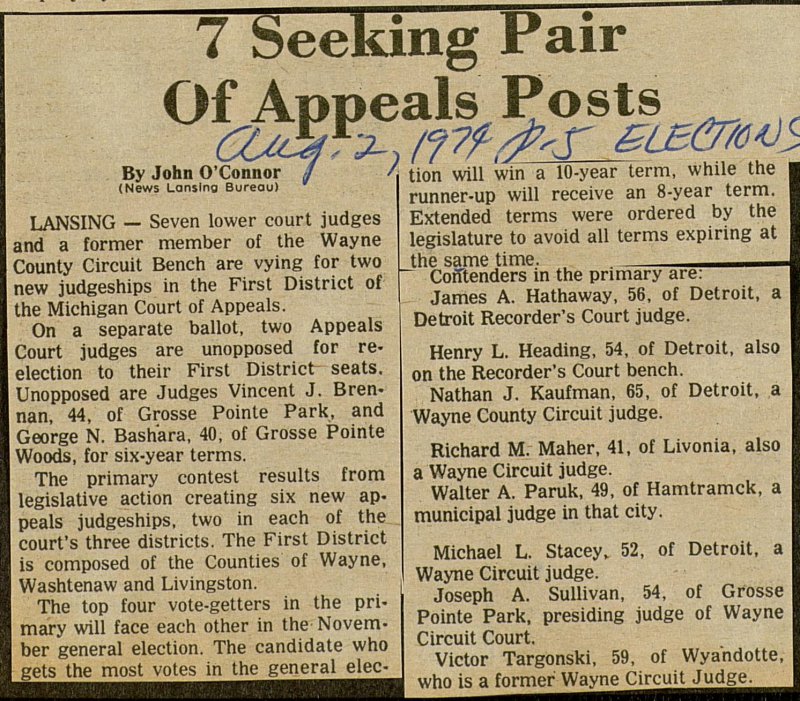 LANSING - Seven lower court judges and a former member of the Wayne County Circuit Bench are vying for two new judgeships in the First District of the Michigan Court of Appeals. On a separate ballot, two Appeals Court judges are unopposed for reelection to their First District seats. Unopposed are Judges Vincent J. Brennan, 44, of Grosse Pointe Park, and George N. Bashara, 40, of Grosse Pointe Woods, for six-year terms. The primary contest results from legislative action creating six new appeals judgeships, two in each of the court's three districts. The First District is composed of the Counties of Wayne, Washtenaw and Livingston. The top four vote-getters in the primary will face each other in the November general election. The candidate who efits the most votes in the general tion will win a 10-year term, while the runner-up will receive an 8-year term. Extended terms were ordered by the legislature to avoid all terms expiring at the same time. - "" Coñtenders in the primary are: James A. Hathaway, 56, of Detroit, a Detroit Recorder's Court judge. Henry L. Heading, 54, of Detroit, also on the Recorder's Court bench. Nathan J. Kaufman, 65, of Detroit, a Wayne County Circuit judge. Richard M. Maher, 41, of Livonia, also a Wayne Circuit judge. Walter A. Paruk, 49, of Hamtramck, a municipal judge in that city. Michael L. Stacey, 52, of Detroit, a Wayne Circuit judge. Joseph A. Sullivan, 54, of Grosse Pointe Park, presiding judge of Wayne Circuit Court. Victor Targonski, 59, of Wyandotte, who is a former Wayne Circuit Judge. 3 SEEK NEW . . . Township - Miller believes it should be located in an existing spare courtroom in the County Service Center for reasons of reducing expenses. Miller, his wife and two children reside across the street from the Service Center at 4158 Washtenaw Ave. in Pittsfield Township. His non-working hours are sometimes spent gardening. Two incumbent 14th District Court judges are also up for election in November, but are running unopposed. Judge Robert V. Fink, 61, was appointed to his judgeship in January of 1973 to fill the unexpired term of Judge Patrick J. Conlin, who had been elected Circuit Court judge. Fink had formerly been a ! private attorney in Ypsilanti and an 1 successful candidate for both the District and Circuit Court benches. Judge Thomas F. Shea, 46, went from an assistant in the Prosecuting j ney's Office to his position as a judge a short time after Fink. He was appointed to fill the vacancy created when Judge Ëdward D. Deake was elected to Circuit Court. Although Deake's term on the District Court bench was not to expire until the end of 1976, Shea - his successor - is required by law to stand for election in order to keep his job. Thus, Shea is seeking another two years on the bench while Fink is running for a full six-year term . I