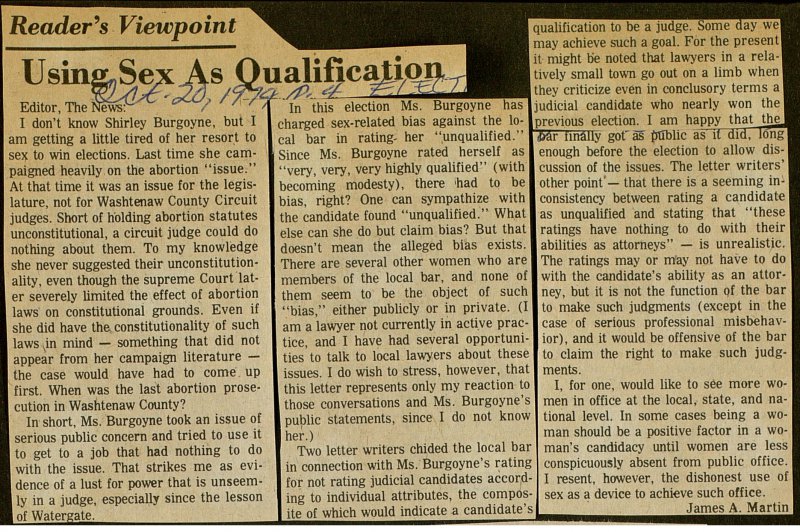 I don't know Shirley Burgoyne, but I im getting a little tired of her resort to sex to win elections. Last time she campaigned heavily on the abortion "issue." At that time it was an issue for the legislature, not for Washtenaw County Circuit judges. Short of holding abortion statutes unconstitutional, a circuit judge could do nothing about them. To my knowledge she never suggested their unconstitutionality, even though the supreme Court later severely limited the effect of abortion laws on constitutional grounds. Even if she did have the. constitutionality of such laws jn mind - something that did not appear from her campaign literature - the case would have had to come up first. When was the last abortion prosecution in Washtenaw County? In short, Ms. Burgoyne took an issue of serious public concern and tried to use it to get to a job that had nothing to do with the issue. That strikes me as evidence of a lust for power that is unseemI ly in a judge, especially since the lesson I of Watergate. In this election Ms. Burgoyne has charged sex-related bias against the local bar in her "unqualified." Since Ms. Burgoyne rated herself as "very, very, very highly qualified" (with becoming modesty), there 'had tp be bias, right? One can sympathize with the candidate found "unqualified." What else can she do but claim bias? But that doesn't mean the alleged bias exists. There are several other women who are members of the local bar, and none of them seem to be the object of such "bias," either publicly or in private. (I am a lawyer not currently in active practice, and I have had several opportunities to talk to local lawyers about these issues. I do wish to stress, however, that this letter represente only my reaction to those conversations and Ms. Burgoyne' s public statements, since I do not know her.) Two letter writers chided the local bar in connection with Ms. Burgoyne's rating for not rating judicial candidates accord ing to individual attributes, the compos ite of which would indicate a candidate' qualification to be a judge. Some day weB may achieve such a goal. For the presentB it might be noted that lawyers in a rela-1 tively small town go out on a limb when I tiey criticize even in conclusory terms al udicial candidate who nearly won thel revious election. I am happy that thel sar ünaiiy got' as public ás it did, longl enough before the election to allow dis-l cussion of the issues. The letter writers' I other point'- that there is a seeming in: I consistency between rating a candidate I as unqualified and stating that "these I ratings have nothing to do with their abilities as attorneys" - is unrealistic. The ratings may or may not have to do with the candidate' s ability as an attorney, but it is not the function of the bar to make such judgments (except in the case of serious professional misbehavior), and it would be offensive of the bar to claim the right to make such judgments. I, for one, would like to sêe more women in office at the local, state, and national level. In some cases being a woman should be a positive factor in a woman's candidacy until women are less conspicuously absent f rom public office. I resent, however, the dishonest use of sex as a device to achieve such office. James A. Martin