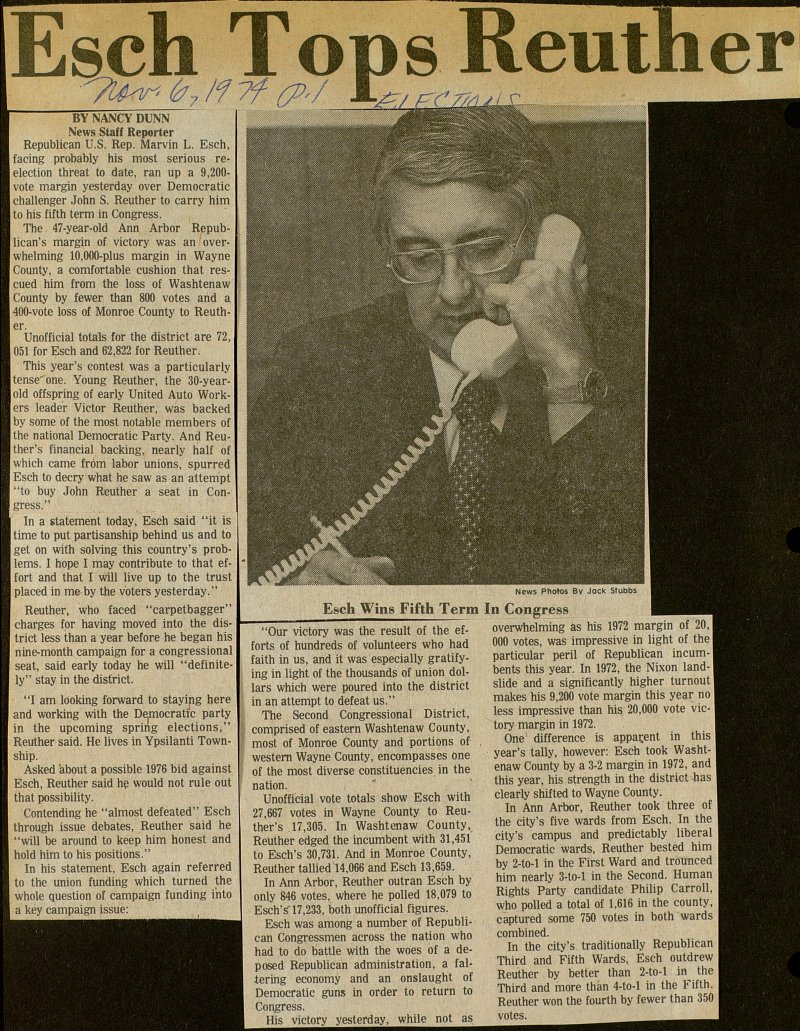 Republican U.S. Rep. Marvin L. Esch, facing probably his most serious reelection threat to date, ran up a 9,200vote margin yesterday over Democratie challenger John S. Reuther to carry him to his fifth term in Congress. The 47-year-old Ann Arbor Republican's margin of victory was an overwhelming 10,000-plus margin in Wayne County, a comfortable cushion that rescued him from the loss of Washtenaw County by fewer than 800 votes and a 400-vote loss of Monroe County to Reuther. Unofficial totals for the district are 72, 051 for Esch and 62,822 for Reuther. This year's eontest was a particularly tense' one. Young Reuther, the 30-yearold offspring of early United Auto Workers leader Victor Reuther, was backed by some of the most notable members of the national Democratie Party. And Reuther's financial backing, nearly half of which carne fróm labor unions, spurred Esch to decry what he saw as an attempt "to buy John Reuther a seat in Congress." In a statement today, Esch said "it is time to put partisanship behind us and to get on with solving this country's problems. I hope I may contribute to that effort and that I will live up to the trust placed in m&by the voters yesterday." Reuther, who faced "carpetbagger" charges for having moved into the district less than a year before he began his nine-month campaign for a congressional seat, said early today he will "definitely" stay in the district. "I am löoking forward to staying here and working with the Democratie party in the upcoming spring elections," Reuther said. He lives in Ypsilanti Township. Asked about a possible 1976 bid against Esch, Reuther said he would not rule out that possibility. Contending he "almost defeated" Esch through issue debates, Reuther said he "will be around to keep him honest and hold him to his positions." In his statement, Esch again referred to the union funding which turned the whole question of campaign funding i'nto a key campaign issue: "Our victory was the result of the efforts of hundreds of volunteers who had faith in us, and it was especially gratifying in light of the thousands of union dollars which were poured into the district in an attempt to defeat us." The Second Congressional District, comprised of eastern Washtenaw County, most of Monroe County and portions of , western Wayne County, encompasses one of the most diverse constituencies in the nation. Unofficial vote totals show Esch with 27,667 votes in Wayne County to Reuther's 17,305. In Washtenaw County, Reüther edged the incumbent with 31,451 to Esch's 30,731. And in Monroe County, Reuther tallied 14,066 and Esch 13,659. In Ann Arbor, Reuther outran Esch by only 846 votes, where he polled 18,079 to Esch's 17,233, both unofficial figures. Esch was among a number of Republican Congressmen across the nation who had to do battle with the woes of a deposed Republican administration, a faliering economy and an onslaught of Democratie guns in order to return to Congress. His victorv vesterday, while not as overwhelming as his 1972 margin of 20, 1 000 votes, was impressive in light of the I particular peril of Republican incum-l bents this year. In 1972, the Nixon 1 slide and a significantly higher turnoutl makes his 9,200 vote margin this year no less impressive than his 20,000 vote victory margin in 1972. One difference is appar,ent in this year's tally, however: Esch took 1 enaw County by a 3-2 margin in 1972, and this year, his strength in the district has clearly shifted to Wayne County. In Ann Arbor, Reuther took three of the city's five wards from Esch. In the city's campus and predictably liberal Democratie wards, Reuther bested him by 2-to-l in the First Ward and trounced him nearly 3-to-l in the Second. Human Rights Party candidate Philip Carroll, who polled a total of 1,616 in the county, captured some 750 votes in both wards combined. In the city's traditionally Republican Third and Fifth Wards, Esch outdrew Reuther by better than 2-to-l in the Third and more than 4-to-l in the Fifth. Reuther won the fourth by fewer than 350 votes.