8 Aspirants Are Out Of City Election Scene 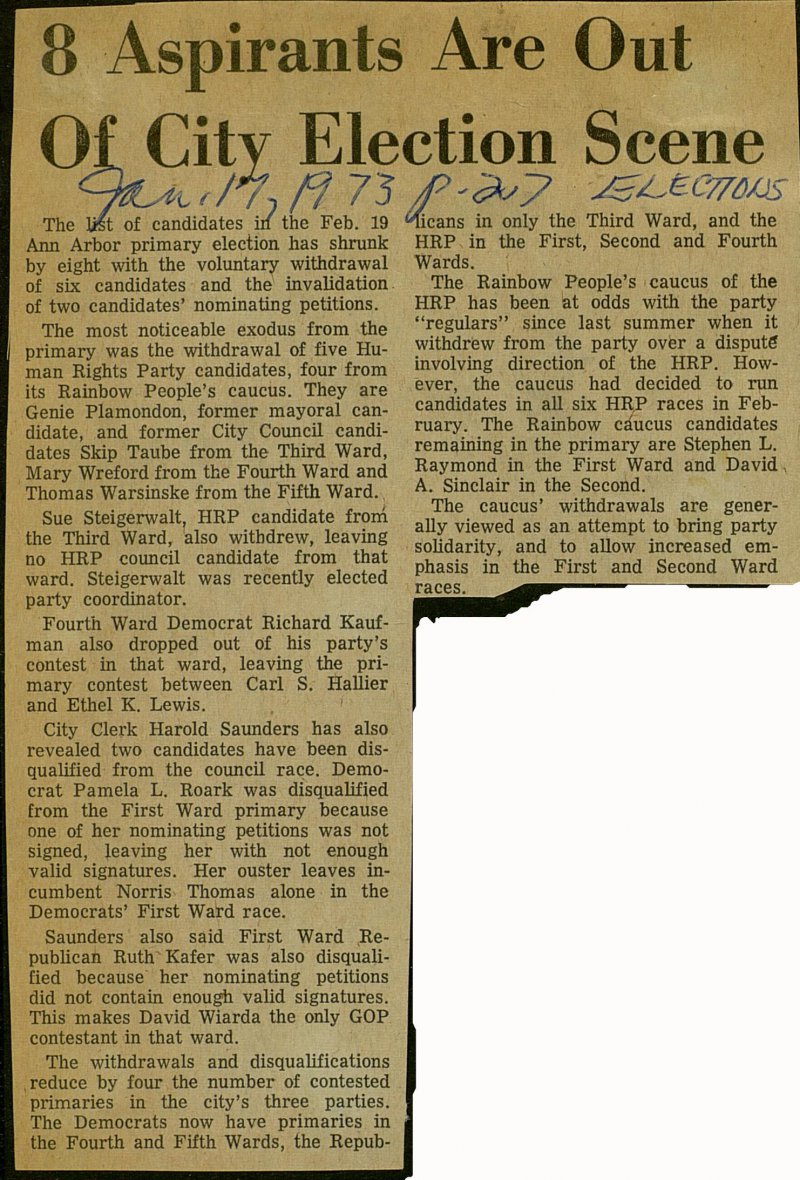 The Ust of candidates irfthe Feb. 19 Ana Arbor primary election has shrunk by eight with the voluntary withdrawal of six candidates and the invalidation of two candidates' nominating petitions. The most noticeable exodus from the primary was the withdrawal of five Human Rights Party candidates, four from its Rainbow People's caucus. They are Genie Plamondon, former mayoral candidate, and former City Council candidates Skip Taube from the Third Ward, Mary Wreford from the Fourth Ward and Thomas Warsinske from the Fifth Ward. Sue Steigerwalt, HRP candidate froní the Third Ward, also witbdrew, leaving no HRP council candidate from that ward. Steigerwalt was recently elected party coördinator. Fourth Ward Democrat Richard Kaufman also dropped out of his party's contest in that ward, leaving the primary contest between Cari S. Hallier and Ethel K. Lewis. City Clerk Harold Saunders has also revealed two candidates have been disqualified from the council race. Democrat Pamela L. Roark was disqualified from the First Ward primary because one of her nominating petitions was not signed, leaving her with not enough valid signatures. Her ouster leaves incumbent Norris Thomas alone in the Democrats' First Ward race. Saunders also said First Ward Republican Ruth Kafer was also disqualified because her nominating petitions did not contain enough valid signatures. This makes David Wiarda the only GOP contestant in that ward. I The withdrawals and disqualifications reduce by four the number of contested primaries in the city's three parties. I The Democrats now have primaries in the Fourth and Fifth Wards, the ícans in only the Third Ward, and the HRP in the First, Second and Fourth Wards. The Rainbow People's caucus of the HRP has been at odds with the party "regulars" since last sunimer when it withdrew from the party over a dispute involving direction of the HRP. Howêver, the caucus had decided to run candidates in all six HRP races in February. The Rainbow cáucus candidates remaining in the primary are Stephen L. Raymond in the First Ward and David , A. Sinclair in the Second. The caucus' withdrawals are generally viewed as an attempt to bring party solidarity, and to allow increased emphasis in the First and Second Ward races.