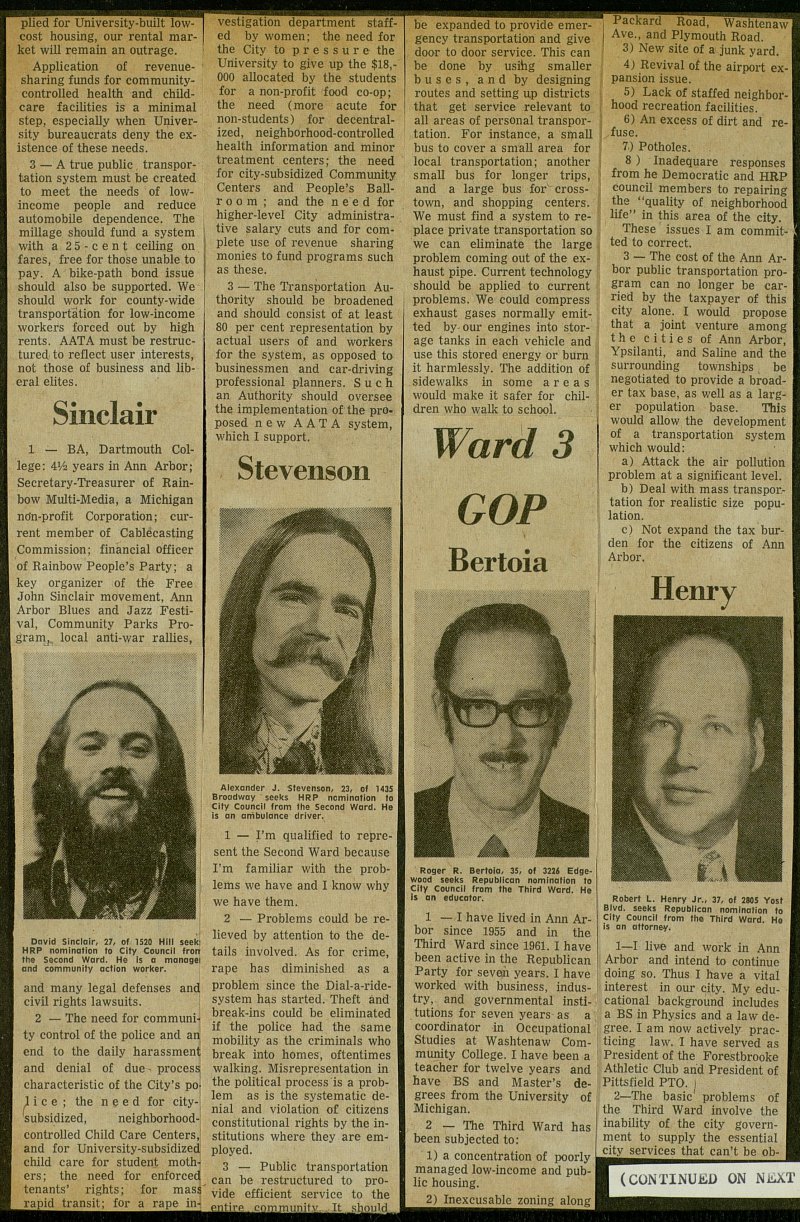 plied for University-built lowcost housing, our rental market will remain an outrage. Application of ! sharing funds for communitycontrolled health and childcare facilities is a minimal step, especially when University bureaucrats deny the existence of these needs. 3 - A true public . transportation system must be created to meet the needs of lowincome people and reduce automobile dependence. The millage should fund a system with a 2 5 - c e n t ceiling on fares, free for those unable to pay. A bike-path bond issue should also be supported. We should work for county-wide transportación for low-income workers forced out by high rents. AATA must be restructured to reflect user interests, not those of business and liberal elites. Sinclair 1 - BA, Dartmouth College: 4% years in Ann Arbor; Secretary-Treasurer of Rainbow Multi-Media, a Michigan nön-profit Corporation; current member of Cablecasting Commission; financial officer of Rainbow People's Party; a key organizer of tKe Free I John Sinclair movement, Ann I Arbor Blues and Jazz FestiI val, Community Parks ProI gram, local anti-war rallies, I and many legal defenses and I civil rights lawsuits. 2 - The need for communiI ty control of the pólice and an I end to the daily harassment I and denial of process characteristic of the City's po1 i c e ; the need for citysubsidized, neighborhoodcontrolled Child Care Centers, and for University-subsidized child care for student mothers; the need for enforced I tenants' rights; for masa' rapid transit; for a rape vestigation department staffed by women; the need for the City to pressure the University to give up the $18,000 allocated by the students for a non-profit food co-op; the need (more acute for non-students) for decentralized, neighborhood-controlled health information and minor treatment centers; the need for city-subsidized Community Centers and People's Ballroom; and the n e e d for higher-level City administraI tive salary cuts and for comí píete use of revenue sharing monies to fund programs such as these. 3 - The Transportation Authority should be broadened and should consist of at least 80 per cent representation by actual users of and workers for the system, as opposed to businessmen and car-driving professional planners. Such an Authority should oversee the implementation of the proposed n e w A A T A system, which I support. Stevenson 1 - I'm qualified to represent the Second Ward because I'm familiar with the problems we have and I know why we have them. 2 - Problems could be relieved by attention to the details involved. As for crime, rape has diminished as a problem since the Dial-a-ridesystem has started. Theft ánd break-ins could be eliminated if the pólice had the same mobility as the crimináis who break into homes, oftentimes walking. Misrepresentation in the political process is a problem as is the systematic denial and violation of citizens constitutional rights by the institutions where they are employed. 3 - Public transportation . can be restructured to provide efficiënt service to the pntirfi communitv It shoul.d be expanded to provide emergency transportation and give door to door service. This can be done by usihg smaller buses, and by designing routes and setting up districts that get service relevant to all áreas of personal transportation. For instance, a small bus to cover a small área for local transportation; another small bus for longer trips, and a large bus for'crosstown, and shopping centers. We must find a system to replace private transportation so we can eliminate the large problem coming out of the exhaust pipe. Current technology should be applied to current problems. We could compress exhaust gases normally emitted our engines into storage tanks in each vehicle and use this stored energy or burn it harmlessly. The addition of sidewalks in some a r e a s would make it safer for children who walk to school. Ward 3 GOP Bertoia 1 - I have lived in Ann Arbor since 1955 and in the Third Ward since 1961. I have been active in the Republican Party for seveji years. I have ] worked with business, industry, and governmental institutions for seven years as a coördinator in Occupational Studies at Washtenaw Commtuiity College. I have been a teacher for twelve years and have BS and Master's degrees from the University of Michigan. 2 - The Third Ward has been subjected to: 1) a concentration of poorly L managed low-income and 1 lic housing. 2) Inexcusable zoning along Packard Road, Washtenaw Ave., and Plymouth Road. 3) New site of a junk yard. 4) Revival of the airport expansión issue. 5) Lack of staffed [ hood recreation facilities. 6) An excess of dirt and refuse. 7.) Potholes. 8 ) Inadequare responses from he Democratie and HRP council members to repairing the "quality of neighborhood life" in this area of the city. These issues I am committed to correct. 3 - The cost of the Ann Arbor public transportation program can no longer be carried by the taxpayer of this city alone. I would propose that a joint venture among the cities of Ann Arbor, Ypsilanti, and Saline and the surrounding townships be negotiated to provide a broader tax base, as well as a larger population base. This would allow the development of a transportation system which would: a) Attack the air pollution problem at a significant level. b) Deal with mass transportation for realistic size population. c) Not expand the tax burden for the citizens of Ann Arbor. Henry 1- I live and work in Ann Arbor and intend to continue doing so. Thus I have a vital interest in our city. My educational background includes a BS in Physics and a law degree. I am now actively practieing law. I have served as President of the Forestbrooke Athletic Club and President of Pittsfield PTO. I 2- The basic problems of the Third Ward involve the inability of the city government to supply the essential city services that can't be