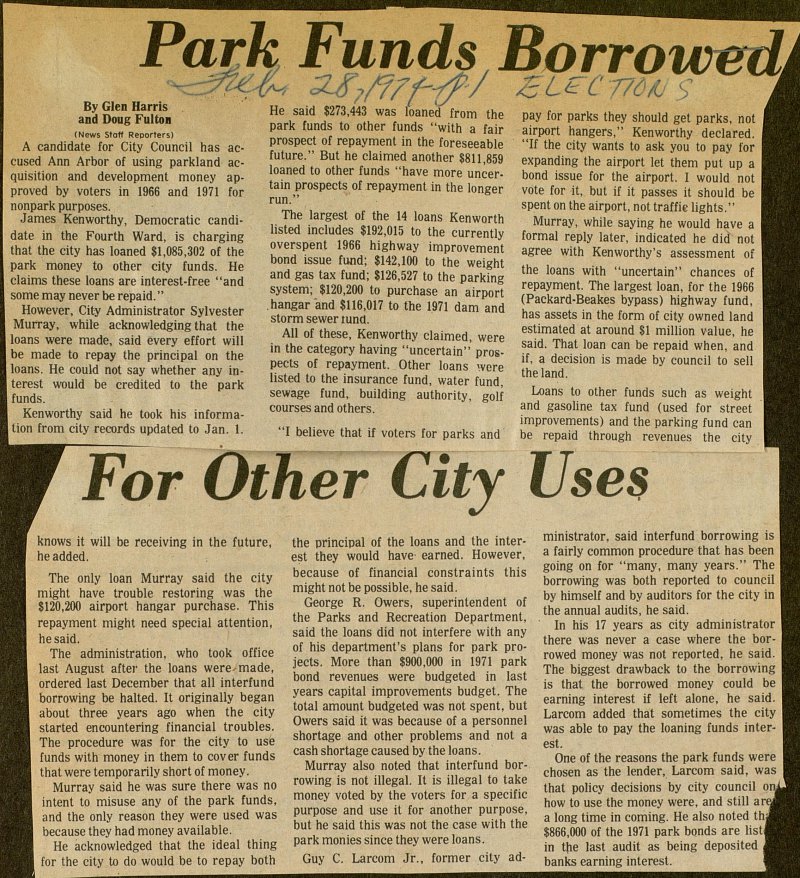 A candidate for City Council has accused Ann Arbor of using parkland acquisition and development money approved by voters in 1966 and 1971 for nonpark purposes. James Kenworthy, Democratie candidate in the Fourth Ward, is charging that the city has loaned $1,085,302 of the park money to other city funds. He claims these loans are interest-free "and some may never be repaid." However, City Administrator Sylvester Murray, while acknowledging that the loans were made, said every effort will be made to repay the principal on the loans. He could not say whether any interest would be credited to the park funds. Kenworthy said he took his information from city records updated to Jan. 1. He said $273,443 was loaned from the park funds to other funds "with a fair prospect of repayment in the foreseeable future." But he claimed another $811,859 loaned to other funds "have more uncertain prospects of repayment in the longer run." The largest of the 14 loans Kenworth listed includes $192,015 to the currently overspent 1966 highway improvement bond issue fund; $142,100 to the weight and gas tax fund; $126,527 to the parking system; $120,200 to purchase an airport hangar and $116,017 to the 1971 dam and storm sewer tund. All of these, Kenworthy claimed, were in the category having "uncertain" prospects of repayment. Other loans were listed to the insurance fund, water fund, sewage fund, building authority, golf coursesandothers. "I believe that if voters for parks and pay for parks they should get parks, not airport hangers," Kenworthy declared. "If the city wants to ask you to pay for expanding the airport let them put up a bond issue for the airport. I would not vote for it, but if it passes it should be spent on the airport, not traffie lights." Murray, while saying he would have a formal reply later, indicated he did not agree with Kenworthy's assessment of the loans with "uncertain" chances of repayment. The largest loan, for the 1966 (Packard-Beakes bypass) highway fund, has assets in the form of city owned land estimated at around $1 million value, he said. That loan can be repaid when, and if, a decisión is made by council to sell the land. Loans to other funds such as weight and gasoline tax fund (used for street improvements) and the parking fund can be repaid through revenues the city knows it will be receiving in the future, headded. The only loan Murray said the city might have trouble restoring was the $120,200 airport hangar purchase. This repayment might need special attention, hesaid. The administration, who took office last August after the loans weremade, ordered last December that all interfund borrowing be halted. It originally began about three years ago when the city started encountering financial troubles. The procedure was for the city to usé funds with money in them to cover funds that were temporarily short of money. Murray said he was sure there was no intent to misuse any of the park funds, and the only reason they were used was because they had money available. He acknowledged that the ideal thing for the city to do would be to repay both the principal of the loans and the interest they would earned. However, because of financial constraints this might not be possible, he said. George R. Owers, superintendent of the Parks and Recreation Department, said the loans did not interfere with any of his department's plans for park projects. More than $900,000 in 1971 park bond revenues were budgeted in last years capital improvements budget. The total amount budgeted was not spent, but Owers said it was because of a personnel shortage and other problems and not a cash shortage caused by the loans . Murray also noted that interfund borrowing is not illegal. It is illegal to take money voted by the voters for a specific purpose and use it for another purpose, but he said this was not the case with the park monies since they were loans. Guy C. Larcom Jr., former city ministrator, said interfund borrowing is a fairly common procedure that has been going on for "many, many years." The borrowing was both reported to council by himself and by auditors for the city in the annual audits, he said. In nis 17 years as city administrator there was never a case where the borrowed money was not reported, he said. The biggest drawback to the borrowing is that the borrowed money could be earning interest if left alone, he said. Larcom added that sometimes the city was able to pay the loaning funds interest. One of the reasons the park funds were chosen as the lender, Larcom said, was that policy decisions by city council on how to use the money were, and still are a long time in coming. He also noted Ihm $866,000 of the 1971 park bonds are listfl in the last audit as being deposited M banks earning interest.