'No' Votes Are Urge By Council 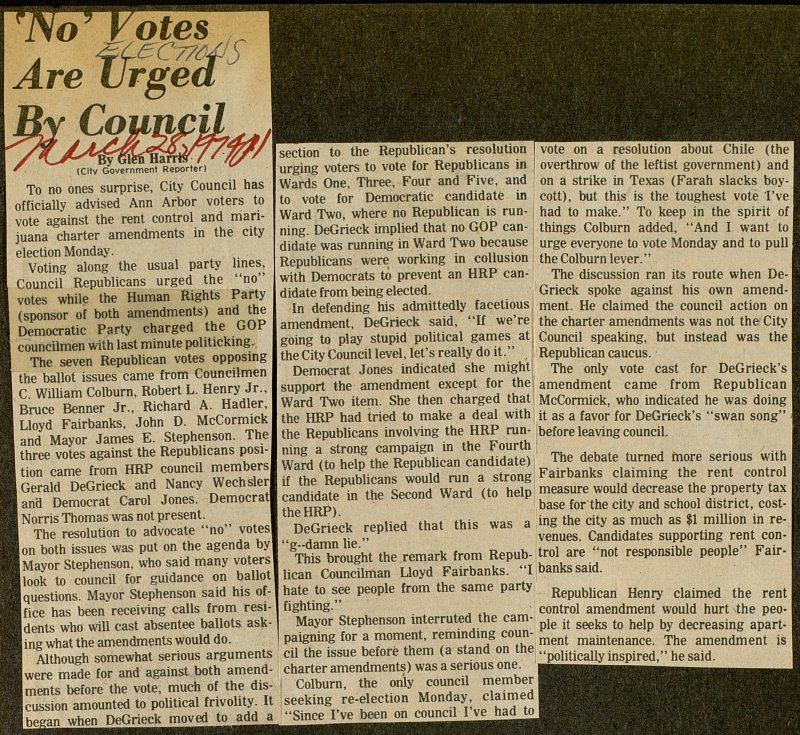 To no ones surprise, City Council has officially advised Ann Arbor voters to vote against the rent control and marijuana charter amendments in the city election Monday. Voting along the usual party lines, Council Republicans urged the "no" votes while the Human Rights Party (sponsor of both amendments) and the Democratic Party charged the GOP councilmen with last minute politicking. The seven Republican votes opposing the ballot issues came from Councilmen C. William Colburn, Robert L. Henry Jr., Bruce Benner Jr., Richard A. Hadler, Lloyd Fairbanks, John D. McCormick and Mayor James E. Stephenson. The three votes against the Republicans position came from HRP council members Gerald DeGrieck and Nancy Wechsler and Democrat Carol Jones. Democrat Norris Thomas was not present. The resolution to advocate "no" votes on both issues was put on the agenda by Mayor Stephenson, who said many voters look to council for guidance on ballot questions. Mayor Stephenson said his office has been receiving calls from residents who will cast absentee ballots asking what the amendments would do. Although somewhat serious arguments were made for and against both amendments before the vote, much of the discussion amounted to political frivolity. It began when DeGrieck moved to add a section to the Republican's resolution urging voters to vote for Republicans in Wards One, Three, Four and Five, and to vote for Democratic candidate in Ward Two, where no Republican is running. DeGrieck implied that no GOP candidate was running in Ward Two because Republicans were working in collusion with Democrats to prevent an HRP candidate from being elected. In defending his admittedly facetious amendment, DeGrieck said, "If we're going to play stupid political games at the City Council level , let' s really do it." Democrat Jones indicated she might support the amendment except for the, Ward Two item. She then charged that the HRP had tried to make a deal with the Republicans involving the HRP running a strong campaign in the Fourth Ward (to help the Republican candidate) if the Republicans would run a strong candidate in the Second Ward (to help the HRP). DeGrieck replied that this was a "g-damn lie." This brought the remark from Republican Councilman Lloyd Fairbanks. "I hate to see people from the same party fighting." Mayor Stephenson interrupted the campaigning for a moment, reminding council the issue before them (a stand on the charter amendments) was a serious one. Colburn, the only council member seeking re-election Monday, claimed "Since I've been on council I've had to vote on a resolution about Chile (the overthrow of the leftist government) and on a strike in Texas (Farah slacks boycott), but this is the toughest vote I've had to make." To keep in the spirit of things Colburn added, "And I want to urge everyone to vote Monday and to pull the Colburn lever." The discussion ran its route when DeGrieck spoke against his own amendment. He claimed the council action on the charter amendments was not the City Council speaking, but instead was the Republican caucus. The only vote cast for DeGrieck's amendment came from Republican McCormick, who indicated he was doing it as a favor for DeGrieck's "swan song" before leaving council. The debate turned more serious with Fairbanks claiming the rent control measure would decrease the property tax base for the city and school district, costing the city as much as $1 million in revenues. Candidates supporting rent control are "not responsible people" Fairbanks said. Republican Henry claimed the rent control amendment would hurt the people it seeks to help by decreasing apartment maintenance. The amendment is "politically inspired, ' ' he said.