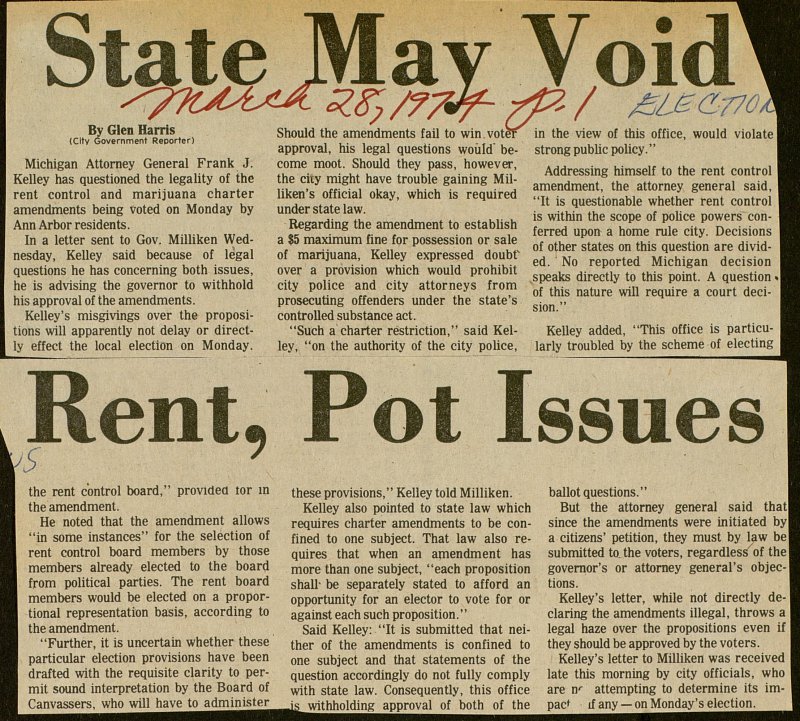 Michigan Attorney General Frank J. Kelley has questioned the legality of the rent control and marijuana charter amendments being voted on Monday by Ann Arbor residen ts. ín a letter sent to Gov. Milliken Wednesday, Kelley said because of legal questions he has concerning both issues, he is advising the governor to withhold his approval of the amendments. Kelley's misgivings over the propositions will apparently not delay or directly effect the local electioii on Monday. " f ' ' - , Should the amendments fail to win voter approval, nis legal questions woúld" become moot. Should they pass, however, the city might have trouble gaining Milliken's official okay, which is required under state law. Regarding the amendment to establish a $5 maximum fine for possession or sale of marijuana, Kelley expressed doubf over a provisión which would prohibit city pólice and city attorneys from prosecuting offenders under the state's controlled substance act. "Such a charter réstriction," said Kelley, "on the authority of the city pólice, r f ' ■ in the view of this office, would viólate I strong public policy." Addressing himself to the rent control I amendment, the attorney general said, "It is questionable whether rent control is within the scope of pólice powersconferred upon a home rule city. Decisions of other states on this question are divided. No reported Michigan decisión speaks directly to this point. A question of this nature will require a court decisión." Kelley added, "This office is particularly troubled by the scheme of electing the rent control board," providea lor in the amendment. He noted that the amendment allows "in some instances" for the selection of rent control board members by those members already elected to the board from political parties. The rent board members would be elected on a proporI tional representation basis, according to the amendment. "Further, it is uncertain whether these particular election provisions have been drafted with the requisite clarity to permit sound interpretation by the Board of Canvassers, who will have to administer these provisions," Kelley told Milliken. Kelley also pointed to state law which requires charter amendments to be confined to one subject. That law also requires that when an amendment has more than one subject, "each proposition shall1 be separately stated to afford an opportunity for an elector to vote for or against each such proposition. ' ' Said Kelley: "It is submitted that neither of the amendments is confined to one subject and that statements of the question accordingly do not fully comply with state law. Consequently, this office _is withholdine apDroval of both of the ballot questions." But the attorney general said thatl since the amendments were initiated byl a citizens' petition, they must by law bel submitted tathe voters, regardless' of thel governor's or attorney general's objec-l tions. Kelley's letter, while not directly declaring the amendments illegal, throws a legal haze over the propositions even if they should be approved by the voters. Kelley's letter to Milliken was received late this morning by city officials, who are nr attempting to determine its impac if any - onMonday'selection. '