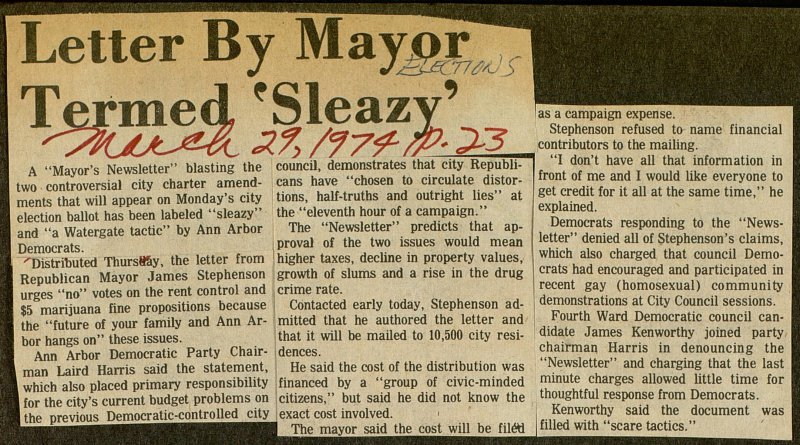 A "Mayor's Newsletter" blasting the two controversial city charter amendments that will appear on Monday's city election ballot has been labeled "sleazy" and "a Watergate tactic" by Ann Arbor Democrats. "Distributed ThursHSy, the letter f rom Republican Mayor James Stephenson urges "no" votes on the rent control and $5 marijuana fine propositions because the "future of your family and Ann Arbor hangs on" these issues. Ann Arbor Democratie Party Chairi man Laird Harris said the statement, which also placed primary responsibility I for the city's current budget problems on Ithe Drevious Democratic-controlled city council, demonstrates that city Republicans have "chosen to circuíate distortions, half-truths and outright lies" at the "eleventh hour of a campaign." The "Newsletter" predicts that approval of the two issues would mean higher taxes, decline in property values, growth of slums and a rise in the drug crime rate. Contacted early today, Stephenson admitted that he authored the letter and that it will be mailed to 10,500 city resii dences. He said the cost of the distribution was financed by a "group of civic-minded citizens," but said he did not know the exact cost involved. i I The mavor said the cost will be filéti l as a campaign expense. Stephenson refused to name financial contributors to the mailing. "I don't have all that information in front of me and I would like everyone to get credit for it all at the same time," he explained. Democrats responding to the "Newsletter" denied all of Stephenson's claims, which also charged that council Democrats had encouraged and participated in recent gay (homosexual) community demonstrations at City Council sessions. Fourth Ward Democratie council candidate James Kenworthy joined party, chairman Harris in denouncing the "Newsletter" and charging that the last minute charges allowed little time for thoughtful response from Democrats. Kenworthy said the document was filled with "scare tactics."