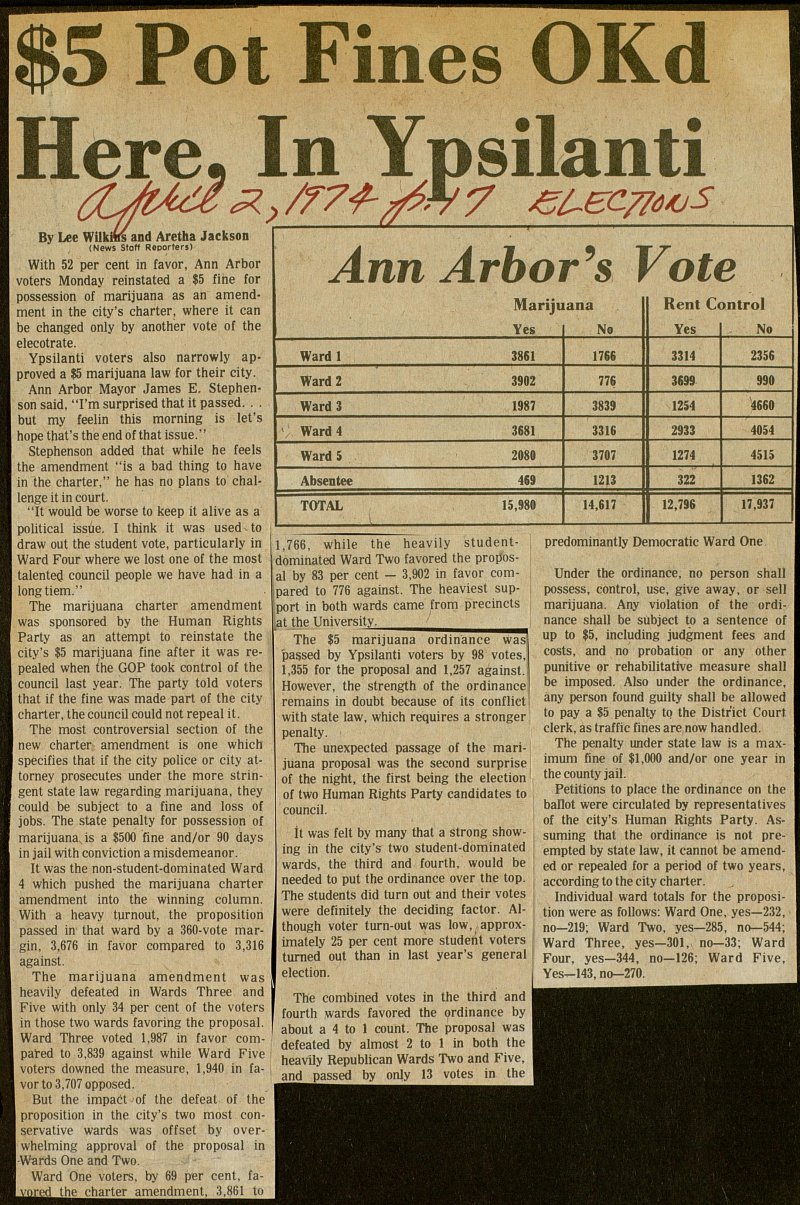 With 52 per cent in favor, Ann Arbor voters Monday reinstated a $5 fine for possession of marijuana as an amendment in the city's charter, where it can be changed only by another vote of the electorate. Ypsilanti voters also narrowly approved a $5 marijuana law for their city. Ann Arbor Mayor James E. Stephenson said, "I'm surprised that it passed. . . but my feeling this morning is let's hope that's the end of that issue." Stephenson added that while he feels the amendment "is a bad thing to have in the charter," he has no plans to challenge it in court. "It would be worse to keep it alive as a political issue. I think it was used-to draw out the student vote, particularly in Ward Four where we lost one of the most talented council people we have had in a longtime." The marijuana charter amendment was sponsored by the Human Rights Party as an attempt to reinstate the city's $5 marijuana fine after it was repealed when the GOP took control oí the council last year. The party told voters that if the fine was made part of the city charter, the council could not repeal it. The most controversial section of the new charter amendment is one which specifies that if the city pólice or city attorney prosecutes under the more stringent state law regarding marijuana, they could be subject to a fine and loss of jobs. The state penalty for possession of marijuana., is a $500 fine and or 90 days in jail with conviction a misdemeanor. It was the non-student-dominated Ward 4 which pushed the marijuana charter amendment into the winning column. With a heavy turnout, the proposition passed in that ward by a 360-vote margin, 3,676 in favor compared to 3,316 against. The marijuana amendment was heavily defeated in Wards Three and Five with only 34 per cent of the voters in those two wards favoring the proposal. Ward Three voted 1,987 in favor compared to 3,839 against while Ward Five voters downed the measure, 1,940 in favor to 3,707 opposed. But the impact of the defeat of the proposition in the city's two most conservative wards was offset by overwhelming approval of the proposal in Wards One and Two. Ward One voters, by 69 per cent, favored the charter amendment, 3,861 to 1,766, while the heavily student-dominated Ward Two favored the proposal by 83 per cent - 3,902 in favor compared to 776 against. The heaviest support in both wards came from precincts at the University. The $5 marijuana ordinance was passed by Ypsilanti voters by 98 votes, 1,355 for the proposal and 1,257 against.; However, the strength of the ordinance remains in doubt because of its conflict: with state law, which requires a stronger penalty. The unexpected passage of the marijuana proposal was the second surprise of the night, the first being the election of two Human Rights Party candidates to council. It was felt by many that a strong showing in the city's two student-dominated wards, the third and fourth, would be needed to put the ordinance over the top. The students did turn out and their votes were definitely the deciding factor. Although voter turn-out was low.approximately 25 per cent more student voters turned out than in last year's general i election. I The combined votes in the third and fourth wards favored the ordinance by about a 4 to 1 count. The proposal was defeated by almost 2 to 1 in both the heavily Republican Wards Two and Five, and passed by only 13 votes in the predominantly Democratic Ward One Under the ordinance, no person shall possess, control, use, give away, or sell marijuana. Any violation of the ordinance shall be subject to a sentence of up to $5, including judgment fees and costs, and no probation or any other punitive or rehabilitative measure shall be imposed. Also under the ordinance, any person found guilty shall be allowed to pay a $5 penalty to the District Court clerk, as traffic fines are now handled. The penalty under state law is a maximum fine of $1,000 and or one year in the county jail. Petitions to place the ordinance on the ballot were circulated by representatives of the city's Human Rights Party. Assuming that the ordinance is not preempted by state law, it cannot be amended or repealed for a period of two years, according to the city charter. Individual ward totals for the proposition were as follows: Ward One, yes- 232, no- 219; Ward Two, yes- 285, no- 544; Ward Three, yes- 301,, no- 33; Ward Four, yes- 344, no- 126; Ward Five, Yes- 143, no- 270.