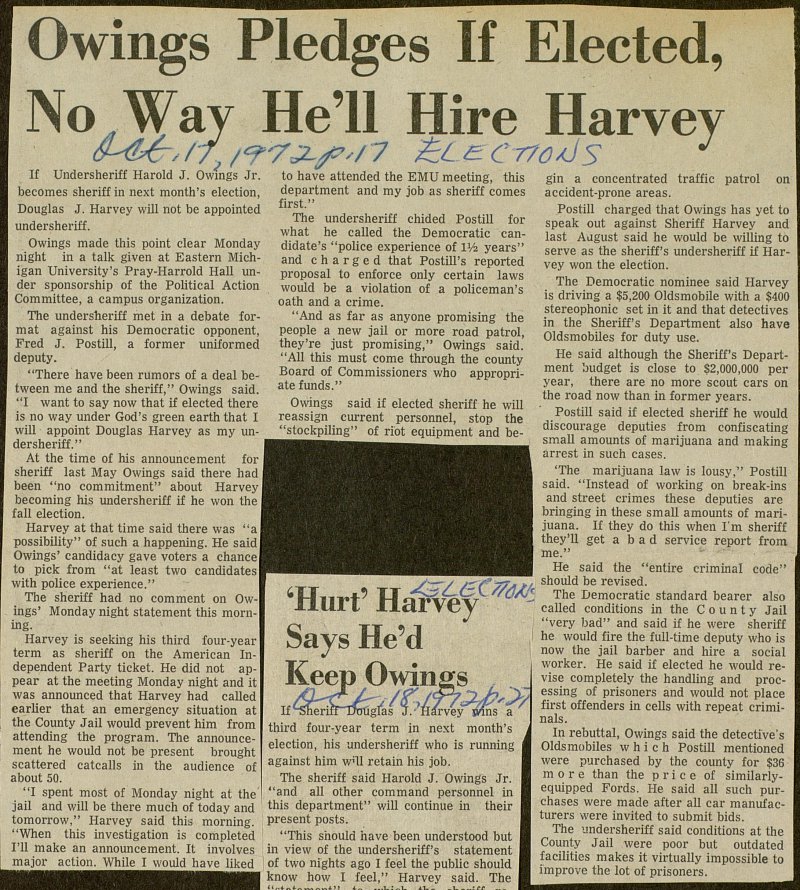 If Undersheriff Harold J. Owings Jr. becomes sheriff in next month's election, Douglas J. Harvey will not be appointed undersheriff. Owings made this point clear Monday night in a talk given at Eastern Michigan University's Pray-Harrold Hall under sponsorship of the Political Action Committee, a campus organization. The undersheriff met in a debate format against his Democratic opponent, Fred J. Postill, a former uniformed deputy. "There have been rumors of a deal between me and the sheriff," Owings said. "I want to say now that if elected there is no way under God's green earth that I will appoint Douglas Harvey as my undersheriff." At the time of his announcement for sheriff last May Owings said there had been "no commitment" about Harvey becoming his undersheriff if he won the fall election. Harvey at that time said there was "a possibility" of such a happening. He said Owings' candidacy gave voters a chance to pick from "at least two candidates with police experience." The sheriff had no comment on Owings' Monday night statement this morning. Harvey is seeking his third four-year term as sheriff on the American Independent Party ticket. He did not appear at the meeting Monday night and it was announced that Harvey had called earlier that an emergency situation at the County Jail would prevent him from attending the program. The announcement he would not be present brought scattered catcalls in the audience of about 50. "I spent most of Monday night at the jail and will be there much of today and tomorrow," Harvey said this morning. "When this investigation is completed I'll make an announcement. It involves major action. While I would have liked I to have attended the EMU meeting, this department and my job as sheriff comes first." The undersheriff chided Postill for what he called the Democratic candidate's "police experience of 1 1/2 years" and charged that Postill's reported proposal to enforce only certain laws would be a violation of a policeman's oath and a crime. "And as far as anyone promising the people a new jail or more road patrol, they're just promising," Owings said. "All this must come through the county Board of Commissioners who appropriate funds." Owings said if elected sheriff he will reassign current personnel, stop the "stockpiling" of riot equipment and begin a concentrated traffic patrol on accident-prone areas. Postill charged that Owings has yet to speak out against Sheriff Harvey and last August said he would be willing to serve as the sheriff's undersheriff if Harvey won the election. The Democratic nominee said Harvey is driving a $5,200 Oldsmobile with a $400 stereophonic set in it and that detectives in the Sheriff's Department also have Oldsmobiles for duty use. He said although the Sheriff's Department budget is close to $2,000,000 per year, there are no more scout cars on the road now than in former years. Postill said if elected sheriff he would discourage deputies from confiscating small amounts of marijuana and making arrest in such cases. 'The marijuana law is lousy," Postill said. "Instead of working on break-ins and street crimes these deputies are bringing in these small amounts of marijuana. If they do this when I'm sheriff they'd get a bad service report from me." He said the "entire criminal code" should be revised. The Democratic standard bearer also called conditions in the County Jail "very bad" and said if he were sheriff he would fire the full-time deputy who is now the jail barber and hire a social worker. He said if elected he would revise completely the handling and processing of prisoners and would not place first offenders in cells with repeat criminals. In rebuttal, Owings said the detective's Oldsmobiles w h i c h Postill mentioned were purchased by the county for $36 more than the price of similarly equipped Fords. He said all such purchases were made after all car manufacturers were invited to submit bids. The undersheriff said conditions at the County Jail were poor but outdated facilities makes it virtually impossible to improve the lot of prisoners.