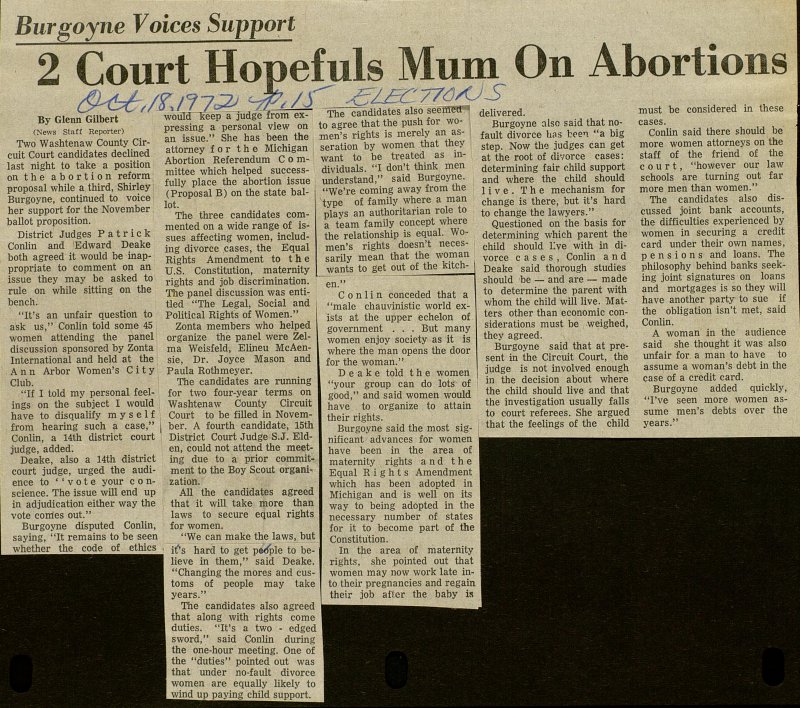 Two Washtenaw County Circuit Court candidates declined last night to take a position on the abortion reform proposal while a third, Shirley Burgoyne, continued to voice her support for the November ballot proposition. District Judges P a t r i c k Conlin and Edward Deake both agreed it would be inappropriate to comment on an issue they may be asked to rule on while sitting on the bench. "It's an unfair question to ask us," Conlin told some 45 women attending the panel discussion sponsored by Zonta International and held at the A n n Arbor Women's City Club. "If I told my personal feelings on the subject I would have to disqualify m y s e 1 f from hearing such a case," Conlin, a 14th district court judge, added: Deake, also a 14th district court judge, urged the audience to ''vote your c o nscience. The issue will end up in adjudication either way the vote comes out." Burgoyne disputed Conlin, saying, "It remains to be seen whether the code of ethics would Tiëep a judge f rom expressing a personal view on an issue." She has been the attorney f o r the Michigan Abortion Referendum C o mmittee which helped successfully place the abortion issue (Propos al B) on the state ballot. The three candidates commented on a wide range of issues affecting women, including divorce cases, the Equal Rights Amendment to the U.S. Constitution, maternity rights and job discrimination. The panel discussion was entitled "The Legal, Social and Political Rights of Women." Zonta members who helped organize the panel were Zelma Weisfeld, Elineu McAensie, Dr. Joyce Mason and Paula Rothmeyer. The candidates are running for two four-year terms on Washtenaw County Circuit Court to be filled in NovemI ber. A fourth candidate, 15th District Court Judge S.J. Elden, could not attend the meeting due to a prior commitment to the Boy Scout organization. All the candidates agreed that it will take more than laws to secure equal rights for women. "We can make the laws, but ifs hard to get pööple to believe in them," said Deake. "Changing the mores and customs of people may take years." The candidates also agreed that along with rights come duties. "It's a two - edged sword," said Conlin during the one-hour meeting. One of the "duties" pointed out was that under no-fault divorce women are equally likely to wind up paying child support. The candidates also seemecT ' to agree that the push for women's rights is merely an asseration by women that they want to be treated as individuáis. "I don't think men understand," said Burgoyne. "We're coming away irom the type of family where a man plays an authoritarian role to a team famüy concept where the relationship is equal. Women's rights doesn't necessarily mean that the woman wants to get out of the kitchen." C o n 1 i n conceded that a "male chauvinistic world exists at the upper echelon of government . . . But many women enjoy society as it is where the man opens the door for the woman." D e a k e told the women "your group can do lots of good," and said women would have to organize to attain their rights. Burgoyne said the most significant advances for women have been in the area of maternity rights and the Equal Rights Amendment which has been adopted in Michigan and is well on its way to being adopted in the necessary number of states for it to become part of the Constitution. In the area of maternity rights, she pointed out that women may now work late inte their pregnancies and regain their job ai'ter the baby is delivered. Burgoyne alsc said that nofault divorce has been "a big step. Now the judges can get at the root of divorce cases: determining fair chüd support and where the child should live. The mechanism for change is there, but it's hard to change the lawyers." Questioned on the basis for determining which parent the child should live with in divorce cases, Conlin and Deake said thorough studies should be - and are - made to determine the parent with whom the child will live. Matters other than economie considerations must be weighed, they agreed. Burgoyne said that at present in the Circuit Court, the judge is not involved enough in the decisión about where the child should live and that the investigation usually falls to court referees. She argued that the feelings of the child must be considered in these cases. Conlin said there should be more women attorneys on the staff of the friend of the c o u r t , "however our law schools are turning out far more men than women." The candidates also discussed joint bank accounts, the difficulties experienced by women in securing a credit card under their own names, pensions and loans. The philosophy behind banks seeking joint signatures on loans and mortgages is so they will have another to sue if the obligation isn't met, said Conlin. A woman in the audience said she thought it was also unfair for a man to have to assume a woman's debt in the case of a credit card. Burgoyne added quickly, "I've seen more women assume men's debts over the years."