Emu Professor In Race For County Board Seat 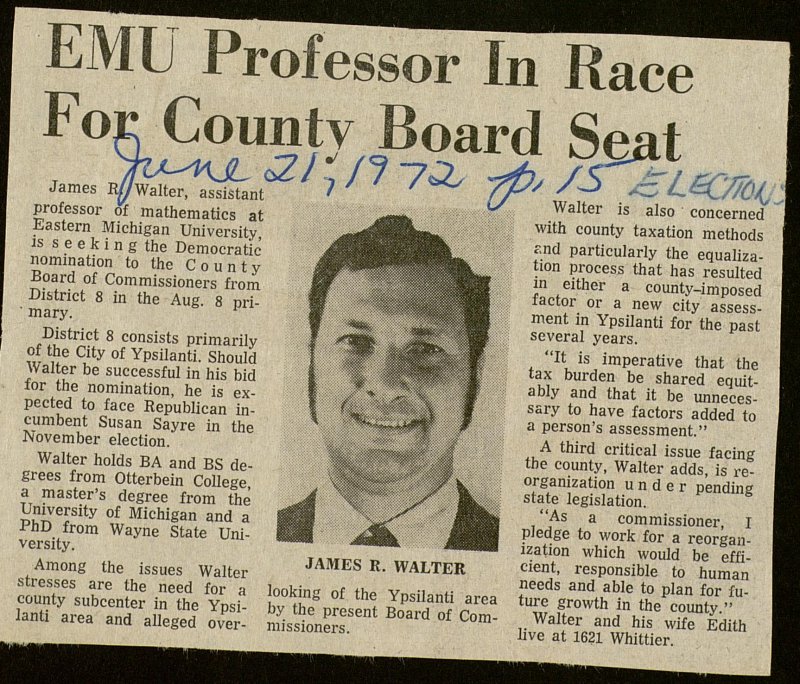 James R Walter, assistant professor of mathematica at Eastern Michigan University is seeking the Democratie nomination to the County Board of Commissioners from District 8 in the Aug. 8 primary. District 8 consists primarily of the City of Ypsilanti. Should Walter be successful in his bid tor the nomination, he is expected to face Republican incumbent Susan Sayre in the November election. Walter holds BA and BS degrees from Otterbein College a master's degree from the' Wersity of Michigan and a PhD from Wayne State University. Among the issues Walter stresses are the need for a county subcenter in the Ypsilanti area and alleged looking of the Ypsilanti area uy the present Board of Comnussioners. Walter is also concerned , with county taxation methods snd particularly the tion process that has resulted in either a county-imposed tactor or a new city ' ment in Ypsilanti for the past several years. "It is imperative that the tax burden be shared equitably and that it be unnecessary to have factors added to a person's assessment." A third critical issue facin? I the county, Walter adds, is organization u n d e r pending state legislation. "As a commissioner I pledge to work for a reorganizaron which would be efficiënt, responsible to human needs and able to plan for j ture growth in the county " Walter and his wife Edith live at 1621 Whittier.