Laws On Parents Not Valid - Kelley 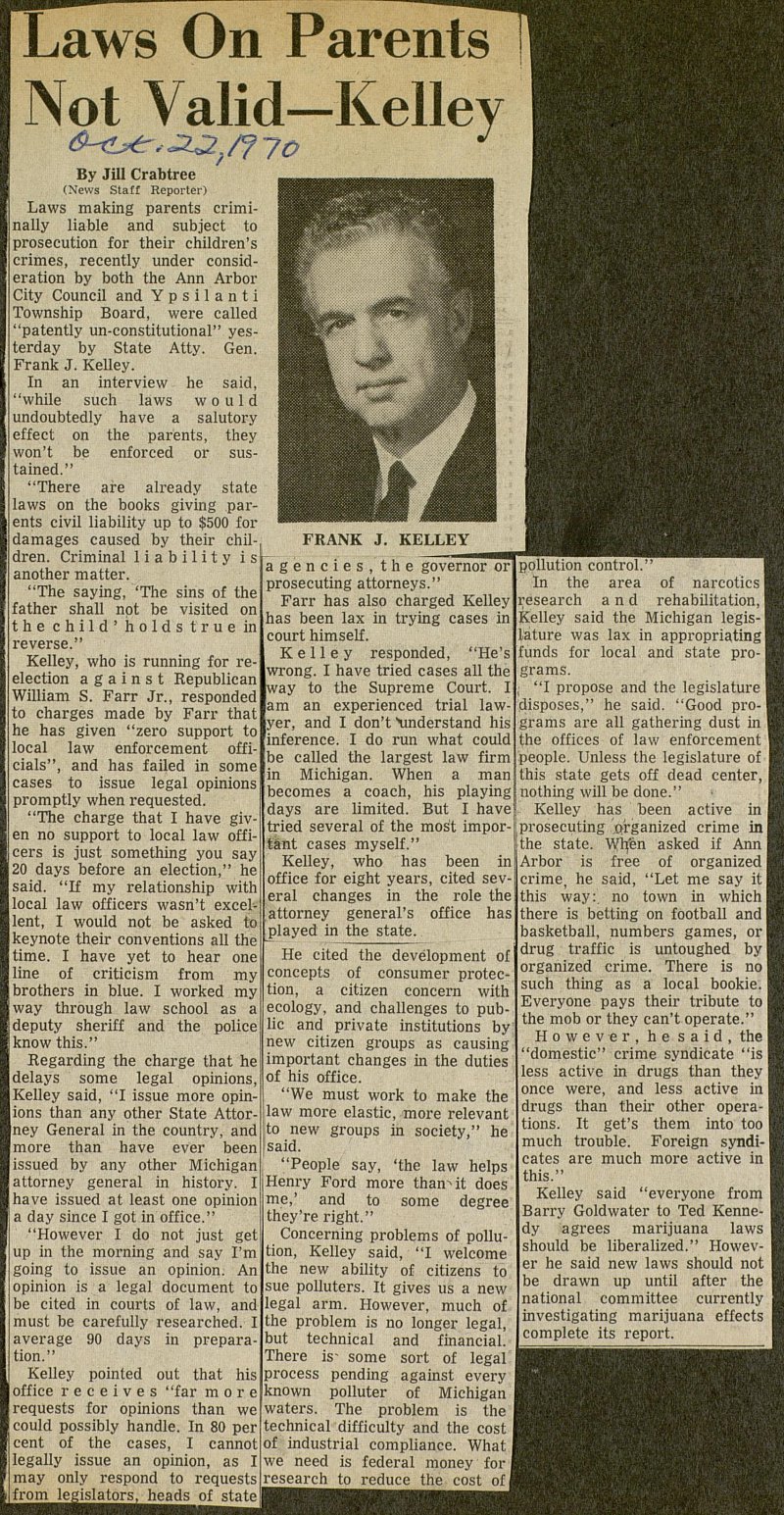 Laws making parents criminally liable and subject to prosecution for their children's crimes, recently under consideration by both the Ann Arbor City Council and Ypsilanti Township Board, were called "patently unconstitutional" yesterday by State Atty. Gen. Frank J. Kelley. In an interview he said, "while such laws would undoubtedly have a salutory effect on the parents, they won't be enforced or sustained." "There are already state laws on the books giving parents civil liability up to $500 for damages caused by their children. Criminal liability is another matter. "The saying, 'The sins of the father shall not be visited on the child' holds true in reverse." Kelley, who is running for reelection against Republican William S. Farr Jr., responded to charges made by Farr that he has given "zero support to local law enforcement officials", and has failed in some cases to issue legal opinions promptly when requested. "The charge that I have given no support to local law officers is just something you say 20 days before an election," he said. "If my relationship with local law officers wasn't excellent, I would not be asked to keynote their conventions all the time. I have yet to hear one line of criticism from my brothers in blue. I worked my way through law school as a deputy sheriff and the police know this." Regarding the charge that he delays some legal opinions, Kelley said, "I issue more opinions than any other State Attorney General in the country, and more than have ever been issued by any other Michigan attorney general in history. I have issued at least one opinion a day since I got in office." "However I do not just get up in the morning and say I'm going to issue an opinion. An opinion is a legal document to be cited in courts of law, and must be carefully researched. I average 90 days in preparation." Kelley pointed out that his office receives "far more requests for opinions than we could possibly handle. In 80 per cent of the cases, I cannot legally issue an opinion, as I may only respond to requests from legislators, heads of state agencies, the governor or prosecuting attorneys." Farr has also charged Kelley has been lax in trying cases in court himself . Kelley responded, "He's wrong. I have tried cases all the way to the Supreme Court. I am an experienced trial lawyer, and I don't understand his inference. I do run what could be called the largest law firm in Michigan. When a man becomes a coach, his playing days are limited. But I have tried several of the most important cases myself." Kelley, who has been in office for eight years, cited several changes in the role the attorney general's office has played in the state. He cited the development of concepts of consumer protection, a citizen concern with ecology, and challenges to public and private institutions by new citizen groups as causing important changes in the duties of his office. "We must work to make the law more elastic, more relevant to new groups in society," he said. "People say, 'the law helps Henry Ford more than it does me,' and to some degree they're right." Concerning problems of pollution, Kelley said, "I welcome the new ability of citizens to sue polluters. It gives us a new legal arm. However, much of the problem is no longer legal, but technical and financial. There some sort of legal process pending against every known polluter of Michigan waters. The problem is the technical difficulty and the cost of industrial compliance. What we need is federal money for research to reduce the cost of pollution control." In the area of narcotics research and rehabilitation, Kelley said the Michigan legislature was lax in appropriating funds for local and state programs. "I propose and the legislature disposes," he said. "Good programs are all gathering dust in t;he offices of law enforcement people. Unless the legislature of this state gets off dead center, nothing will be done." Kelley has been active in prosecuting organized crime in the state. When asked if Ann Arbor is free of organized crime, he said, "Let me say it this way: no town in which there is betting on football and basketball, numbers games, or drug traffic is untouched by organized crime. There is no such thing as a local bookie. Everyone pays their tribute to the mob or they can't operate." However, he said, the "domestic" crime syndicate "is less active in drugs than they once were, and less active in drugs than their other operations. It get's them into too much trouble. Foreign syndicates are much more active in this." Kelley said "everyone from Barry Goldwater to Ted Kennedy agrees marijuana laws should be liberalized." However he said new laws should not be drawn up until after the national committee currently investigating marijuana effects complete its report.