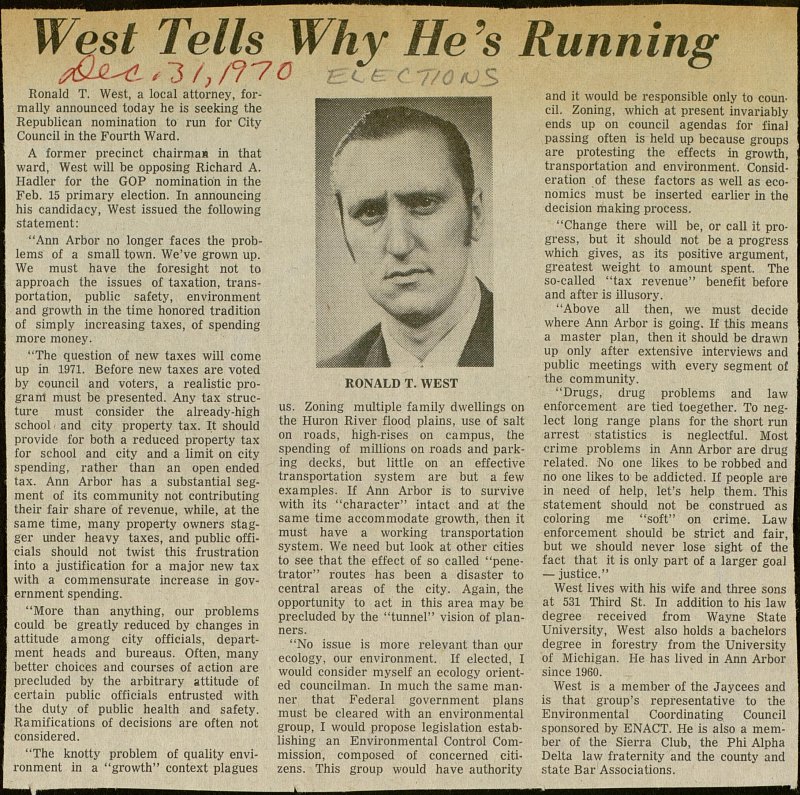 Ronald T. West, a local attorney, formally announced today he is seeking the Republican nomination to run for City Council in the Fourth Ward. A former precinct chairma in that ward, West will be opposing Richard A. Hadler for the GOP nomination in the Feb. 15 primary election. In announcing his candidacy, West issued the following statement: "Ann Arbor no longer faces the problems of a small town. We've grown up. We must have the foresight not to approach the issues of taxation, transportation, public safety, environment and growth in the time honored tradition of simply increasing taxes, of spending more money. "The question of new taxes will come up in 1971. Before new taxes are voted by council and voters, a realistic program must be presented. Any tax structure must consider the already-high school and city property tax. It should provide for both a reduced property tax for school and city and a limit on city spending, rather than an open ended tax. Ann Arbor has a substantial segment of its community not contributing their fair share of revenue, while, at the same time, many property owners stagger under heavy taxes, and public officials should not twist this frustration into a justification for a major new tax with a commensurate increase in government spending. "More than anything, our problems could be greatly reduced by changes in attitude among city officials, department heads and bureaus. Often, many better choices and courses of action are precluded by the arbitrary attitude of certain public officials entrusted with the duty of public health and safety. Ramifications of decisions are often not considered. "The knotty problem of quality environment in a "growth" context plagues us. Zoning multiple family dwellings on the Huron River flood plains, use of salt on roads, high-rises on campus, the spending of millions on roads and parking decká, but little on an effective transportation system are but a few examples. If Ann Arbor is to sur vive with its "eharacter" intact and at the same time accommodate growth, then it must have a working transportation system. We need but look at other cities to see that the effect of so called "penetrator" routes has been a disaster to central areas of the city. Again, the opportunity to act in this área may be precluded by the "tunnel" visión of planners. "No issue is more relevant than our ecology, our environment. If elected, I would consider myseif an ecology oriented councilman. In much the same manner that Federal government plans must be cleared with an environmental group, I would propose legislation establishing an Environmental Control Commission, composed of concerned citizens. This group would have authority and it would be responsible only to council. Zoning, which at present invariably ends up on council agendas for final passing often is held up because groups are protesting the effects in growth, transportation and environment. Consideration of these factors as well as economics must be inserted earlier in the decisión making process. "Change there will be, or cali it progress, but it should not be a progress whieh gives, as its positive argument, greatest weight to amount spent. The so-called "tax revenue" benefit before and after is illusory. "Above all then, we must decide where Ann Arbor is going. If this means a master plan, then it should be drawn up only after extensive interviews and public meetings with every segment of the community. "Drugs, drug problems and law enforcement are tied toegether. To neglect long range plans for the short run arrest statistics is neglectful. Most crime problems in Ann Arbor are drug related. No one likes to be robbed and no one likes to be addicted. If people are in need of help, let's help them. This statement should not be construed as coloring me "soft" on crime. Law enforcement should be strict and fair, but we should never lose sight of the fact that it is only part of a larger goal - justice." West lives with his wife and three sons at 531 Third St. In addition to his law degree received from Wayne State University, West also holds a bachelors degree in forestry from the University of Michigan. He has lived in Ann Arbor since 1960. West is a member of the Jaycees and is that group's representative to the Environmental Coordinating Council sponsored by ENACT. He is also a member of the Sierra Club, the Phi Alpha Delta law fraternity and the county and state Bar Associations.