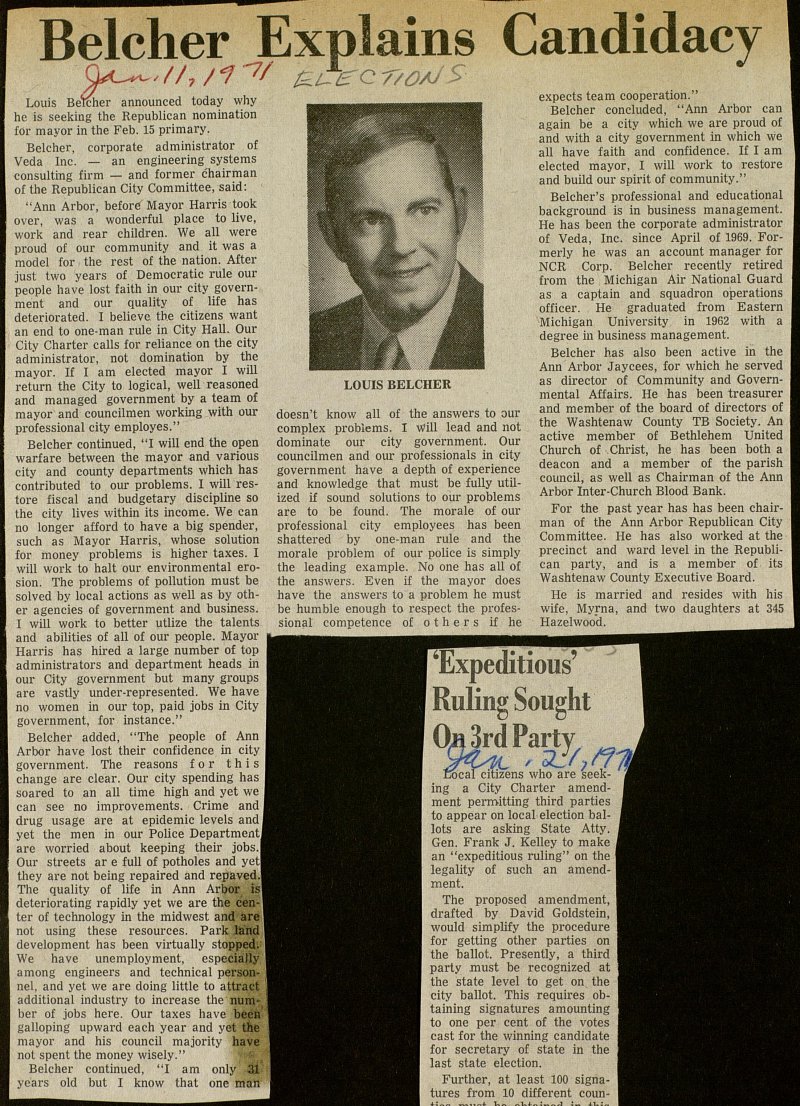 ' Louis Bercher announced today why he is seeking the Republican nomination for mayor in the Feb. 15 primary. Belcher, corporate administrator of Veda Inc. - an engineering systems consulting firm - and former chairman of the Republican City Committee, said: "Ann Arbor, beforé Mayor Harris took over, was a wonderful place to live, work and rear children. We all were proud of our community and it was a model for the rest of the nation. After just two years of Democratie rule our people have lost faith in our city government and our quality of life has deteriorated. I believe the citizens want an end to one-man rule in City Hall. Our City Charter calis for reliance on the city administrator, not domination by the mayor. If I am elected mayor I will return the City to logical, well reasoned and managed government by a team of mayor and councilmen working with our professional city employés." Belcher continued, "I will end the open warfare between the mayor and various city and county departments which has contributed to our problems. I will restore fiscal and budgetary discipline so the city lives within its income. We can no longer afford to have a big spender, such as Mayor Harris, whose solution for money problems is higher taxes. I will work to halt our environmental erosión. The problems of pollution must be solved by local actions as well as by other agencies of government and business. I will work to better utlize the talents and abilities of all of our people. Mayor Harris has hired a large number of top administrators and department heads in our City government but many groups are vastly under-represented. We have no women in our top, paid jobs in City government, for instance." Belcher added, "The people of Ann Arbor have lost their confidence in city government. The reasons for this change are clear. Our city spending has I soared to an all time high and yet we can see no improvements. Crime and I drug usage are at epidemie levéis andl yet the men in our Pólice Departmentl are worried about keeping their jobs.l Our streets ar e full of potholes and yetl they are not being repaired and repaved.l The quality of life in Ann Arbor isl deteriora ting rapidly yet we are the cen- ter of technology in the midwest and are not using these resources. Park land development has been virtually stopped. i We have unemployment, especially among engineers and technical personI nel, and yet we are doing little to attract I additional industry to increase the numI ber of jobs here. Our taxes have been I galloping upward each year and yet the I mayor and his council majority have not spent the money wisely." Belcher continued, "I am only 31 years oíd but I know that one man doesn't know all of the answers to our complex problems. I will lead and not domínate our city government. Our councilmen and our professionals in city government have a depth of experience and knowledge that must be fully utilized if sound solutions to our problems are to be found. The morale of our professional city employees has been shattered by one-man rule and the morale problem of our pólice is simply the leading example. No one has all Of the answers. Even if the mayor does have the answers to a problem he must be humble enough to respect the professional competence of others if he expects team cooperation." Belcher concluded, "Ann Arbor can I again be a city which we are proud of and with a city government in which we all have faith and confidence. If I am elected mayor, I will work to restore and build our spirit of community." Belcher's professional and educational background is in business management. He has been the corporate administrator of Veda, Inc. since April of 1969. Formerly he was an account manager for NCR Corp. Belcher recently retired f rom the Michigan Air National Guard I as a captain and squadron operations officer. He graduated from Eastern Michigan University in 1962 with a degree in business management. Belcher has also been active in the Ann Arbor Jaycees, for which he served as director of Community and I mental Affairs. He has been treasurer and member of the board of directors of the Washtenaw County TB Society. An active member of Bethlehem United Church of Christ, he has been both a deacon and a member of the parish council, as well as Chairman of the Ann Arbor Inter-Church Blood Bank. For the past year has has been chairman of the Ann Arbor Republican City Committee. He has also worked at the precinct and ward level in the Republican party, and is a member of its Washtenaw County Executive Board. He is married and resides with his wife, Myrna, and two daughters at 345 Hazelwood.