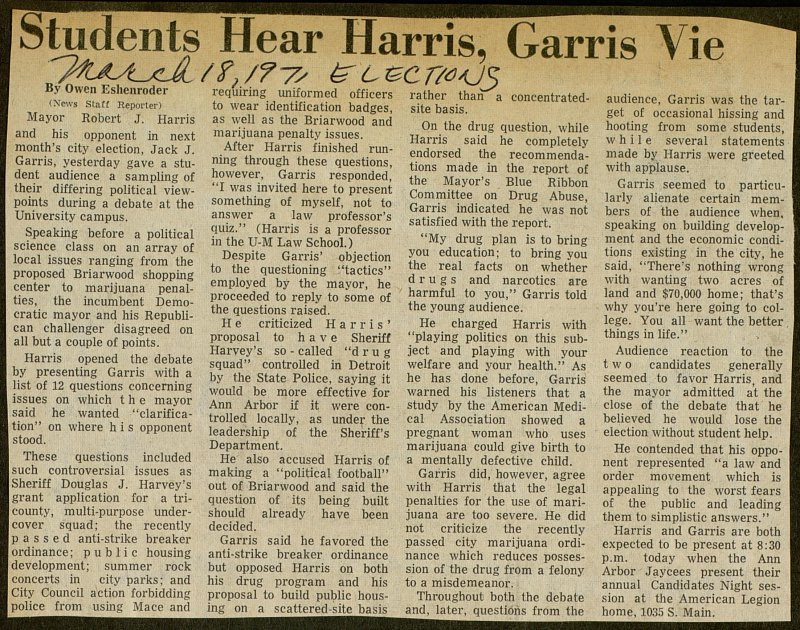 Mayor Robert J. Harris and his opponent in next month's city election, Jack J. Garris, yesterday gave a student audience a sampling of their differing political viewpoints during a debate at the University campus. Speaking before a political science class on an array of local issues ranging from the proposed Briarwood shopping center to marijuana penalties, the incumbent Democratic mayor and his Republican challenger disagreed on all but a couple of points. Harris opened the debate by presenting Garris with a list of 12 questions concerning issues on which the mayor said he wanted "clarification" on where his opponent stood. These questions included such controversial issues as Sheriff Douglas J. Harvey's grant application for a tri-county, multi-purpose undercover squad; the recently passed anti-strike breaker ordinance ; public housing development; summer rock concerts in city parks; and City Council action forbidding police from using Mace and requiring uniformed officers to wear identification badges, as well as the Briarwood and marijuana penalty issues. After Harris finished running through these questions, however, Garris responded, "I was invited here to present something of myself, not to answer a law professor's quiz." (Harris is a professor in the U-M Law School.) Despite Garris' objection to the questioning "tactics" employed by the mayor, he proceeded to reply to some of the questions raised. He criticized Harris' proposal to have Sheriff Harvey's so-called "drug squad" controlled in Detroit by the State Police, saying it would be more effective for Ann Arbor if it were controlled locally, as under the leadership of the Sheriff's Department. He also accused Harris of making a "political football" out of Briarwood and said the question of its being built should already have been decided. Garris said he favored the anti-strike breaker ordinance but opposed Harris on both his drug program and his proposal to build public housing on a scattered-site basis rather than a concentrated site basis. On the drug question, while Harris said he completely endorsed the recommendations made in the report of the Mayor's Blue Ribbon Committee on Drug Abuse, Garris indicated he was not satisfied with the report. "My drug plan is to bring you education; to bring you the real facts on whether drugs and narcotics are harmful to you," Garris told the young audience. He charged Harris with "playing politics on this subject and playing with your welfare and your health." As he has done before, Garris warned his listeners that a study by the American Medical Association showed a pregnant woman who uses marijuana could give birth to a mentally defective child. Garris did, however, agree with Harris that the legal penalties for the use of marijuana are too severe. He did not criticize the recently passed city marijuana ordinance which reduces possession of the drug from a felony to a misdemeanor. Throughout both the debate and, later, questions from the audience, Garris was the target of occasional hissing and hooting from some students, while several statements made by Harris were greeted with applause. Garris seemed to particularly alienate certain members of the audience when. speaking on building development and the economic conditions existing in the city, he said, "There's nothing wrong with wanting two acres of land and $70,000 home; that's why you're here going to college. You all want the better things in life." . . Audience reaction to the two candidates generally seemed to favor Harris, and the mayor admitted at the close of the debate that he believed he would lose the election without student help. He contended that his opponent represented "a law and order movement which is appealing to the worst fears of the public and leading them to simplistic answers." Harris and Garris are both expected to be present at 8:30 p.m. today when the Ann Arbor Jaycees present their annual Candidates Night session at the American Legion home, 1035 S. Main.