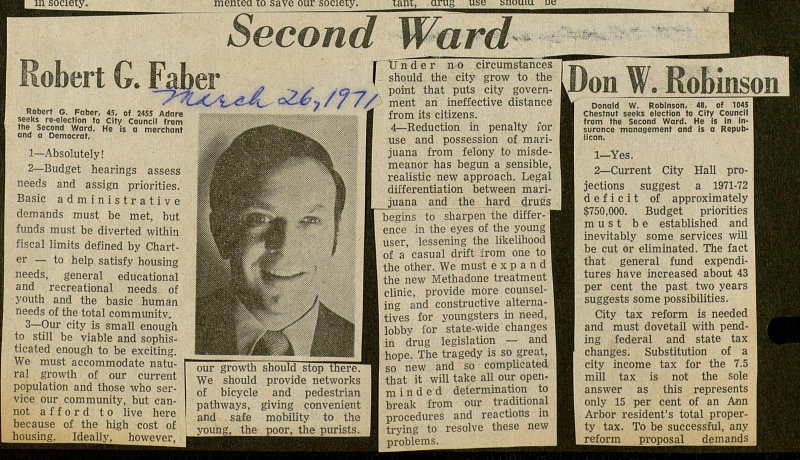 Robert G. Faber, 45, of 2455 Adare seeks re-election to City Council from the Second Ward. He is a merchant and a Democrat. 1- Absolutely! 2 - Budget hearings assess needs and assign priorities. Basic administrative demands must be met, but funds must be diverted within fiscal limits defined by Charter - to help satisfy housing needs, general educational and recreational needs of youth and the basic human needs of the total community. 3- Our city is small enough to still be viable and sophisticated enough to be exciting. We must accommodate natural growth of our current population and those who service our community, but cannot afford to live here because of the high cost of housing. Ideally, however, our growth should stop there. We should provide networks of bicycle and pedestrian pathways, giving convenient and safe mobility to the young, the poor, the purists. Under no circumstances should the city grow to the point that puts city government an ineffective distance from its citizens. 4- Reduction in penalty for use and possession of marijuana from felony to misdemeanor has begun a sensible, realistic new approach. Legal differentiation between marijuana and the hard drugs begins to sharpen the difference in the eyes of the young user, lessening the likelihood of a casual drift from one to the other. We must expand the new Methadone treatment clinic, provide more counseling and constructive alternatives for youngsters in need, lobby for state-wide changes in drug legislation - and hope. The tragedy is so great, so new and so complicated that it will take all our open-minded determination to break from our traditional procedures and reactions in trying to resolve these new problems. Don W. Robinson, 48, of 1045 Chestnut seeks election to City Council from the Second Ward. He is in insurance management and is a Republican. 1- Yes. 2- Current City Hall projections suggest a 1971-72 deficit of approximately $750,000. Budget priorities must be established and inevitably some services will be cut or eliminated. The fact that general fund expenditures have increased about 43 per cent the past two years suggests some possibilities. City tax reform is needed and must dovetail with pending federal and state tax changes. Substitution of a city income tax for the 7.5 mill tax is not the sole answer as this represents only 15 per cent of an Ann Arbor resident's total property tax. To be successful, any reform proposal demands . . .