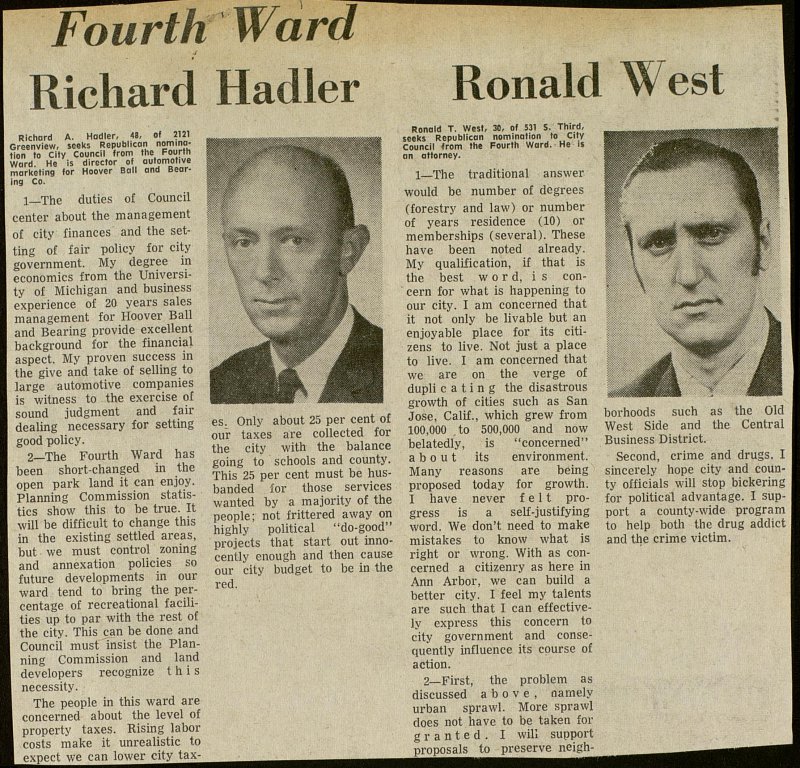 Fourth Ward Richard Hadier Richard A. Hadler, 48, of 2121 Greenview, seeks Repubhcan nornination to City Council from the Fourth Word He is director of automotive morketing for Hoover Ball and Bearing Co. 1- The duties of Council center about the management I of city f nances and the setting of fair policy for city government. My degree in economics from the University of Michigan and business experience of 20 years sales management for Hoover Ball and Bearing provide excellent background for the financia! aspect. My proven success in the give and take of selling to large automotive companies is witness to the exercise of sound judgment and fair dealing necessary for setting good policy. 2- The Fourth Ward has been short-changed in the open park land it can enjoy. Planning Commission statistics show this to be true. It will be difficult to change this in the existing settled areas, but we must control zoning and annexation policies so future developments in our ward tend to bring the percentage of recreational facilities up to par with the rest of the city. This can be done and Council must insist the PlanI ning Commission and land I developers recognize this I necessity. I The people in this ward are I concerned about the level of I property taxes. Rising labor I costs make it unrealistic to I PYnppt we can lower city es. Only about 25 per cent of our taxes are collected for the city with the balance going to schools and county. This 25 per cent must be husbanded ior those services wanted by a majority of the people; not frittered away on highly political "do-good" projects that start out innocently enough and then cause our city budget to be in the red. Ronald West Ronald T. West, 30, of 531 S. Third, seeks Ropublican nomination to City Council Irom the Fourth Ward. He is an attorney. 1- The traditional answer would be number of degrees (forestry and law) or number of years residence (10) or memberships (several). These have been noted already. My qualiiication, if that is the best word, is concern for what is happening to our city. I am concerned that it not only be livable but an enjoyable place for its citizens to live. Not just a place to live. I am concerned that we are on the verge of dupli c a t i n g the disastrous growth of cities such as San José, Calif., which grew from 100,000 .to 500,000 and now belatedly, is "concerned" a b o u t its environment. Many reasons are being proposed today for growth. I have never feit progress is a self-justifying word. We don't need to make ■ mistakes to know what is : right or wrong. With as con: cerned a citizenry as here in Ann Arbor, we can build a better city. I feel my talents are such that I can effectively express this concern to city government and consequently influence its course of action. 2- First, the problem as discussed above , narnely urban sprawl. More sprawl does not have to be taken for granted. I will support nroposals to preserve borhoods such as the Old West Side and the Central Business District. Second, crime and drugs. I sincerely hope city and county officials will stop bickering for political advantage. I support a county-wide program to help both the drug addict and the crime victim.