Candidates In Third Clash On Most Issues 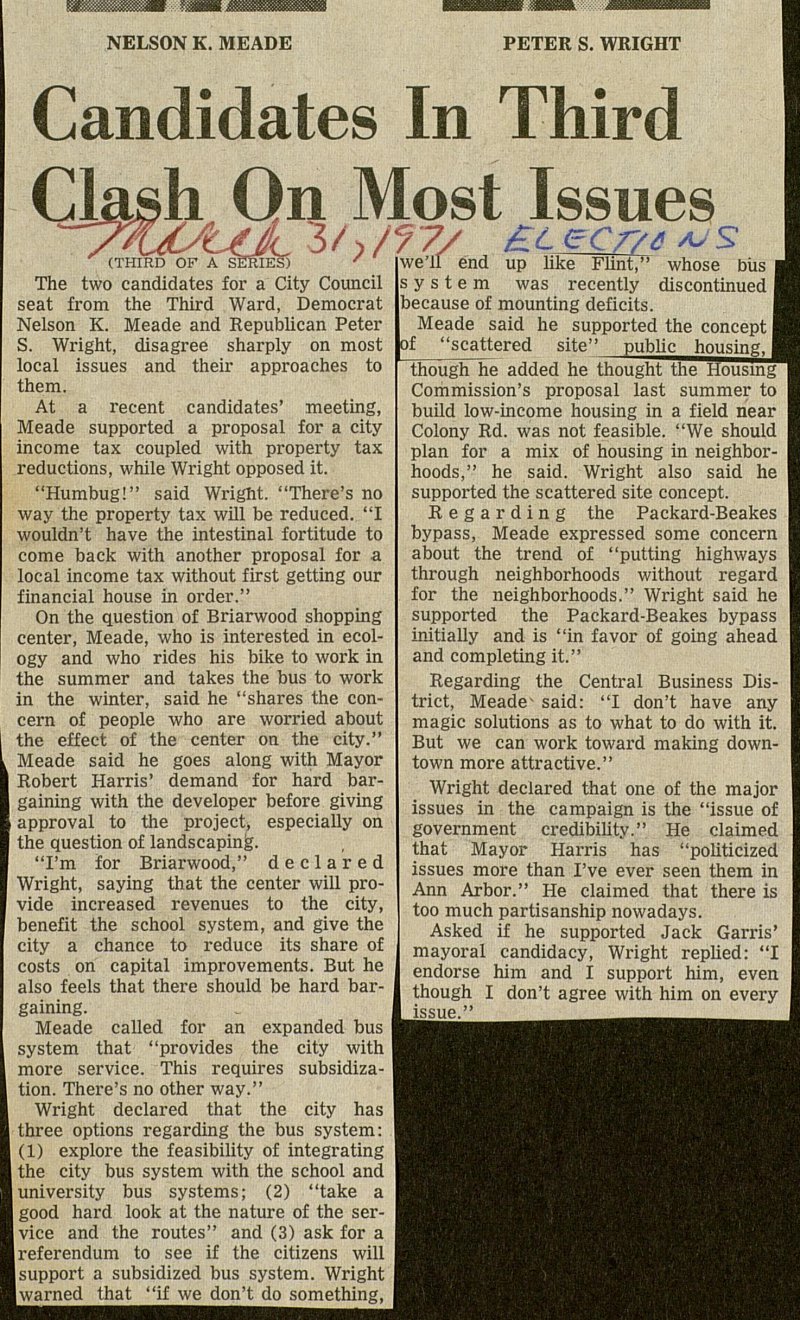 The two candidates for a City Council seat from the Third Ward, Democrat Nelson K. Meade and Republican Peter S. Wright, disagree sharply on most local issues and their approaches to them. At a recent candidates' meeting, Meade supported a proposal for a city income tax coupled with property tax reductions, while Wright opposed it. "Humbug!" said Wright. "There's no way the property tax will be reduced. "I wouldn't have the intestinal fortitude to come back with another proposal for a local income tax without first getting our financial house in order." On the question of Briarwood shopping center, Meade, who is interested in ecology and who rides his bike to work in the summer and takes the bus to work in the winter, said he "shares the concern of people who are worried about the effect of the center on the city." Meade said he goes along with Mayor Robert Harris' demand for hard bargaining with the developer before giving approval to the project, especially on the question of landscaping. "Fm for Briarwood," declared Wright, saying that the center will provide increased revenues to the city, benefit the school system, and give the city a chance to reduce its share of costs on capital improvements. But he also feels that there should be hard bargaining. Meade called for an expanded bus system that "provides the city with more service. This requires subsidization. There's no other way." Wright declared that the city has three options regarding the bus system: (1) explore the feasibility of integrating the city bus system with the school and luniversity bus systems; (2) "take a good hard look at the nature of the service and the routes" and (3) ask for a [referendum to see if the citizens will I support a subsidized bus system. Wright jwarned that "if we don't do something, 7 cl c rl we'll end up like Flint," whose bus ■ s y s t e m was recently discontinued I because of mounting déficits. Meade said he supported the concept I of "scattered site" public housing. M though he added he thought theHÖïïsmgn Commission's proposal last summer to build low-income housing in a field near Colony Rd. was not feasible. "We should plan for a mix of housing in neighborhoods," he said. Wright also said he supported the scattered site concept. Regarding the Packard-Beakes bypass, Meade expressed some concern about the trend of "putting highways through neighborhoods without regard for the neighborhoods." Wright said he supported the Packard-Beakes bypass initially and is "in favor of going ahead and completing it." Regarding the Central Business District, said: "I don't have any magie solutions as to what to do with it. But we can work toward making downtown more attractive." Wright declared that one of the major issues in the campaign is the "issue of government credibility." He claimed that Mayor Harris has "politicized issues more than I've ever seen them in Ann Arbor." He claimed that there is too much partisanship nowadays. Asked if he supported Jack Garris' mayoral candidacy, Wright replied: "I endorse him and I support him, even though I don't agree with him on every issue."