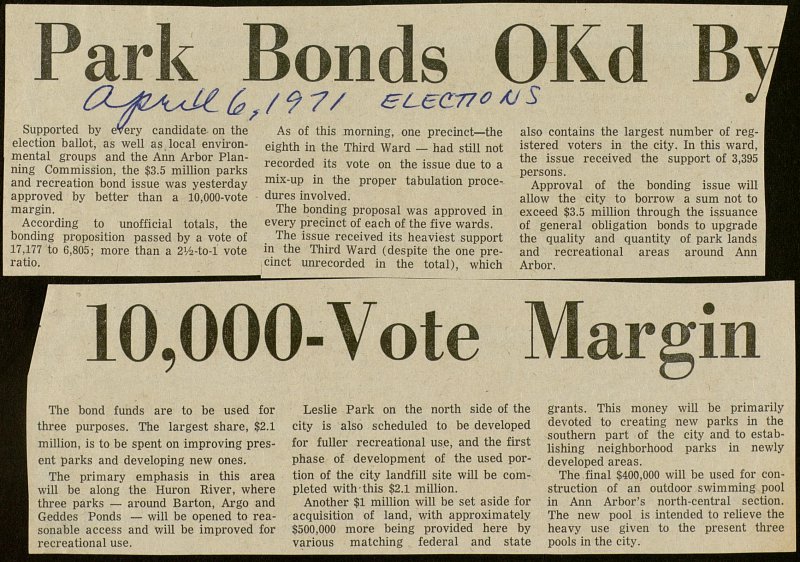 Supported by every candidate on the election ballot, as well as local environmental groups and the Ann Arbor Planning Commission, the $3.5 million parks and recreation bond issue was yesterday approved by better than a 10,000-vote margin. According to unofficial totals, the bonding proposition passed by a vote of 17,177 to 6,805; more than a 2Vi-ïo-i vote ratio. - ff -' - ■- - I ' As of this morning, one precinct- the eighth in the Third Ward - had still not recorded its vote on the issue due to a mix-up in the proper tabulation procedures in vol ved. The bonding proposal was approved in every precinct of each of the five wards. The issue received its heaviest support in the Third Ward (despite the one precinct unrecorded in the total), which also contains the largest number of I istered voters in the city. In this ward, I the issue received the support of 3,395 I persons. Approval of the bonding issue will I allow the city to borrow a sum not to I exceed $3.5 million through the issuance I of general obligation bonds to upgrade the quality and quantity of park lands I and recreational areas around Ann I Arbor. - ---- The bond funds are to be used for three purposes. The largest share, $2.1 million, is to be spent on improving present parks and developing new ones. The primary emphasis in this area will be along the Huron River, where three parks - around Barton, Argo and Geddes Ponds - will be opened to reasonable access and will be improved for recreational use. Leslie Park on the north side of the city is also scheduled to be developed for fuller recreational use, and the first phase of development of the used portion of the city landfill site will be completed withthis $2.1 million. Another $1 million will be set a side for acquisition of land, with approximately $500,000 more being provided here by various matching federal and state grants. This money will be primarily devoted to creating new parks in the southern part of the city and to establishing neighborhood parks in newly developed areas. The final $400,000 will be used for construction of an outdoor swimming pool in Ann Arbor's north-central section. The new pool is intended to relieve the heavy use given to the present three pools in the city.