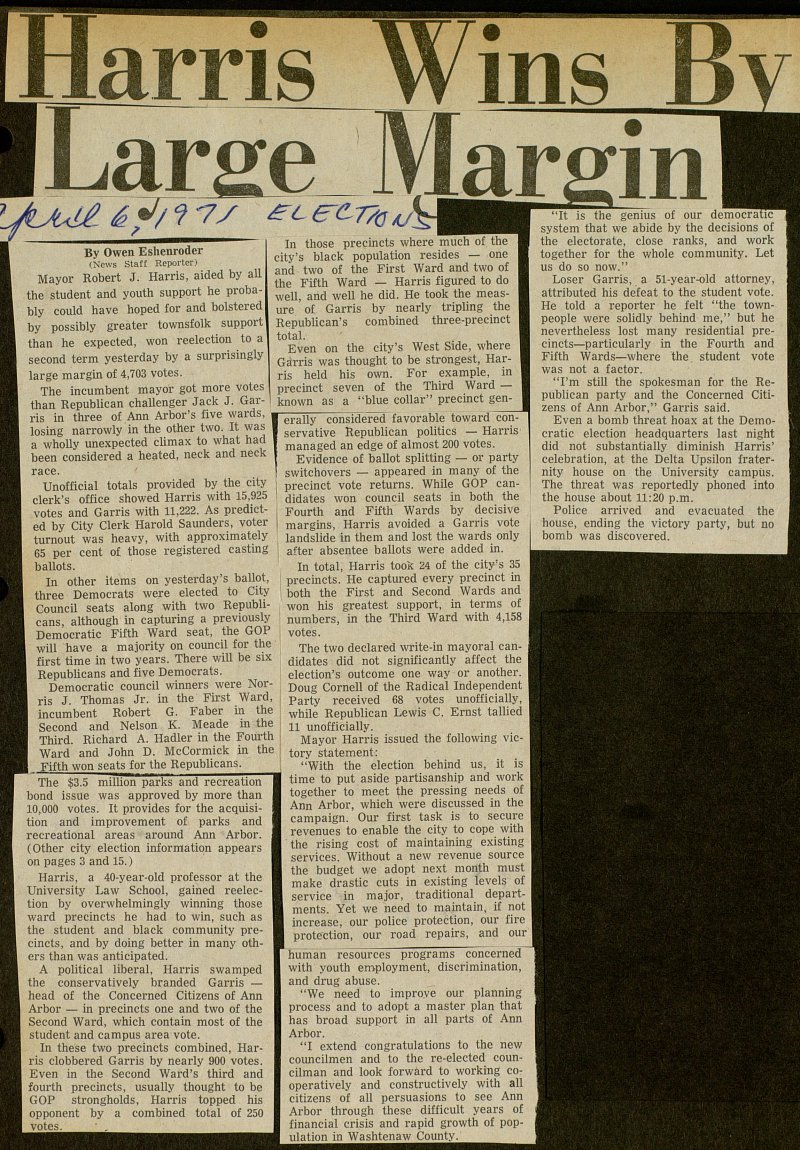 Mayor Robert J. Harris, aided by all the student and youth support he probably could have hoped for and bolstered by possibly greater townsfolk support than he expected, won reelection to a second term yesterday by a surprisingly large margin of 4,703 votes. The incumbent mayor got more votes than Republican challenger Jack J. Garrís in three of Ann Arbor's five wards, . losing narrowly in the other two. It was a wholly unexpected climax to what had been considered a heated, neck and neck race. Unofficial totals provided by the city clerk's office showed Harris with 15,925 votes and Garrís with 11,222. As predicted by City Clerk Harold Saunders, voter turnout was heavy, with approximately 65 per cent of those registered casting ballots. ín other items on yesterday's ballot, I three Democrats were elected to City Council seats along with two Republicans, although in capturing a previously Democratie Fifth Ward seat, the GOP I will have a majority on council for the I first time in two years. There will be six I Republicans and five Democrats. Democratie council winners were Norris J. Thomas Jr. in the First Ward, I incumbent Robert G. Faber in the Second and Nelson K. Meade in the Third. Richard A. Hadler in the Fourth Ward and John D. McCormick in the Fifth won seats for the Republicans. The $3.5 million parks and recreation bond issue was approved by more than 10,000 votes. It provides for the acquisition and improvement of parks and recreational areas around Ann Arbor. (Other city election informatiqn appears on pages 3 and 15.) Harris, a 40-year-old professor at the University Law School, gained reelection by overwhelmingly winning those I ward precincts he had to win, such as the student and black community pre1 cincts, and by doing better in many others than was anticipated. I A political liberal, Harris swamped I the conservatively branded Garris - I head of the Concerned Citizens of Ann I Arbor - in precincts one and two of the I Second Ward, which contain most of the I student and campus área vote. In these two precincts combined, HarI ris clobbered Garris by nearly 900 votes. I Even in the Second Ward's third and I fourth precincts, usually thought to be I GOP strongholds, Harris topped his I opponent by a combined total of 250 I votes. ■ . In those precincts where much of the city's black population resides - one and two of the First Ward and two of the Fifth Ward - Harris figured to do well, and well he did. He took the measure of Garris by nearly tripling the Republican's combined three-precinct total. Even on the city's West Side, where Garrís was thought to be strongest, Harris held his own. For example, in precinct seven of the Third Ward - known as a "blue collar" precinct genIerally considered favorable toward conservative Republican politics - Harris managed an edge of almost 200 votes. Evidence of ballot splitting - or party switchovers - appeared in many of the i precinct vote returns. While GOP can! didates won council seats in both the Fourth and Fifth Wards by decisive : margins, Harris avoided a Garris vote landslide in them and lost the wards only after absentee ballots were added in. In total, Harris took 24 of the city's 35 precincts. He captured every precinct in both the First and Second Wards and won his greatest support, in terms of numbers, in the Third Ward with 4,158 votes. The two declared write-in mayoral I didates did not significantly affect the election's outcome one way or another. I Doug Cornell of the Radical Independent Party received 68 votes unofficially, while Republican Lewis C. Ernst tallied 11 unofficially. Mayor Harris issued the following victory statement: "With the election behind us, it is time to put aside partisanship and work together to meet the pressing needs of Ann Arbor, which were discussed in the campaign. Our first task is to secure revenues to enable the city to cope with the rising cost of maintaining existing services. Without a new revenue source the budget we adopt next month must make drastic cuts in existing levéis of service in major, traditional departments. Yet we need to maintain, if not increase, our pólice protection, our fire protection, our road repairs, and our human resources programs concerned with youth employment, discrimination, and drug abuse. "We need to improye our planning process and to adopt a master plan that has broad support in all parts of Ann Arbor. "I extend congratulations to the new councilmen and to the re-elected councilman and look forwárd to working cooperatively and constructively with all citizens of all persuasions to see Ann Arbor through these difficult years of financial crisis and rapid growth of population in Washtenaw County. "It is the genius of our democratie system that we abide by the decisions of the electorate, close ranks, and work together for the whole community. Let us do so now." Loser Garris, a 51-year-old attorney, attributed his defeat to the student vote. He told a reporter he feit "the town people were solidly behind me," but he nevertheless lost many residential precincts - particularly in the Fourth and Fifth Wards - where the student vote was not a factor. "I'm still the spokesman for the Republican party and the Concerned Citizens of Ann Arbor," Garris said. Even a bomb threat hoax at the ] cratic election headquarters last night did not substantially diminish Harris' celebration, at the Delta Upsilon fraternity house on the University campus. The threat was reportedly phoned into the house about 11:20 p.m. Pólice arrived and evacuated the house, ending the victory party, but no bomb was discovered.