Gop Edges Into Control Of Council 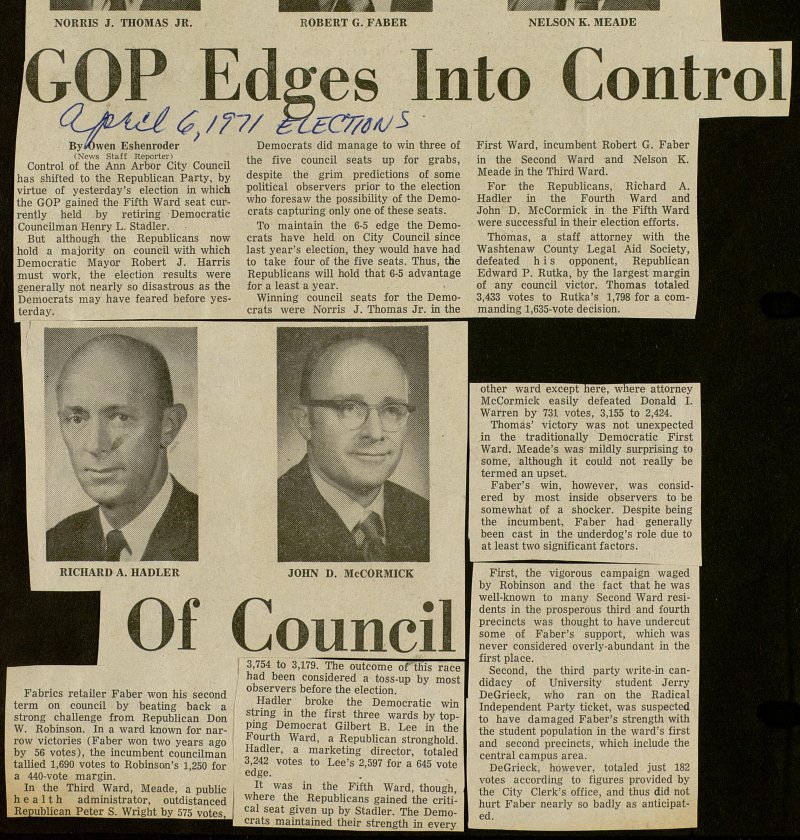 Control of the Ann Arbor City Council has shifted to the Republican Party, by virtue of yesterday's election in which the GOP gained the Fifth Ward seat currently held by retiring Democratie Councilman Henry L. Stadier. But although the Republicans now hold a majority on council with which Democratie Mayor Robert J. Harris must work, the election results were generally not nearly so disastrous as the Democrats may have feared before yesterdav. Democrats did manage to win three of the five council seats up for grabs, despite the grim predictions of some political observers prior to the election who foresaw the possibility of the Democrats capturing only one of these seats. To maintain the 6-5 edge the Democrats have held on City Council since last year's election, they would have had to take four of the five seats. Thus, the Republicans will hold that 6-5 advantage for a least a year. Winning council seats for the Democrats were Norris J. Thomas Jr. in the First Ward, incumbent Robert G. Faber in the Second Ward and Nelson K. Meade in the Third Ward. For the Republicans, Richard A. Hadier in the Fourth Ward and John D. McCormick in the Fifth Ward were successful in their election efforts. Thomas, a staff attorney with the Washtenaw County Legal Aid Society, defeated h i s opponent, Republican Edward P. Rutka, by the largest margin of any council victor. Thomas totaled 3,433 votes to Rutka's 1,798 for a commanding 1,635-vote decisión. I Fabrics retailer Faber won his second term on council by beating back a strong challenge from Republican Don W. Robinson. In a ward known for narro w victories (Faber won two years ago by 56 votes), the incumbent councilman tallied 1,690 votes to Robinson's 1,250 for a 440-vote margin. In the Third Ward, Meade, a public h e a 1 1 h administrator, outdistanced Republican Peter S. Wright by 575 votes 3,754 to 3,179. The outcome of'this race had been considered a toss-up by most observers before the election. Hadier broke the Democratie win string in the first three wards by topping Democrat Gilbert B. Lee in the Fourth Ward, a Republican stronghold. Hadier, a marketing director, totaled 3,242 votes to Lee's 2,597 for a 645 vote edge. It was in the Fifth Ward, though, where the Republicans gained the critical seat given up by Stadier. The Demo_crats maintained their strength in every other ward excepthërê, where attorney McCormick easily defeated Donald I. Warren by 731 votes, 3,155 to 2,424. Thomas' victory was not unexpected in the traditionally Democratie First Ward. Meade's was mildly surprising to some, although it could not really be termed an upset. Faber's win, however, was considered by most inside observers to be somewhat of a shocker. Despite being the incumbent, Faber had generally been cast in the underdog's role due to at least two significant factors. First, the vigorous campaign waged by Robinson and the fact that he was well-known to many Second Ward residents in the prosperous third and fourth precincts was thought to have undercut some of Faber's support, which was never considered overly-abundant in the first place. Second, the third party write-in candidacy of University student Jerry DeGrieck, who ran on the Radical Independent Party ticket, was suspected to have damaged Faber's strength with the student population in the ward's first and second precincts, which include the central campus area. DeGrieck, however, totaled just 182 votes according to figures provided by the City Clerk's office, and thus did not hurt Faber nearly so badly as anticipated.