One Test Of Leadership For Mayor Still To Come 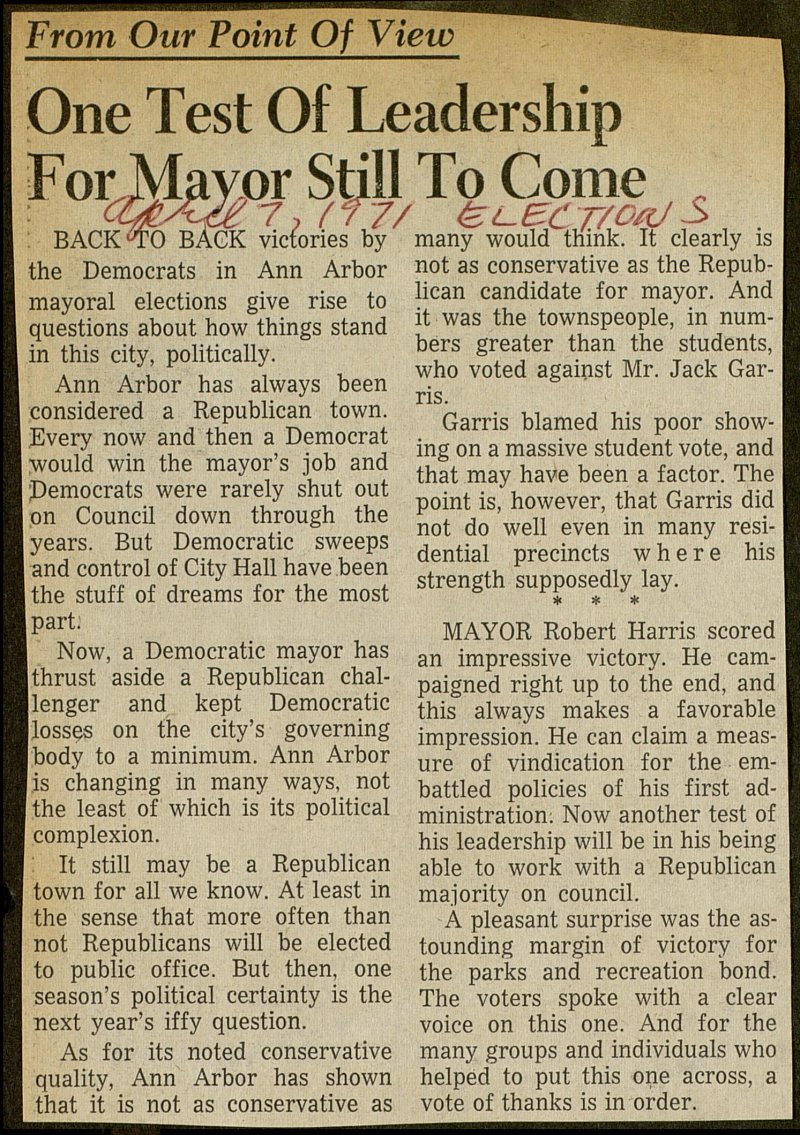 BACK-TO BACK victories by the Democrats in Ann Arbor mayoral elections give rise to questions about how things stand in this city, politically. Ann Arbor has always been considered a Republican town. Every now and then a Democrat would win the mayor's job and Democrats were rarely shut out on Council down through the years. But Democratie sweeps and control of City Hall have been the stuff of dreams for the most part. Now, a Democratie mayor has thrust aside a Republican challenger and kept Democratic losses on the city's governing body to a minimum. Ann Arbor is changing in many ways, not the least of which is its political complexion. It still may be a Republican town for all we know. At least in the sense that more often than not Republicans will be elected to public office. But then, one season's political certainty is the next year's iffy question. As for its noted conservative quality, Ann Arbor has shown that it is not as conservative as many would think. It clearly is I not as conservative as the I lican candidate for mayor. And I it was the townspeople, in 1 bérs greater than the students, I who voted against Mr. Jack 1 ris. Garris blamed his poor 1 ing on a massive student vote, and I that may have been a factor. The I point is, however, that Garris did I not do well even in many 1 dential precincts w h e r e his I strength supposedly lay. MAYOR Robert Harris scored an impressive victory. He campaigned right up to the end, and this always makes a favorable impression. He can claim a measure of vindication for the embattled policies of his first ministration: Now another test of his leadership will be in his being able to work with a Republican majority on council. A pleasant surprise was the astounding margin of victory for the parks and recreation bond. The voters spoke with a clear voice on this one. And for the many groups and individuals who helped to put this one across, a vote of thanks is in order.