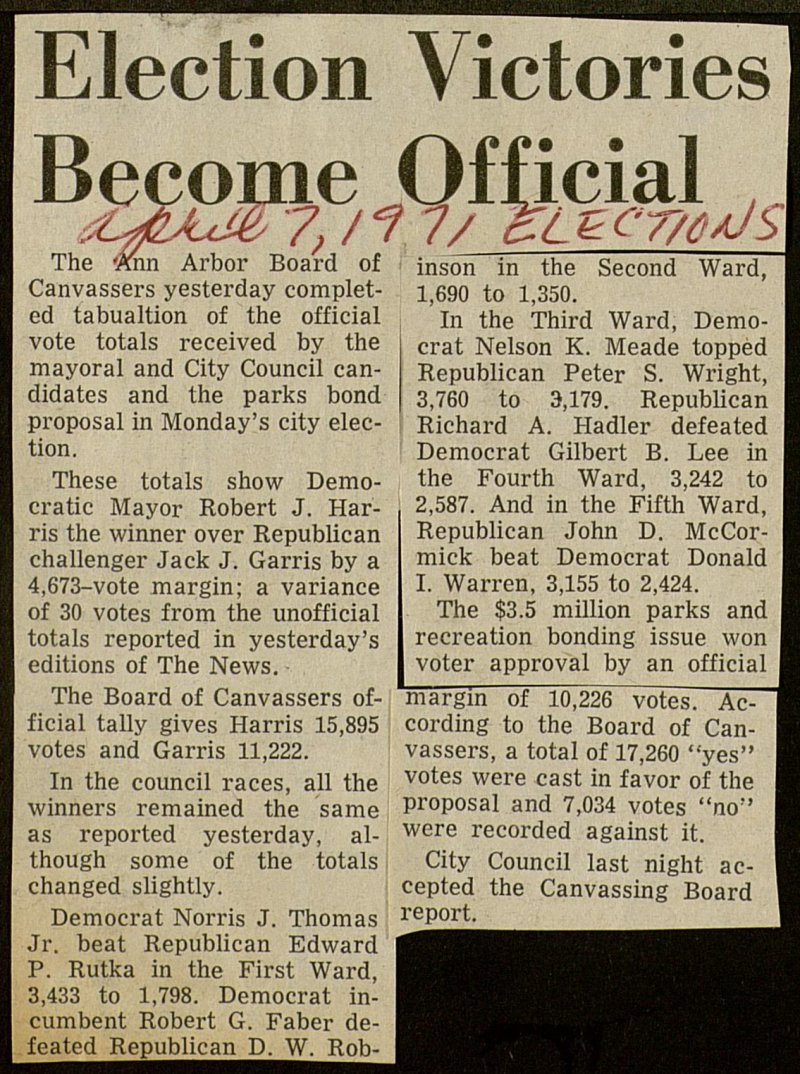 The 'Kan Arbor Board of Canvassers yesterday completed tabualtion of the official vote totals received by the mayoral and City Council candidates and the parks bond proposal in Monday's city election. These totals show Democratie Mayor Robert J. Harris the winner over Republican challenger Jack J. Garrís by a 4,673-vote margin; a variance of 30 votes from the unofficial totals reported in yesterday's editions of The News. The Board of Canvassers official tally gives Harris 15,895 votes and Garris 11,222. In the council races, all the winners remained the same as reported yesterday, although some of the totals changed slightly. Democrat Norris J. Thomas Jr. beat Republican Edward P. Rutka in the First Ward, 3,433 to 1,798. Democrat incumbent Robert G. Faber defeated Republican D. W. inson in the Second Ward, 1,690 to 1,350. In the Third Ward, Democrat Nelson K. Meade toppèd Republican Peter S. Wright, 3,760 to 3,179. Republican Richard A. Hadier defeated Democrat Gilbert B. Lee in the Fourth Ward, 3,242 to 2,587. And in the Fifth Ward, Republican John D. McCormick beat Democrat Donald I. Warren, 3,155 to 2,424. The $3.5 million parks and recreation bonding issue won I voter approval by an official I margin of 10,226 votes. AcI cording to the Board of CanI vassers, a total of 17,260 "yes" I votes were cast in favor of the I proposal and 7,034 votes "no" were recorded against it. City Council last night acI cepted the Canvassing Board I report.