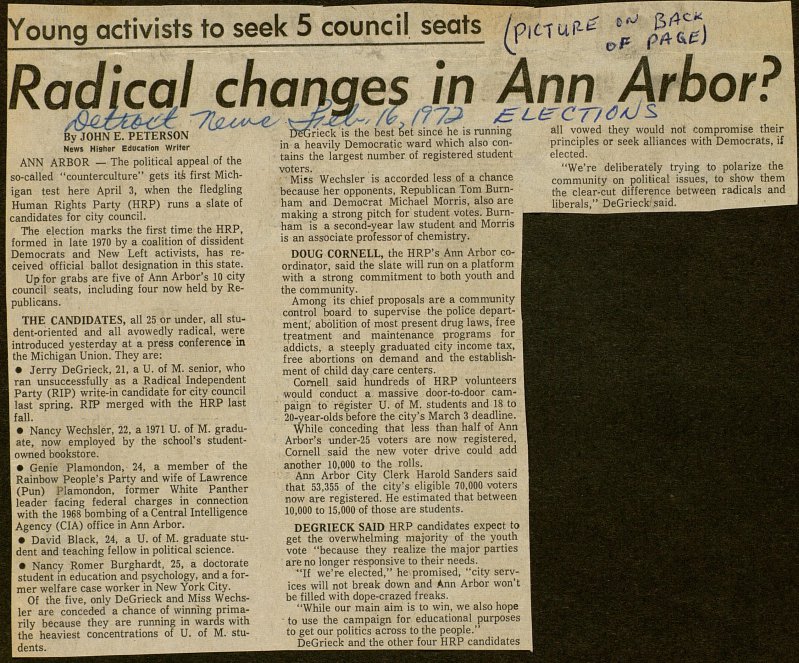 ANN ARBOR - The political appeal of the so-called "counterculture" gets its first Michigan test here April 3, when the fledgling Human Rights Party (HRP) runs a slate of candidates for city council. The election marks the first time the HRP, formed in late 1970 by a coalition of dissident Democrats and New Left activists, has received official ballot designation in this state. Upfor grabs are five of Ann Arbor's 10 city council seats, including four now held by Republicans. THE CANDIDATES, all 25 or under, all student-oriented and all avowedly radical, were introduced yesterday at a press conference in the Michigan Union. They are: Jerry DeGrieck, 21, a U. of M. senior, who ran unsuccessfully as a Radical Independent Party (RIP) write-in candidate for city council last spring. RIP merged with the HRP last fall. Nancy Wechsler, 22, a 1971 U. of M. gradúate, now employed by the school's studentowned bookstore. Genie Plamondon, 24, a member of the Rainbow People's Party and wife of Lawrence 1 (Pun) Plamondon, former White Panther leader facing federal charges in connection with the 1968 bombing of a Central Intelligence Agency (CIA) office in Ann Arbor. David Black, 24, a U. of M. gradúate student and teaching fellow in political science. Nancy Romer Burghardt, 25, a doctórate student in education and psychology, and a former welfare case worker in New York City. Of the five, only DeGrieck and Miss Wechsler are conceded a chance of winning primarily because they are running in wards with the heaviest concentrations of U. of M. students. ÜEGrieck is the best bet since he is running in a heavily Democratie ward which also contains the largest number of registered student voters. Miss Wechsler is accorded less of a chance because her opponents, Republican Tom Burnham and Democrat Michael Morris, also are making a strong pitch for student votes. . ham is a second-year law student and Morris I is an associate professor of chemistry. DOUG CORNELL, the HRP's Ann Arbor Coordinator, said the slate will run on a platform with a strong commitment to both youth and the community. Among its chief proposals are a community control board to supervise the police ment; abólition of most present drug laws, free treatment and maintenance programs for addicts, a steeply graduated city income tax, free abortions on demand and the ment of child day care centers. Comell said hundreds of HRP volunteers would conduct a massive door-to-door cam' páign to register U. of M. students and 18 to 20-year-olds before the city's March 3 deadline. While conceding that less than half of Ann Arbor's under-25 voters are now registered, Cornell said the new voter drive could add another 10,000 to the rolls. Ann Arbor City Clerk Harold Sanders said that 53,355 of the city's eligible 70,000 voters now are registered. He estimated that between 10,000 to 15,000 of those are students. DEGRIECK SAID HRP candidates expect to get the overwhelming majority of the youth vote "because they realize the major parties are no longer responsive to their needs. 'If we're elected," he promised, "city services will not break down and Ann Arbor won't be filled with dope-crazed freaks. "While our main aim is to win, we also hope to use the campaign for educational purposes to get our politics across to the people." DeGrieck and the other four HRP candidates all vowed they would not compromise their principles or seek alliances with Democrats, if elected. "We're deliberately trying to polarize the community on political issues, to show them the clear-cut difference between radicals and liberals," DeGrieck said.