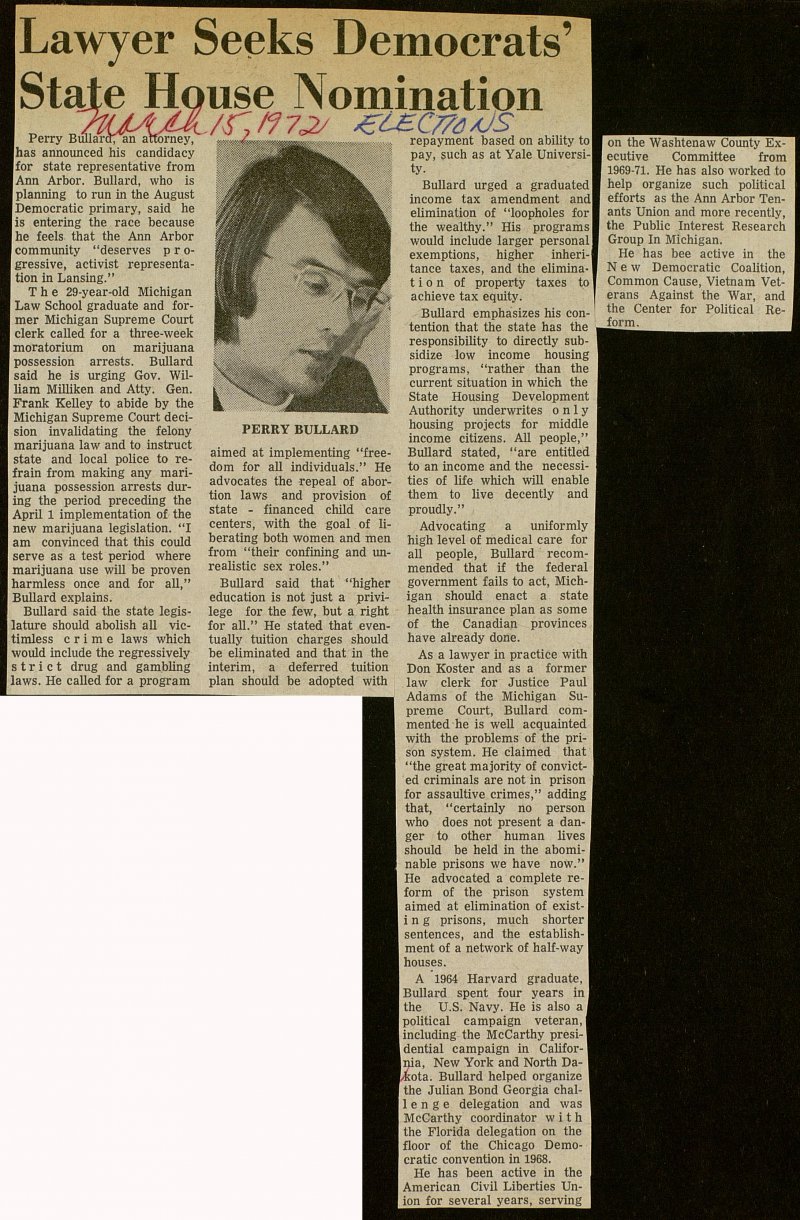 Perry Bullard, an attorney, has announced his candidacy for state representative from Ann Arbor. Bullard, who is planning to run in the August Democratic primary, said he is entering the race because he feels that the Ann Arbor community "deserves progressive, activist representation in Lansing." The 29-year-old Michigan Law School graduate and former Michigan Supreme Court clerk called for a three-week moratorium on marijuana possession arrests. Bullard said he is urging Gov. William Milliken and Atty. Gen. Frank Kelley to abide by the Michigan Supreme Court decision invalidating the felony marijuana law and to instruct state and local police to refrain from making any marijuana possession arrests during the period preceding the April 1 implementation of the new marijuana legislation. "I am convinced that this could serve as a test period where marijuana use will be proven harmless once and for all," Bullard explains. Bullard said the state legislature should abolish all victimless crime laws which would include the regressively strict drug and gambling laws. He called for a program aimed at implementing "freedom for all individuals." He advocates the repeal of abortion laws and provision of state - financed child care centers, with the goal of liberating both women and men from "their confining and unrealistic sex roles." Bullard said that "higher education is not just a privilege for the few, but a right for all." He stated that eventually tuition charges should be eliminated and that in the interim, a deferred tuition plan should be adopted with repayment based on ability to pay, such as at Yale University. Bullard urged a graduated income tax amendment and elimination of "loopholes for the wealthy." His programs would include larger personal exemptions, higher inheritance taxes, and the elimination of property taxes to achieve tax equity. Bullard emphasizes his contention that the state has the responsibility to directly subsidize low income housing programs, "rather than the current situation in which the State Housing Development Authority underwrites only housing projects for middle income citizens. All people," Bullard stated, "are entitled to an income and the necessities of life which will enable them to live decently and proudly." Advocating a uniformly high level of medical care for all people, Bullard recommended that if the federal government fails to act, Michigan should enact a state health insurance plan as some of the Canadian provinces have already done. As a lawyer in practice with Don Koster and as a former law clerk for Justice Paul Adams of the Michigan Supreme Court, Bullard commented he is well acquainted with the problems of the prison system. He claimed that "the great majority of convicted criminals are not in prison for assaultive crimes," adding that, "certainly no person who does not present a danger to other human lives should be held in the abominable prisons we have now." He advocated a complete reform of the prison system aimed at elimination of existing prisons, much shorter sentences, and the establishment of a network of half-way houses. A 1964 Harvard graduate, Bullard spent four years in the U.S. Navy. He is also a political campaign veteran, including the McCarthy presidential campaign in California, New York and North Dakota. Bullard helped organize the Julian Bond Georgia challenge delegation and was McCarthy coordinator with the Florida delegation on the floor of the Chicago Democratic convention in 1968. He has been active in the American Civil Liberties Union for several years, serving on the Washtenaw County Executive Committee from 1969-71. He has also worked to help organize such political efforts as the Ann Arbor Tenants Union and more recently, the Public Interest Research Group In Michigan. He has bee active in the New Democratic Coalition, Common Cause, Vietnam Veterans Against the War, and the Center for Political Reform.