Water And Recreation Issues Must Have Affirmative Vote 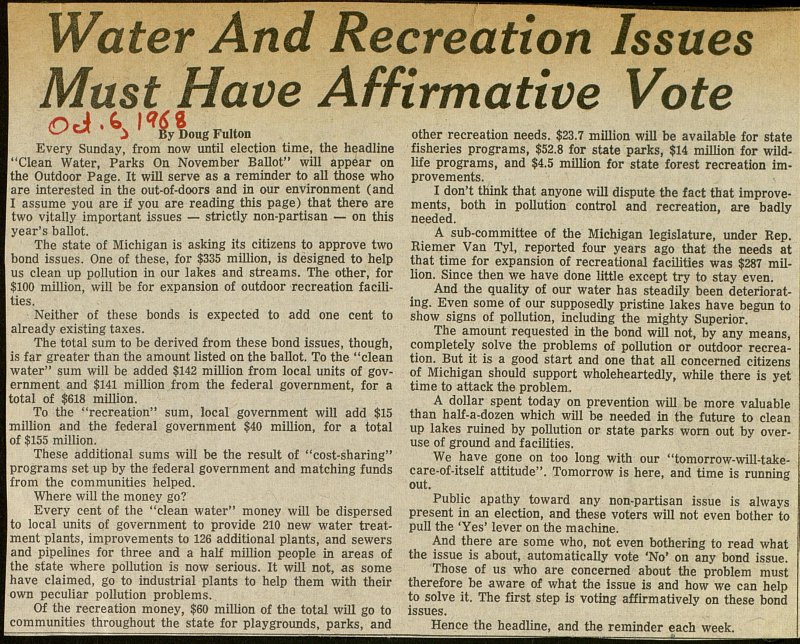 Jivery Sunday, trom now until election time, tñe neadime "Clean Water, Parks On November Ballot" will appear on the Outdoor Page. It will serve as a reminder to all those who are interested in the out-of-doors and in our environment (and I assume you are if you are reading this page) that there are two vjtally important issues - strictly non-partisan - on this year's ballot. The state of Michigan is asking its citizens to approve two bond issues. One of these, for $335 million, is désigned to help us clean up pollution in our lakes and streams. The other, for $100 million, will be for expansión of outdoor recreation facilities. Neither of these bonds is expected to add one cent to already existing taxes. The total sum to be derived from these bond issues, though, is far greater than the amount Usted on the ballot. To the "clean water" sum will be added $142 million from local units of government and $141 million from the federal government, for a total of $618 million. To the "recreation" sum, local government will add $15 million and the federal government $40 million, for a total of $155 million. These additional sums will be the result of "cost-sharing" programs set up by the federal government and matching funds from the communities helped. Where will the money go? Every cent of the "clean water" money will be dispersed to local units of government to provide 210 new water treatment plants, improvements to 126 additional plants, and sewers and pipelines for three and a half million people in areas of the state where pollution is now serious. It will not, as some have claimed, go to industrial plants to help them with their own peculiar pollution problems. Of the recreation money, $60 million of the total will go to communities throughout the state for playgrounds, parks, and other recreation needs. $23.7 million will be available for state fisheries programs, $52.8 for state parks, $14 million for wildlife programs, and $4.5 million for state forest recreation improvements. I don't think that anyone will dispute the f act that improvements, both in pollution control and recreation, are badly needed. A sub-committee of the Michigan legislature, under Rep. Riemer Van Tyl, reported four years ago that the needs at that time for expansión of recreational faciüties was $287 million. Since then we have done little except try to stay even. And the quality of our water has steadily been deteriorating. Even some of our supposedly pristine lakes have begun to show signs of pollution, including the mighty Superior. The amount requested in the bond will not, by any means, completely solve the problems of pollution or outdoor recreation. But it is a good start and one that all concerned citizens of Michigan should support wholeheartedly, while there is yet time to attack the problem. A dollar spent today on prevention will be more valuable than half-a-dozen which will be needed in the future to clean up lakes ruined by pollution or state parks worn out by overuse of ground and facilities. We have gone on too long with our "tomorrow-will-takecare-of-itself attitude". Tomorrow is here, and time is running out. Public apathy toward any non-partisan issue is always present in an election, and these voters will not even bother to pull the 'Yes' lever on the machine. And there are some who, not even bothering to read what the issue is about, automatically vote 'No' on any bond issue. Those of us who are concerned about the problem must therefore be aware of what the issue is and how we can help to solve it. The first step is voting affirmatively on these bond issues. Henee the headline, and the reminder each week.