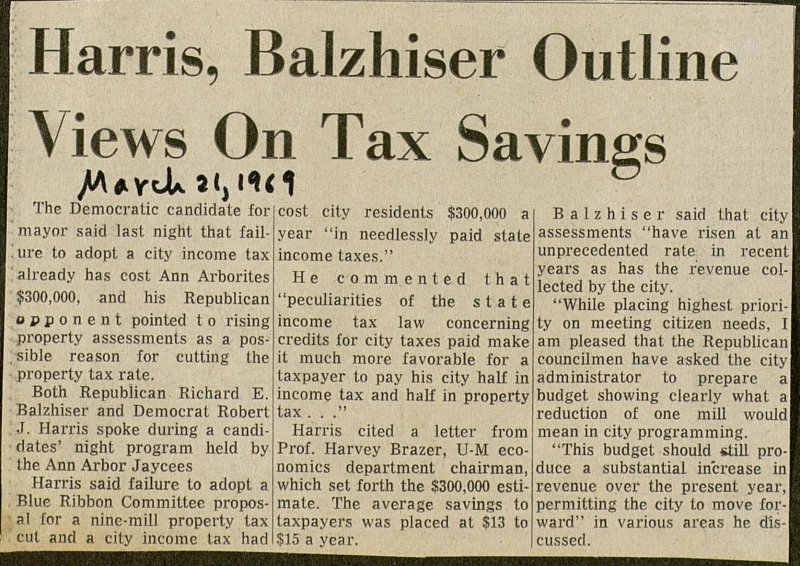 The Democratie candidate íor mayor said last night that íailure to adopt a city income tax ' already has cost Ann Arborites $300,000, and his Republican opponent pointed t o rising property assessments as a posible reason for cutting the property tax rate. Both Republican Richard E. Balzhiser and Democrat Robert J. Harris spoke during a candidates' night program held by the Ann Arbor Jaycees Harris said failure to adopt a Blue Ribbon Committee proposal for a nine-mill property tax cut and a city income tax had cost city residents $300,000 a year "in needlessly paid state income taxes." He commented that "peculiarities of the state income tax law concerning credits for city taxes paid make it much more favorable for a taxpayer to pay his city half in income tax and half in property tax . . ." Harris cited a letter from Prof. Harvey Brazer, U-M economics department chairman, which set forth the $300,000 estímate. The average savings lo laxpayers was placed at $13 to $15 a year. Balzhiser said that city assessments "have risen at an unprecedented rate in recent years as has the revenue collected by the city. "While placing highest priority on meeting citizen needs, I am pleased that the Republican councilmen have asked the city administrator to prepare a budget showing clearly what a reduction of one mili would mean in city programming. "This budget should till pro-: duce a substantial increase in revenue over the present year, permitting the city to move iorward" in various áreas he discussed.