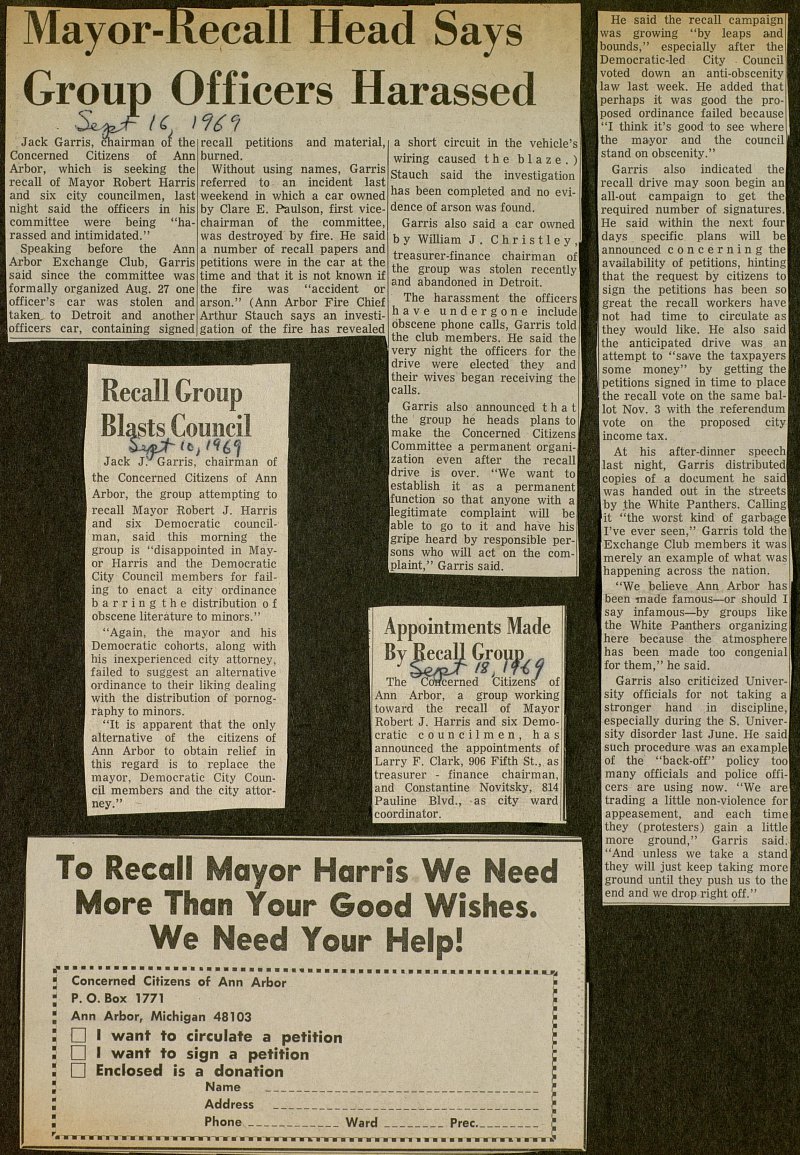 Jack Garris, chairman of the Concerned Citizens of Ann Arbor, which is seeking the recall of Mayor Robert Harris and six city councilmen, last night said the officers in his committee were being "harassed and intimidated." Speaking before the Ann Arbor Exchange Club, Garris said since the committee was formally organized Aug. 27 one officer's car was stolen and taken, to Detroit and another officers car, containing signed recall petitions and material,! burned. Without using ñames, Garrís referred to an incident last weekend in which a car owned by Clare E. Paulson, first vicechairman of the committee, was destroyed by fire. He said a number of recall papers and petitions were in the car at the time and that it is not known if the fire was "accident or arson." (Ann Arbor Fire Chief Arthur Stauch says an investigation of the fire has revealed a short circuit in the vehicle's wiring caused the blaze.) Stauch said the investigation has been completed and no evidence of arson was found. Garrís also said a car owned b y William J. Christley treasurer-finance chairman of the group was stolen recently and abandoned in Detroit. The harassment the officers have undergone include obscene phone calls, Garrís told the club members. He said the very night the officers for the drive were elected they and their wives began receiving the calis. Garrís also announced that the group he heads plans to 1 make the Concerned Citizensl Committee a permanent organi-l zation even after the recalll drive is over. "We want tol establish it as a permanentl function so that anyone with al legitimate complaint will bel able to go to it and have hisl gripe heard by responsible per-i sons who will act on the com-l plaint," Garrís said. He said the recall campaignl was growing "by leaps and I bounds," especially after the I Democratic-led City Councill voted down an anti-obscenityl law last week. He added thatl perhaps it was good the 1 posed ordinance failed because II "I think it's good to see where II the mayor and the councili stand on obscenity." Garrís also indicated thel recall drive may soon begin anl all-out campaign to get thel required number of signatures.l He said within the next fourl days specific plans will bel announced concerning thel availability of petitions, hintingl that the request by citizens tol sign the petitions has been sol great the recall workers have I not had time to circuíate asi they would like. He also said I the anticipated drive was anl attempt to "sa.ve the taxpayersl some money" by getting thel petitions signed in time to placel the recall vote on the same bal-I lot Nov. 3 with the referendum I vote on the proposed cityl income tax. At his after-dinner speechl last night, Garrís distributedl copies of a document he saidl Iwas handed out in the streetsl by the White Panthers. Callingl lit "the worst kind of garbagel I've ever seen," Garrís told thel Exchange Club members it was merely an example of what was I [happening across the nation. I "We believe Ann Arbor has I Ibeen made famous- or should I Isay infamous- by groups like I the White Panthers organizingl Ihere because the atmospherel has been made too congenial I for them," he said. : Garrís also criticized Univer-I sity officials for not taking al stronger hand in discipline,! especially during the S. Univer-I sity disorder last June. He saidl such procedure was an examplel of the "back-off" policy tooi many officials and pólice offi-l cers are using now. "We arel trading a little non-violence forl appeasement, and each timej [they (pro testers) gain a little I Imore ground," Garrís said.j l"And unless we take a stand] Ithey will just keep taking morel ground until they push us to thel lend and we drop right off.1' I To Recall Mayor Harris We Need More Than Your Good Wishes. We Need Your Help! ■■■■■■ . . . . ....... uM.mMM.mmm m tuujuL j Concerned Citizens of Ann Arbor ; ; P.O. Box 1771 ! Ü Ann Arbor, Michigan 48103 ■ : D I want to circuíate a petition : 2 □ I want to sign a petition C ï G Enclosed is a donation '. Name " ", Address ■' '. Phone Ward Pree r-nririrTr ■-■-wTrTr w-wTrTrirTnrTr ■- irirrwiriririrTrw