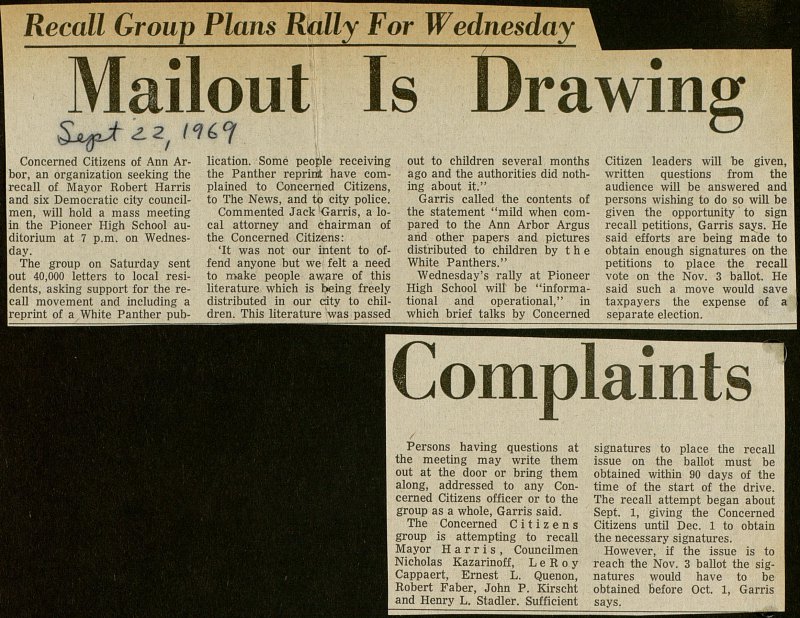 Concerned Citizens of Ann Arbor, an organization seeking the recall of Mayor Robert Harris and six Democratie city councilmen, will hold a mass meeting in the Pioneer High School auditorium at 7 p.m. on Wednesday. The group on Saturday sent out 40,000 letters to local residents, asking support for the recall movement and including a jreprint of a White Panther lication. Somé people receiving the Panther reprint have complained to Concerned Citizens, to The News, and to city pólice. Commented Jack Garrís, a local attorney and chairman of the Concerned Citizens: 'It was not our intent to offend anyone but we feit a need to make people aware of this literature which is being freely distributed in our city to children. This literature 'was passed out to children several months ago and the authorities did nothing about it." Garrís called the contents of the statement "mild when compared to the Ann Arbor Argus and other papers and pictures distributed to children by t h e White Panthers." Wednesday's rally at Pioneer High School will be "informational and operational," in which brief talks by Concerned Citizen leaders will be given, written questions from the audience will be answered and persons wishing to do so will be given the opportunity to sign reeall petitions, Garrís says. He said efforts are being made to obtain enough signatures on the petitions to place the reeall vote on the Nov. 3 ballot. He said such a move would save taxpayers the expense of a separate election. Persons having questions at the meeting may write them out at the door or bring them along, addressed to any Concerned Citizens officer or to the group as a whole, Garrís said. The Concerned Citizens group is attempting to recall Mayor H a r r i s , Councilmen Nicholas Kazarinoff, L e R o y Cappaert, Ernest L. Quenon, Robert Faber, John P. Kirscht and Henry L. Stadier. Sufficient signatures to place the recall issue on the ballot must be obtained within 90 days of the time of the start of the drive. The recall attempt began about Sept. l, giving the Concerned Citizens until Dec. 1 to obtain the necessary signatures. However, if the issue is to reach the Nov. 3 ballot the signatures would have to be obtained before Oct. 1, Garris says.