They Admit It's Obscene 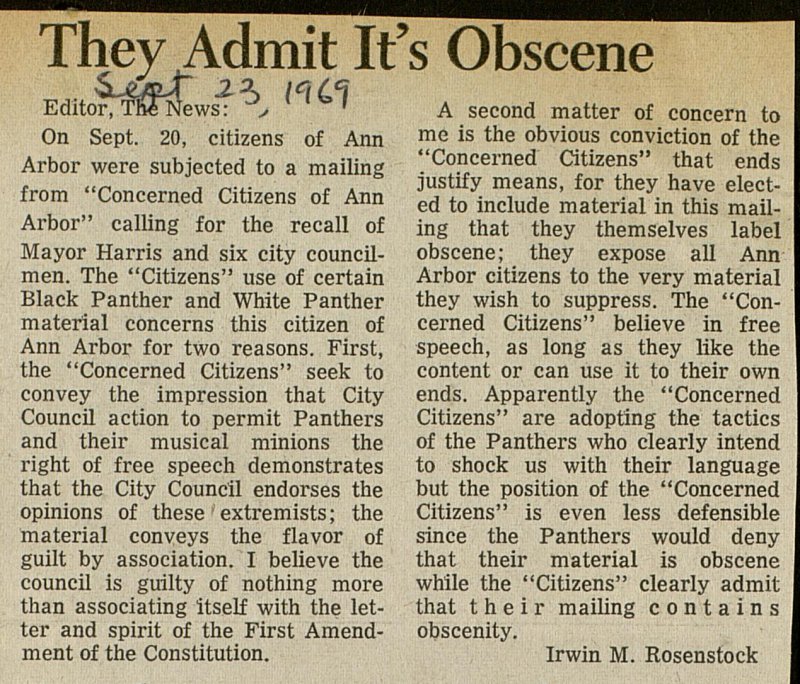 EditorraaewsT0, (lt' On Sept. 20, citizens of Ann Arbor were subjected to a mailing from "Concerned Citizens of Ann Arbor" calling for the recall of Mayor Harris and six city councilmen. The "Citizens" use of certain Black Panther and White Panther material concerns this citizen of Ann Arbor for two reasons. First, the "Concerned Citizens" seek to convey the impression that City Council action to permit Panthers and their musical minions the right of free speech demonstrates that the City Council endorses the opinions of these extremists; the material conyeys the flavor of guilt by association. I believe the council is guilty of nothing more than associating itself with the letter and spirit of the First Amendment of the Constitution. A second matter of concern teme is the obvious conviction of the "Concerned Citizens" that ends justify means, for they have elected to include material in this mailing that they themselves label obscene; they exposé all Ann Arbor citizens to the very material they wish to suppress. The "Concerned Citizens" believe in free speech, as long as they like the content or can use it to their own ends. Apparently the "Concerned Citizens" are adopting the tactics of the Panthers who clearly intend to shock us with their language but the position of the "Concerned Citizens" is even less defensible since the Panthers would deny that their material is obscene while the "Citizens" clearly admit that their mailing contains obscenitv.