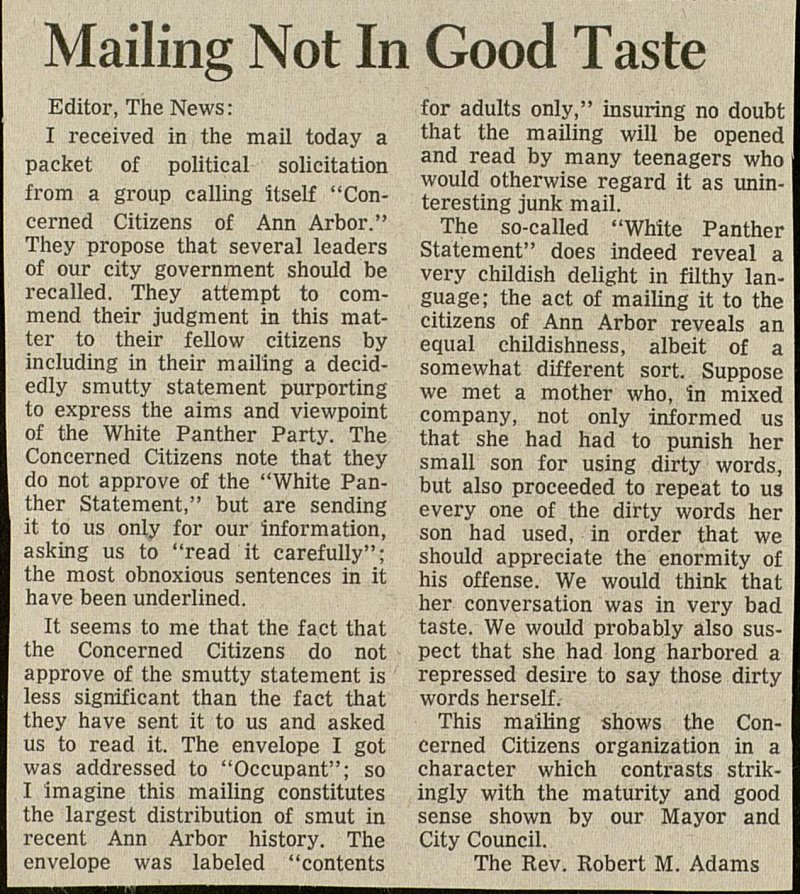 Editor, The News: I received in the mail today a packet of political solicitation from a group calling itself "Concerned Citizens of Ann Arbor." They propose that several leaders of our city government should be recalled. They attempt to commend their judgment in this matter to their fellow citizens by including in their mailing a decidedly smutty statement purporting to express the aims and viewpoint of the White Panther Party. The Concerned Citizens note that they do not approve of the "White Panther Statement," but are sending it to us only for our Information, asking us to "read it carefully"; the most obnoxious sentences in it have been underlined. It seems to me that the fact that the Concerned Citizens do not approve of the smutty statement is less significant than the fact that they have sent it to us and asked us to read it. The envelope I got was addressed to "Occupant"; so I imagine this mailing constitutes the largest distribution of smut in recent Ann Arbor history. The envelope was labeled "contents for adults only," insuring no doubt that the mailing will be opened and read by many teenagers who would otherwise regard it as uninteresting junk mail. The so-called "White Panther Statement" does indeed reveal a very childish delight in filthy language; the act of mailing it to the citizens of Ann Arbor reveáis an. equal childishness, albeit of a somewhat different sort. Suppose we met a mother who, in mixed company, not only informed us that she had had to punish her small son for using dirty words, but also proceeded to repeat to us every one of the dirty words her son had used, in order that we should appreciate the enormity of his offense. We would think that her conversation was in very bad taste. We would probably also suspect that she had long harbored a repressed desire to say those dirty words herself. This mailing shows the Concerned Citizens organization in a character which contrasts strikingly with the maturity and good sense shown by our Mayor and City Council.