Concerned Citizens' Rally Has 'Punch' In Its Start 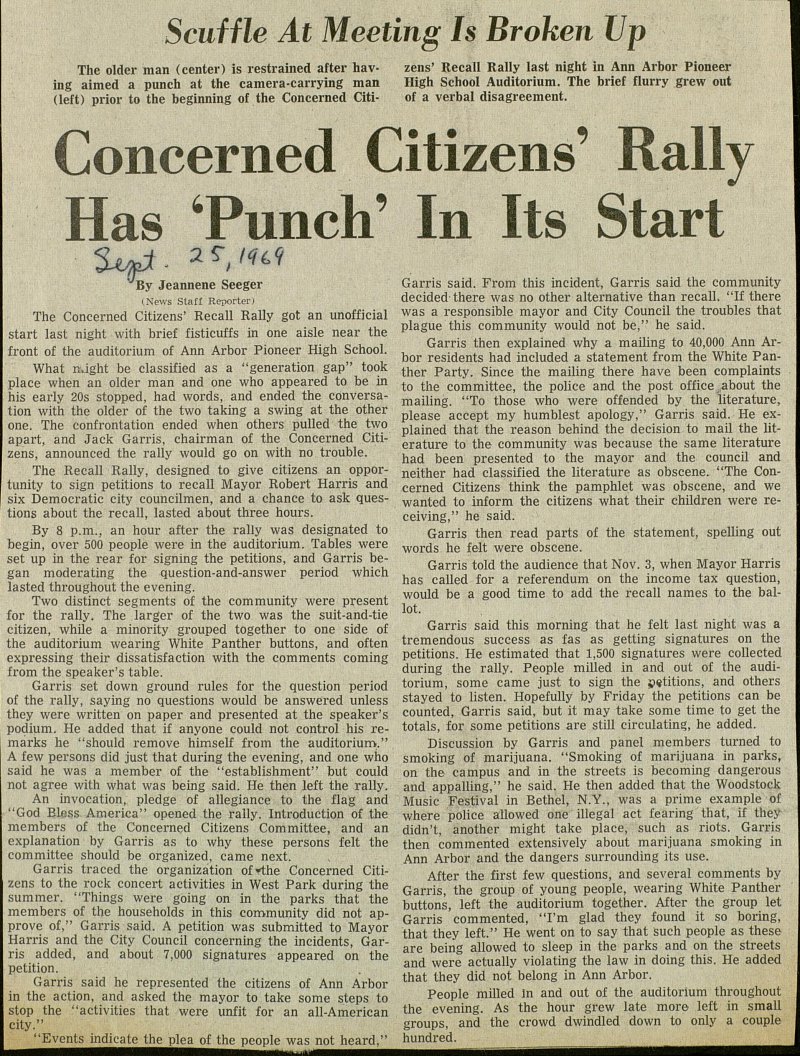 The Concerned Citizens' Recall Rally got an unofficial start last night with brief fisticuffs in one aisle near the front of the auditorium of Ann Arbor Pioneer High School. What ndght be classified as a "generation gap" took place when an older man and one who appeared to be in his early 20s stopped, had words, and ended the conversation with the older of the two taking a swing at the other one. The confrontation ended when others pulled the two apart, and Jack Garris, chairman of the Concerned Citizens, announced the rally would go on with no trouble. The Recall Rally, designed to give citizens an opportunity to sign petitions to recall Mayor Robert Harris and six Democratie city councilmen, and a chance to ask questions about the recall, lasted about three hours. By 8 p.m., an hour after the rally was designated to begin, over 500 people were in the auditorium. Tables were set up in the rear for signing the petitions, and Garris began moderating the question-and-answer period which lasted throughout the evening. Two distinct segments of the community were present for the rally. The larger of the two was the suit-and-tie citizen, while a minority grouped together to one side of the auditorium wearing White Panther buttons, and often expressing their dissatisfaction with the comments coming from the speaker's table. Garris set down ground rules for the question period of the rally, saying no questions would be answered unless they were written on paper and presented at the speaker's podium. He added that if anyone could not control his remarks he "should remove himself from the auditorium." A few persons did just that during the evening, and one who said he was a member of the "establishment" but could not agree with what was being said. He then left the rally. An invocation, pledge of allegiance to the flag and "God Bless America" opened the rally. Introduction of the members of the Concerned Citizens Committee, and an explanation by Garris as to why these persons feit the committee should be organized, came next. Garris traced the organizátion of the Concerned Citizens to the rock concert activities in West Park during the summer. "Things were going on in the parks that the members of the households in this community did not approve of," Garris said. A petition was submitted to Mayor Harris and the City Council concerning the incidents, Garris added, and about 7,000 signatures appeared on the petition. Garris said he represented the citizens of Ann Arbor in the action, and asked the mayor to take some steps to stop the "activities that were unfit for an all-American city." "Events indícate the plea of the people was not heard," Garrís said. From this incident, Garrís said the community decided there was no other alternative than recall. "If there was a responsible mayor and City Council the troubles that plague this community would not be," he said. Garrís then explained why a mailing to 40,000 Ann Arbor residents had included a statement from the White Panther Party. Since the mailing there have been complaints to the committee, the pólice and the post office ,about the mailing. "To those who were offended by the literature, please accept my humblest apology," Garris said. He explained that the reason behind the decisión to mail the literature to the community was because the same literature had been presented to the mayor and the council and neither had classified the literature as obscene. "The Concerned Citizens think the pamphlet was obscene, and we wanted to inform the citizens what their children were receiving," he said. Garris then read parts of the statement, spelling out words he feit were obscene. Garris told the audience that Nov. 3, when Mayor Harris has called for a referendum on the income tax question, would be a good time to add the recall names to the ballot. Garris said this morning that he feit last night was a tremendous success as fas as getting signatures on the petitions. He estimated that 1,500 signatures were collected during the rally. People milled in and out of the auditorium, some came just to sign the jititions, and others stayed to listen. Hopefully by Friday the petitions can be counted, Garris said, but it may take some time to get the totals, for some petitions are still circulating, he added. Discussion by Garris and panel members turned to smoking of marijuana. "Smoking of marijuana in parks, on the campus and in the streets is becoming dangerous and appalling," he said. He then added that the Woodstock Music Festival in Bethel, N.Y., was a prime example of where pólice allowed one illegal act fearing that, if they didn't, another might take place, such as riots. Garris then commented extensively about marijuana smoking in Ann Arbor and the dangers surrounding its use. After the first few questions, and several comments by Garris, the group of young people, wearing White Panther buttons, left the auditorium together. After the group let Garris commented, "I'm glad they found it so boring, that they left." He went on to say that such people as these are being allowed to sleep in the parks and on the streets and were actually violating the law in doing this. He added that they did not belong in Ann Arbor. People milled in and out of the auditorium throughout the evening. As the hour grew late more left in small groups, and the crowd dwindled down to only a couple hundred.