Romney To Stay Out Of Wife's Campaign, Action Please 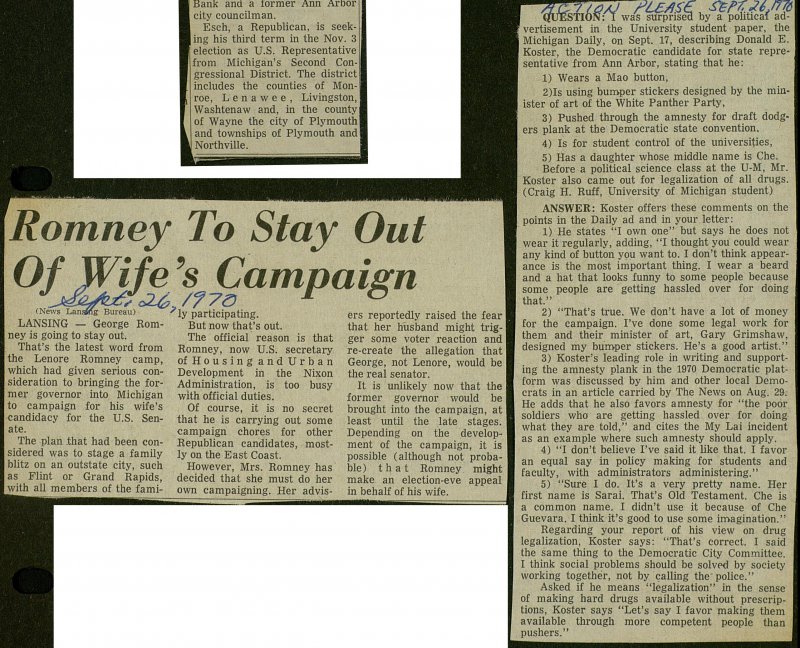 LANSING - George Romney is going to stay out. That's the latest word from the Lenore Romney camp, which had given serious consideration to bringing the former governor into Michigan to campaign for his wife's candidacy for the U.S. Senate. The plan that had been considered was to stage a family blitz on an outstate city, such as Flint or Grand Rapids, with all members of the 'ly participating. But now that's out. The official reason is that Romney, now U.S. secretary ofHousing andUrban Development in the Nixon Administration, is too busy with official duties. Of course, it is no secret that he is carrying out some campaign chores for other Hepublican candidates, mostly on the East Coast. However, Mrs. Romney has decided that she must do her own campaigning. Her ers reportedly raised the fear that her husband might trigger some voter reaction and re-create the allegation that George, not Lenore, would be the real senator. It is unlikely now that the former governor would be brought into the campaign, at least until the late stages. Depending on the development of the campaign, it is possible (although not probable) that Romney might make an election-eve appeal in behalf of his wife. IQUESTION : I was surprised by a politicaí advertisement in the University student paper, the Michigan Daily, on Sept. 17, describing Donald E. Koster, the Democratie candidate for state representative f rom Ann Arbor, stating that he: 1) Wears a Mao button, 2)Is using bumper stickers designed by the minister of art of the White Panther Party, 3) Pushed through the amnesty for draft dodgers plank at the Democratie state convention, 4) Is for student control of the universities, 5) Has a daughter whose middle name is Che. Before a politicaí science class at the U-M, Mr. Koster also came out for legalization of all drugs. (Craig H. Ruif, University of Michigan student) ANSWER: Koster offers these comments on the points in the Daily ad and in your letter: 1) He states "I own one" but says he does not wear it regularly, adding, "I thought you could wear any kind of button you want to. I don't think appearance is the most important thing. I wear a beard and a hat that looks funny to some people because some people are getting hassled over for doing that." 2) "That's true. We don't have a lot of money for the campaign. Tve done some legal work for them and their minister of art, Gary Grimshaw, designed my bumper stickers. He's a good artist." 3) Koster's leading role in writing and supporting the amnesty plank in the 1970 Democratie platform was discussed by him and other local Democrats in an article carried by The News on Aug. 29. He adds that he also favors amnesty for "the poor soldiers who are getting hassled over for doing what they are told," and cites the My Lai incident as an example where such amnesty should apply. 4) "I don't believe I've said it like that. I favor an equal say in policy making for students and faculty, with administrators administering." 5) "Sure I do. It's a very pretty name. Her first name is Sarai. That's Old Testament. Che is a common name. I didn't use it because of Che Guevara. I think it's good to use some imagination." Regarding your report of his view on drug legalization, Koster says: "That's correct. I said the same thing to the Democratie City Committee. I think social problems should be solved by society working togethér, not by calling the pólice." Asked if he means "legalization" in the sense of making hard drugs available without prescriptions, Koster says "Let's say I favor making them available through more competent people than pushers."